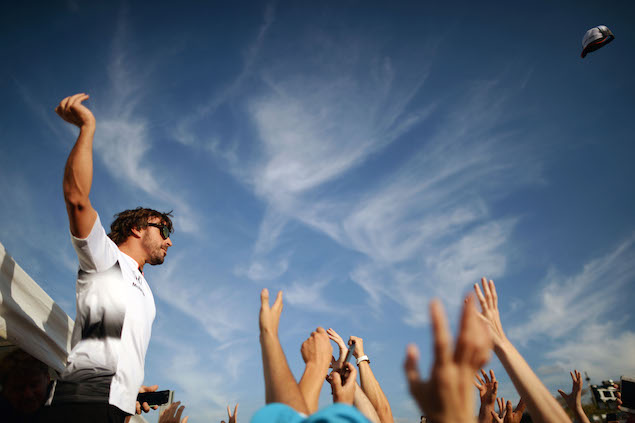 Fernando Alonso
“It’s been a hectic weekend already on our side of the garage, with a power unit change between the two sessions. I didn’t feel there was anything wrong with the engine in FP1, but after the session the data showed some anomalies and Honda therefore preferred to change it for FP2.

“Our positions today look reasonably good but we need to wait and see what happens tomorrow. There’s still quite a lot to do to improve things, especially on the set-up, but we have a few ideas.

“We’ll fight hard to get into Q3 tomorrow, and I think we’ll have a chance to make it, as we’ve done successfully already a few times in the past few races.

“Overtaking on this track is very difficult, so starting as close as possible to the front is paramount.”

Jenson Button
“I’m pretty happy with the way the car feels, on both long runs and low-fuel runs. Having said that, tyre degradation is definitely going to be important here on Sunday: it seems the Soft tyre has very good degradation, but the Supersoft is struggling just a bit.

“As always, the Hungaroring circuit is great fun to drive – and it’s giving us a good feeling as well, especially now that the track surface is gripping up. As for the asphalt itself, I like the new smoother surface – and it seems to be working for us, too.

“It’s pretty tight in the midfield – we ended up seventh and eighth both this morning and this afternoon, and everyone behind us was very close – so the closest fight is definitely behind us, not in front of us.

“Our goal is to qualify as well as we can, then score some good world championship points. I think we should be able to do that – that’s our aim certainly.”

Eric Boullier, racing director
“Today was a successful day as far as our run programmes were concerned.

“In both FP1 this morning and FP2 this afternoon, both our cars ran well for the most part. We made good progress, and both drivers reported satisfactory handling balance by the day’s end.

“Perhaps the sinuous topography of the notoriously serpentine Hungaroring suits our car’s performance envelope rather better than do the layouts of most other circuits – but, if so, we’ll take the smooth with the rough whenever it comes our way.

“We’ll now crunch the data we obtained today, in an effort to build on our encouraging start, our target being to qualify both our cars tomorrow in positions advantageous enough from which to launch a dual bid for a decent clutch of world championship points on Sunday.”

“It is yet difficult to predict where we are performance-wise this weekend, but both drivers were relatively appreciative of the feeling they had in the car. So far, a good start to the weekend.

“On the last lap of FP1 Fernando's ICE showed a data anomaly; therefore, we elected to swap the full power unit to run in the afternoon's FP2 session. The data will be further investigated.”