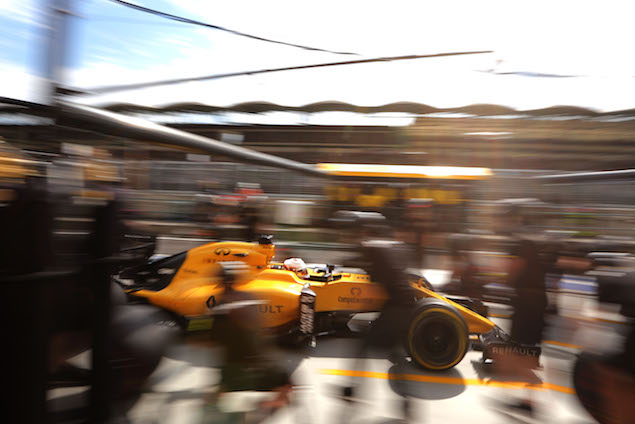 Kevin Magnussen
“It was quite a relaxed morning for me watching my car being driven by Esteban then a full and productive afternoon back behind the wheel. We completed a good number of laps, which was useful as we’re learning the new track surface here. The surface does let us go faster but there were a few moments learning just how hard we could push. I’m happy with my day’s work and, as usual, we’ll be looking to unlock a little more pace ahead of qualifying.”

Jolyon Palmer
“Obviously today was pretty far from ideal as we only got six laps on track in the morning then twelve in the afternoon but I know the track and the car feels pretty decent so it’s not the end of the world. I started my day hoping that there would be no issues with the car and that the bad luck was behind me, then we continued to have a recurring fuel issue, which was a bit of a pain. We haven’t learnt too much over my side of the garage today but we seem to have got to the bottom of the fuel pressure issue so that’s a definite positive from the hard work.”

Esteban Ocon
“It was good to get some time in the car here and it’s a great track. It was pretty slippery when it was damp at the beginning of the session but we were able to run through a good programme. I’m happy with my time in the car and I was able to give the engineers what was hopefully good feedback.”

Nick Chester, Technical Director
“It was a fairly mixed day for us. On one hand, things were difficult for Jolyon as he lost a lot of running time with fuel system problems. We did eventually fix it and ensured he had enough runs to gain a reasonable feel for the car on both tyres, ready for tomorrow. A fuel system issue tends to be difficult to trace because it has to be checked in the garage but until the system is under full load on track and drawing its full fuel rate, you can’t be certain that it’s fixed. We systematically changed components and cleared the problem.

On the other side of the garage, Kevin got a lot of running done this afternoon, including a really long stint on soft tyres and we are reasonably happy with what we got under our belts. Esteban also did a good job in the morning and got plenty done. It was a slow start this morning thanks to a slightly damp track but he did everything we asked of him. Once dry, the track’s new surface proved obviously faster than it was last year but didn’t cause any problems otherwise. It’s bound to get even quicker as it rubbers in throughout the weekend.”