Before Formula 1 gets back to business next week at Spa, F1i looks back at a race to remember: the 1998 Belgian Grand Prix. 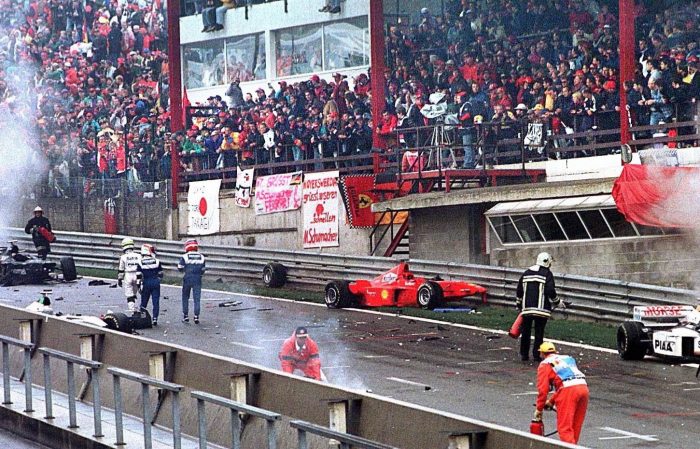 It had it all: a torrential downpour, the biggest crash in F1 history, thrilling fights, controversy  and a milestone win. The 1998 Belgian Grand Prix is considered by many as one of the best races in the history of the sport, although the word "crazy" may also come to mind.

By the time the teams reached the 13th round of the 1998 world championship, and with just four races to go, an exciting two-way battle between McLaren's Mika Hakkinen and Ferrari's Michael Schumacher was reaching its climax.

Behind, faithful tagalongs and team players Eddie Irvine and David Coulthard, left in the wake of their leaders, were all set to protect their team's best interest as they started the final leg of the season.

Qualifying at the daunting Ardennes venue produced a familiar grid with the McLaren boys on pole, Schumacher fourth and Irvine fifth. The sole outsider was Damon Hill who had managed to slot his Jordan into third, although there was little hope the former world champion would keep it there once the lights would turn green. 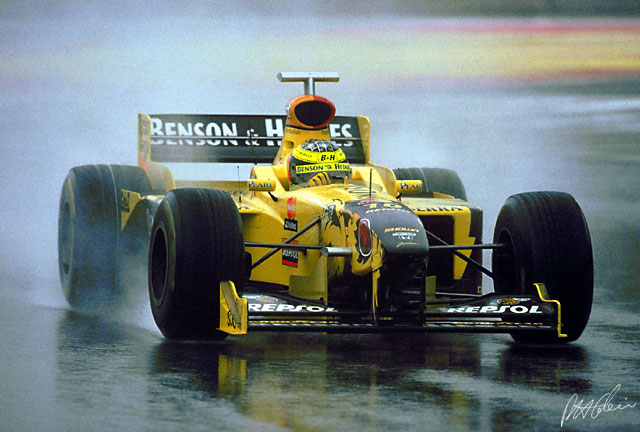 With the dawn of race day came racing's great leveler: rain. Of the torrential kind. Back in those days, there was no overcautious and restrained 'Charlie Whiting' to command a start behind the Safety Car.  Drivers were forced to rely on full wets, instinct and aptitude, and sheer luck to navigate the torrents.

The furious rush down to La Source saw Hakkinen slightly break away from the field while Schumacher made a run towards  a gap on the inside left by Coulthard.  The McLaren and Ferrari plunged down towards Eau Rouge while havoc broke out behind. And chaos.

Coulthard had lost it on the exit of La Source, on a metal grille as he recalled. The McLaren  speared across the track, hit the inside wall and rebounded  into the way of coming traffic. Devastation, the scale of which had never been seen before in a Grand Prix, followed. Drivers covered in spray attempted in vain to take avoiding action, but each individual move only succeeded in extending the disastrous chain reaction.

In a little less than 15 seconds the Belgian GP grid had been decimated with a 13-car pile-up. A disorderly and joyless state of affairs which led to perhaps Murray Walker's greatest quote: "This is the worst start of a Grand Prix that I have ever seen in the whole of my life !"

Eddie Irvine offered a glimpse into the harrowing experience of having an entire field of stricken cars barreling down on you:  "I have to admit, it was a bit scary. I had no brakes, no steering, nothing was working. I was just sitting there hurtling down the track with wheels hitting me on the head and cars going all over the place. There was nothing I could do except sit there and think ‘S**t, where is this taking me?’ It was not pleasant…" 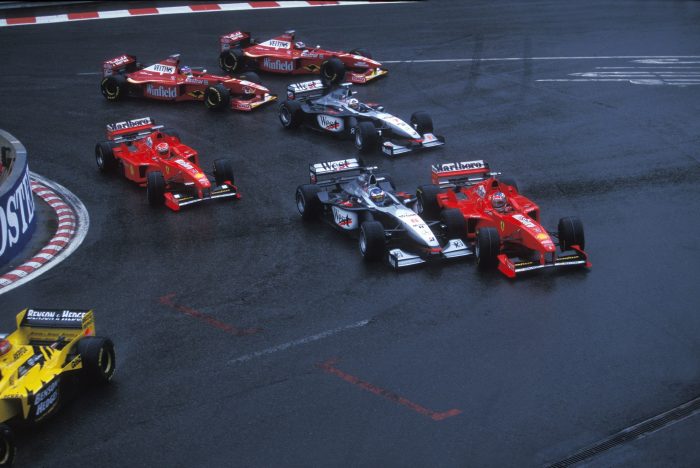 One hour later, a depleted filed was released for a second attempt in getting a proper motor race under way. But disaster struck the McLaren camp at the outset when championship leader Hakkinen tangled with Johnny Herbert's Sauber, leaving both men out on the spot.

Damon Hill led for seven laps before Michael Schumacher took command and raced off into the distance at a blindingly fast pace despite the prevailing wet track. On lap 25, a little over the half-distance mark, as the Ferrari driver was making a joke of the elements and surpassing Hakkinen in the championship, more drama suddenly ensued.

On the run down to Pouhon, Schumacher encountered the lap-down, gremlin-infested McLaren of David Coulthard, who had been told by his team over the radio to slow and let the Ferrari pass. In the heavy spray, unbeknownst to Schumacher, Coulthard duly lifted but remained on the racing line.

The Ferrari violently rammed the rear of the McLaren, ripping off the scarlet red machine's entire front right-wheel assembly. Miraculously, Schumacher managed to return to the pits, along with Coulthard. The German angrily climbed out of his car and stormed off to the McLaren pit to confront the Scot, furiously shouting "are you trying to f*****g kill me?". 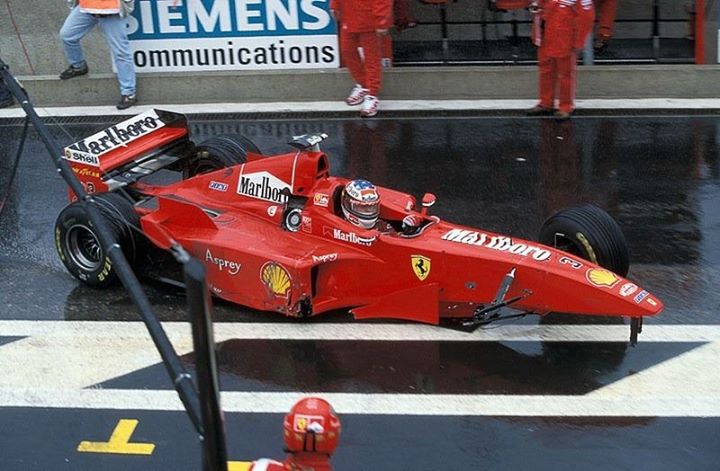 Back out on the race track, it was Damon Hill who was once again in the lead in front of his fast-approaching team mate Ralf Schumacher. The Safety Car was ordered out for four laps following another massive accident involving Giancarlo Fisichella's Benetton and Shinji Nakano's Minardi, which left just six cars running.

But quality supplanted quantity in the closing stages of the race when the Jordan pit wall ordered Hill to relinquish the lead to his faster young team. Hill would have none of it however, putting it to Eddie Jordan in no uncertain terms:  "We have an opportunity to get a first and second  here, or nothing at all!"

Spa is renowned for often throwing up something unexpected. Let's hope next week's edition does the same... 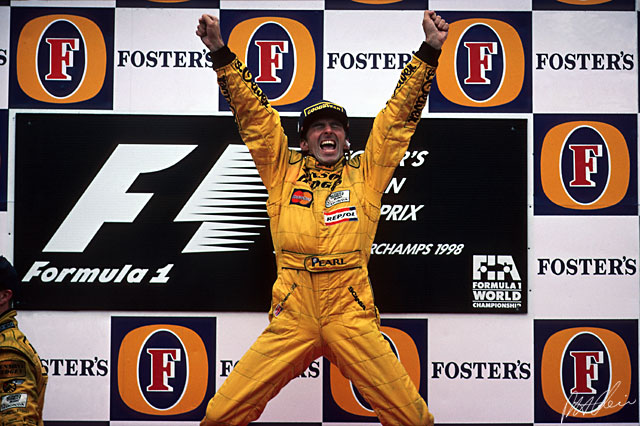