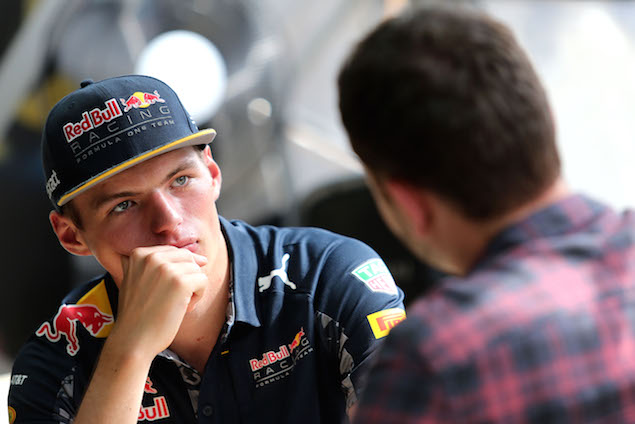 Max Verstappen’s rise to the top in motorsport has been, in a word, incredible. The 18-year-old had just one year in single seater racing before gaining an F1 seat, and he quickly set about proving Red Bull right to have faith in him at such a young age. Four races into his second F1 season and Verstappen was promoted to the senior team, and duly won his first grand prix on debut for Red Bull.

Two years ago yesterday - on 18 August 2014 - Toro Rosso announced Verstappen would race for the team in 2015, leading many to question whether the move was right for someone so young. Verstappen soon silenced those doubters, although he admits he had some slight doubts of his own this year when informed he would be moving up to Red Bull, even if it was an opportunity he would never turn down.

“As soon as I heard I was jumping up I was like ‘I’m ready for it, I want to go for it’, because after a season and a few races I felt ‘OK I think I can make the the jump now’,” Verstappen told F1i. “As a driver you always think you can make the jump. When you get that opportunity you don’t say no and you go for it.

“Of course there's always a bit of a question mark of will I do well against my team-mate or whatever, but I think straight away it went well and I was enjoying it and scoring points. Still now it's all going in the right direction.”

In highlighting the differences between Red Bull and the junior team, Verstappen hints at the previous atmosphere at Toro Rosso perhaps not being as good as it could have been when he was alongside Carlos Sainz, with Helmut Marko having said the pairing needed to be broken up.

“I think in general Toro Rosso is already a good team but then once you step up to Red Bull everything is just one step better in whatever they do, which you expect from a world championship team. That’s nothing bad against Toro Rosso because they were doing the best they could with the possibilities they had.

“In the end the atmosphere in the team is also very good, I’m enjoying it. Daniel [Ricciardo] is a great team-mate, we have a lot of respect for each other and he’s a very friendly person as well so it’s good to have a good atmosphere between the drivers.

“Also the team, they are pushing and since I joined I think Daniel and I are pushing each other to the limit, we are pushing the team forward and I think that's very good for the whole combination.” 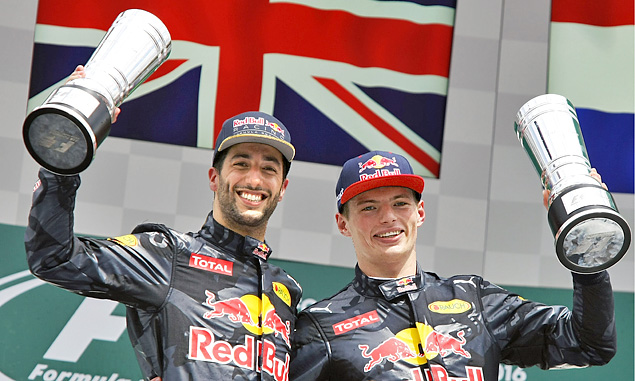 So how does an 18-year-old who has become so used to rapid success keep his expectations in check? Easy. Verstappen feels he lucked in to his Spanish Grand Prix victory and says it will take time before he can get the most out of his Red Bull.

“Of course it was a bit of luck as well but a win is a win and nobody will take that away from you. I think the most important thing is just be yourself and focus on what can be done better because in my first race I got in five times before I won my race, it’s all so new. Even the procedures were just so new to me, even doing that race I was not using the full potential of the tools I had, all those kind of things.

“So I’m still learning, I'm still improving and I don’t think it's just in terms of pace, it's everything around to get to a certain pace. It’s like getting all the little bits together to extract one more tenth or two more tenths, it's not the driving in myself because I know how to drive the car right now. From there on it’s just building experience.

“The thing is I don’t have the data from myself from last year in this team so I always have to rely on old data. With Toro Rosso when I came to the first four races I knew what I was doing, I was like ‘this I’ve experience last year’. The car is not that much different at the end of the day so you know how to work and you know which direction to go.

“Here it’s all new, they give you a direction and you have to work in that direction. When you have the experience from last year maybe you want to go in a slightly different direction, because you know how to drive the car, you know how you like the car and sometimes you have to swap a bit to another direction. But that will only get better and better. Next year whenever I come back, it is a new car but you have a bit more feeling to it and that will definitely help.” 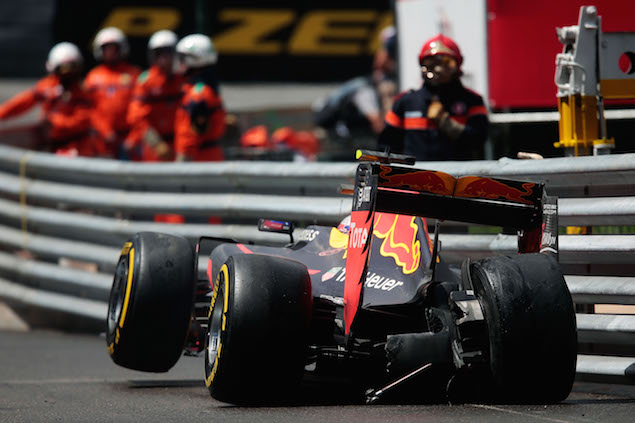 It is not his win in Spain that Verstappen highlights as the race from which he is taking the most lessons, but from the following grand prix in Monaco where he crashed out of both qualifying and the race while Ricciardo took pole and should have won.

“I think that Monaco showed, I always want to be 100% but some weekends you just can’t be 100% for whatever reason. I think in the end I came from 21st to ninth which I think was already a really good result but I’m not happy with ninth, I want to keep going forward, I want to keep driving at 100% but in Monaco you can’t be 100%.

“That caught me out, cost the team points, cost me points and of course it was not the weekend I expected after a win. But you learn from this and you shouldn’t forget I’m still only in my second season of Formula 1.

“I only did one and a half years of Formula 1 and one year of junior racing, so it’s all a steep learning curve and for sure I will get some highs and some lows still. But of course you try to minimise and I think so far at Red Bull that’s going in the right direction because I think since Monaco it has been very positive.”

Ricciardo has got the better of Verstappen in recent races - finishing second in Germany and third in Hungary - but the Dutch driver is taking confidence from how hard he is pushing the highly-rated Australian so early in his career.

“No, no big surprises but for me it’s a very steep learning curve and I don’t feel like I’m at the limit of my potential yet. I’m 18 years old, and I can also see from my career in go-karting, from where I started in my first season to the last season, how much you improve just from having experience which can give you a much better result is massive. I think that will keep progressing and it will keep making me better. 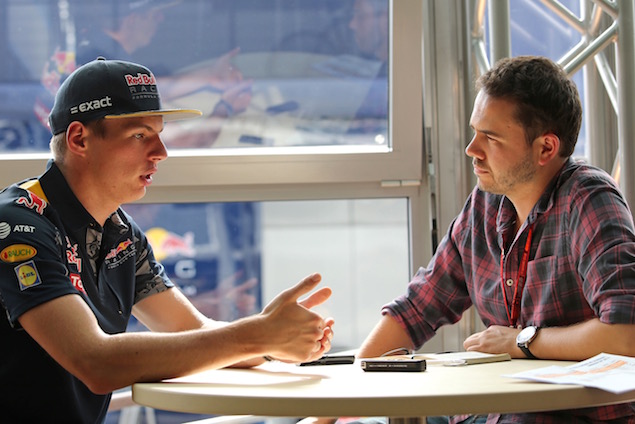 “I think already compared to last year in the way I approach races and stuff, it’s a big step forward. At the beginning of this season as well with the car we had at Toro Rosso I think it was more difficult than last year with all the teams around us, so to still achieve some good qualifying results and even race results I think I improved a lot as a driver.”

Some pundits claim F1 is too easy if a teenager can jump in a car and be immediately competitive, but while Verstappen admits he has even surprised himself at how well his career has gone so far he says such comments underestimate how hard he has worked to get to where he is.

“That’s always very different to expect to be honest. Of course you have certain expectations here and there, you think it’s always very hard. It’s the same when I arrived in Hockenheim in 2014 and I was watching the cars and I was like ‘oh my god, how am I going to drive those cars?!’, but once you jump in it your natural feeling takes the better of you and you know how to drive it.

“But of course if you’re watching the car and they brake so late you’re like ‘oh my god, how are they doing that?!’, and then once you’re in the car of course you build up to it. At one point you’re able to do it and it maybe seemed easy but it’s also hard work and stress.

“It seems easier than it actually is because I am still working hard for everything to achieve those things and sometimes I surprise myself which is good. Hopefully we can continue that way.” 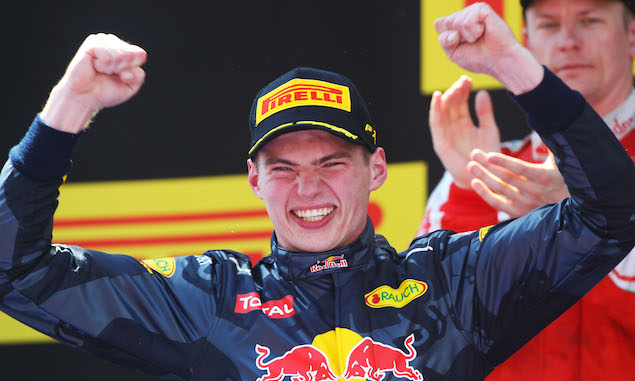 So after so much success already and with the opportunity to spend years in a top team ahead of him, does the rising star feel he is destined to become a Formula 1 World Champion one day?

“That’s definitely my goal, but it’s always difficult to say ‘OK, here in this team I’m preparing to become world champion’. You never know, you need a bit of luck as well to have the right material at the right time.

“Look at Fernando Alonso, I think he could have been seven-time world champion because he’s very quick but he’s been in the wrong place at the wrong time. So it’s difficult, but hopefully we can do it in this team because I’m feeling very happy here.