Mindful of Formula One’s relentless development pace, teams used the 2016 season finale in Abu Dhabi to further their preparations ahead of next year’s radical regulation changes. Nicolas Carpentiers provides you with images and explanations of the technical concepts spotted and sampled at Yas Marina Circuit. 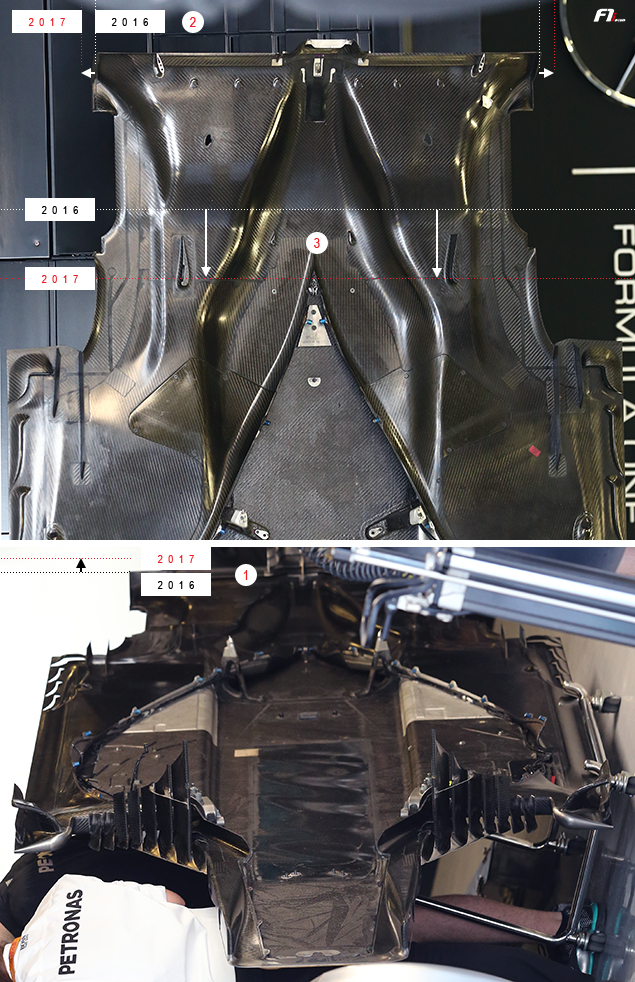 Last weekend’s Abu Dhabi Grand Prix offered a final chance to see the 2016-spec Formula One cars and their diffusers in action, bearing in mind the latter elements will increase in volume next year. Pictured above is the diffuser of the Mercedes W07 Nico Rosberg drove to the title on Sunday evening.

Basically, the diffuser serves to accelerate the velocity of the air flowing underneath the car. Working in conjunction with the rear wing, the diffuser ‘pumps’ the air from the undertray with a suction peak occurring in the area where the underbody and diffuser meet.

Next year, the undertray will be 200mm wider, but the splitter will be pushed back 100mm; the overall length of the underbody will depend on the wheelbase each team decides to go for. As for the diffuser itself, it will be raised by 50mm, sitting 175mm above the reference plane instead of 125mm (see ‘1’ on the image above); it will increase in width, from 1000mm to 1050mm (see ‘2’); and it will also be longer since it can start 175mm forward of the rear wheel centre line (see ‘3’).

As a result, the diffuser’s volume will surge around 120%, from 21875cm3 to 48235cm3. This expansion will increase the vacuum produced underneath the car, even more with the greater interaction between the rear wing – lowered by 150mm – and the diffuser. Bringing the latter element forward will also have a similar effect on where the suction peak occurs, which will help even out the aero load on the car. All these factors will enhance downforce, though the increased wake of the wider tyres will affect how the undertray and diffuser work.