The Chinese Grand Prix might have been only the second race of the 2017 season, but several teams took the opportunity to introduce a series of technical novelties that caught the eye of F1i's Nicolas Carpentiers.

Last weekend at Shanghai International Circuit saw McLaren trial its own version of the trending ‘T’ wing, thus following into the footsteps of Williams, Ferrari, Mercedes, Haas, and Sauber.

This year’s technical regulations have mandated a lowered rear wing, with the element now sitting 150mm lower and in an area where it is more exposed to dirty air. Indeed, flows on both sides of the engine cover meet at the back of it and create turbulence.

Hence the return of the shark fin first seen in 2008-10, which helps ‘straighten’ the two streams before these merge into a flow that is more laminar. Fed with cleaner air, the lower rear wing can produce more downforce.

With so many creative minds in the Formula 1 paddock, it did not take long before they took advantage of a loophole they found upon looking closely at the new regulations. According to renowned F1 expert Craig Scarborough, a mistake in updating the text inadvertently left a 5cm-long zone where 2016-spec bodywork could be placed, between the shark fin and rear wing. And right on cue, the maximum height and width of the ‘T’ wing pretty much match the dimensions of last year’s rear wing. 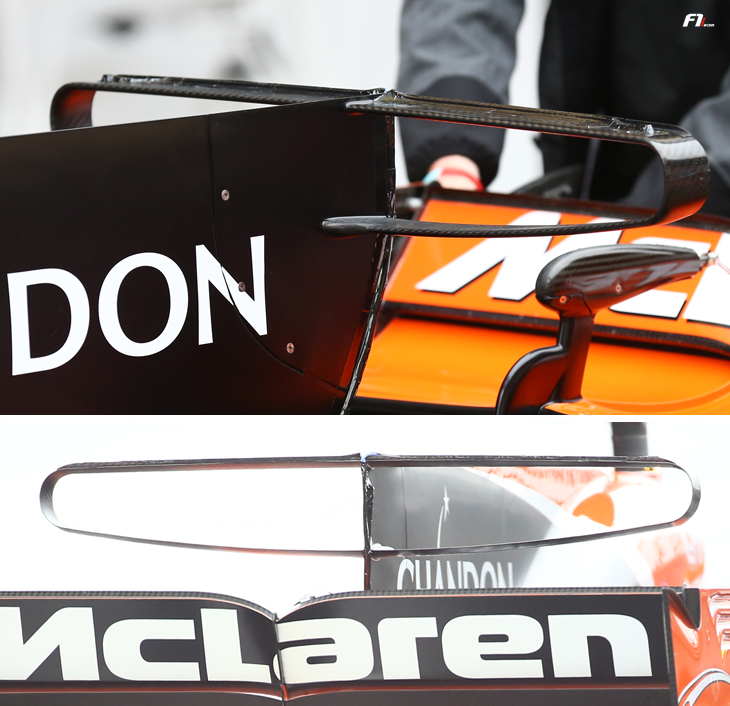 The ‘T’ wing is an element that creates aerodynamic load, which is transmitted to the car through the shark fin (or rear wing pillar for the Mercedes W08). However, the ‘T’ wing also generates drag, which could explain why Red Bull elected against running the component, given that the driving force behind the RB13’s design has been to curb drag as much as possible.

How exactly the ‘T’ and rear wings interact remains educated guesswork. On one side, the airflow deflection inflicted by the ‘T’ wing would slightly disrupt the functioning of the rear wing, though gains made in terms of downforce would be sufficient to offset the negatives. Another theory would be that the ‘T’ wing serves to actually increase the effect of the rear wing. 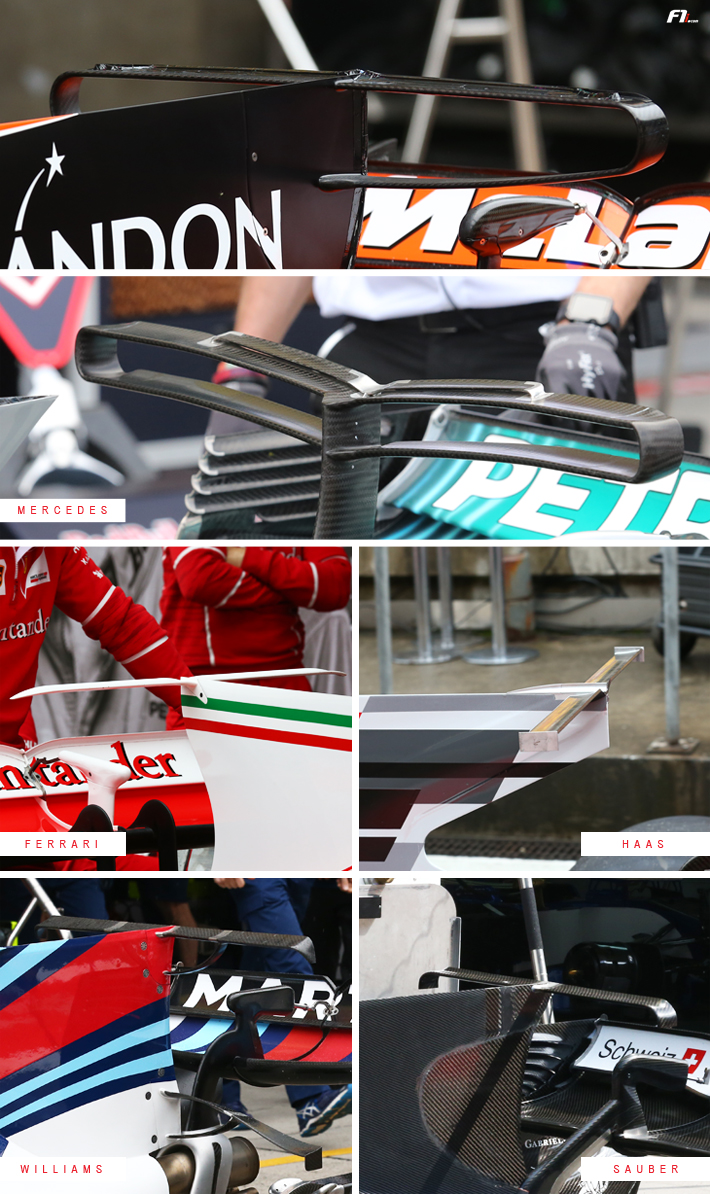 McLaren’s design reminds of Mercedes’ concept: a ‘T’ wing with two planes that connect thanks to a rounded element. Contrariwise, Williams, Ferrari, Haas and Sauber all have single-plane ‘T’ wings. The rounded part on the edges would help limit vortices and curb drag.

Despite a growing popularity among teams, the element has come under greater scrutiny from the FIA, especially when it comes to the wing’s high flexibility, which would make it fragile (Valtteri Bottas’ ‘T’ wing broke in practice, while Haas had to strengthen its design to make it sturdier following a request from FIA race director Charlie Whiting).

It is believed that F1’s governing body is seeking to implement mandatory flexing restrictions by next month’s Spanish Grand Prix.

From F1 to Indy: a crossover of diverse fortunes