Felipe Nasr could be excused for feeling a bit resentful for not being on the F1 grid this year, but a contemptuous tweet directed at one of his former colleagues is definitely out of line.

Responding to a message from Renault which underlined the merits of both Nico Hulkenberg racing into the points on Sunday, the usually pleasant Nasr took the opportunity to question Jolyon Palmer's presence in the French team, in a very ungracious way to say the least. 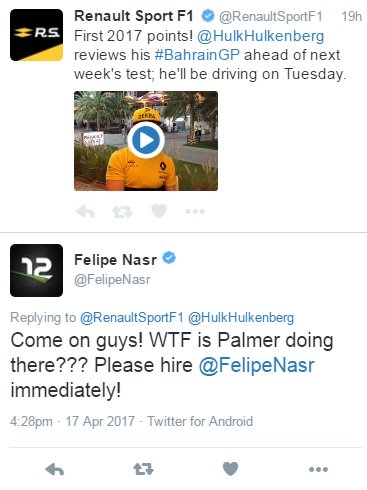 The tweet was immediately deleted, suggesting that Nasr's account had likely been hacked or wrongly accessed, something the Brazilian later confirmed.

Unfortunately, the foul-up had already been picked up on social media which typically stirred and spun the disdainful jab.

Still, many will recall that Nasr and Palmer are not the best of friends. Their bitter rivalry started as they battled for supremacy in GP2 in 2015 and wandered into Formula 1, with things coming to a painful head at the 2016 Italian Grand Prix when the two drivers collided.

It's doubtful Nasr and Palmer will ever share a holiday together.

GALLERY: All the action from the Bahrain Grand Prix