Vettel's morning best of 1:17.124s on supersofts remained unbeaten in the afternoon heat. However, McLaren's Lando Norris did improve on his already impressive early time as the day went on. Switching to ultrasofts saw him finish just 0.261s off the four-time world champion's pace.

Norris completed 91 laps during his day in the car. That compared to just 40 for Vettel, who handed over the SF70H to Kimi Raikkonen at midday. The Finn went on to post 60 laps over the remainder of the test and was third fastest overall.

However all eyes were on Robert Kubica. The Polish driver was back in a current Formula 1 car for the first time in almost seven years. He completed 74 laps in the morning and a further 68 in the afternoon, ending the day with the fourth fastest time.

Kubica's lap of 1:18.572s was on ultrasofts. It was almost two seconds faster than Nicholas Latifi had managed in the same car on Tuesday. He finished the test ahead of both two Toro Rosso drivers Carlos Sainz and Daniil Kvyat on the timesheets.

Lucas Auer won the day's internal battle of prospective Force India drivers, four tenths faster than Nikita Mazepin. Mercedes' George Russell was between them in eighth on the timing screens, having spent some of his day testing a new version of the Halo protection device.

Pierre Gasly put in a solid day's work with 107 laps for Red Bull. However it was Williams' Luca Ghiotto who put in the longest hours on Wednesday, completing a total of 161 circuits of the Hungaroring. Santino Ferrucci also hit triple digits but was only 12th fastest for the day in the Haas. He ended the day a second faster than Sauber's Nobuharu Matsushita.

The first was for Danil Kvyat, who had taken over from Carlos Sainz at Toro Rosso after lunch. The Russian completed 54 laps and was sixth fastest for the day, having set his fastest lap before stopping on track with 28 minutes left on the clock.

There was a brief second red flag for debris on track before the track went green again with 15 minutes remaining. However that was cut short when George Russell stopped out on track in his Mercedes, and the session did not restart. 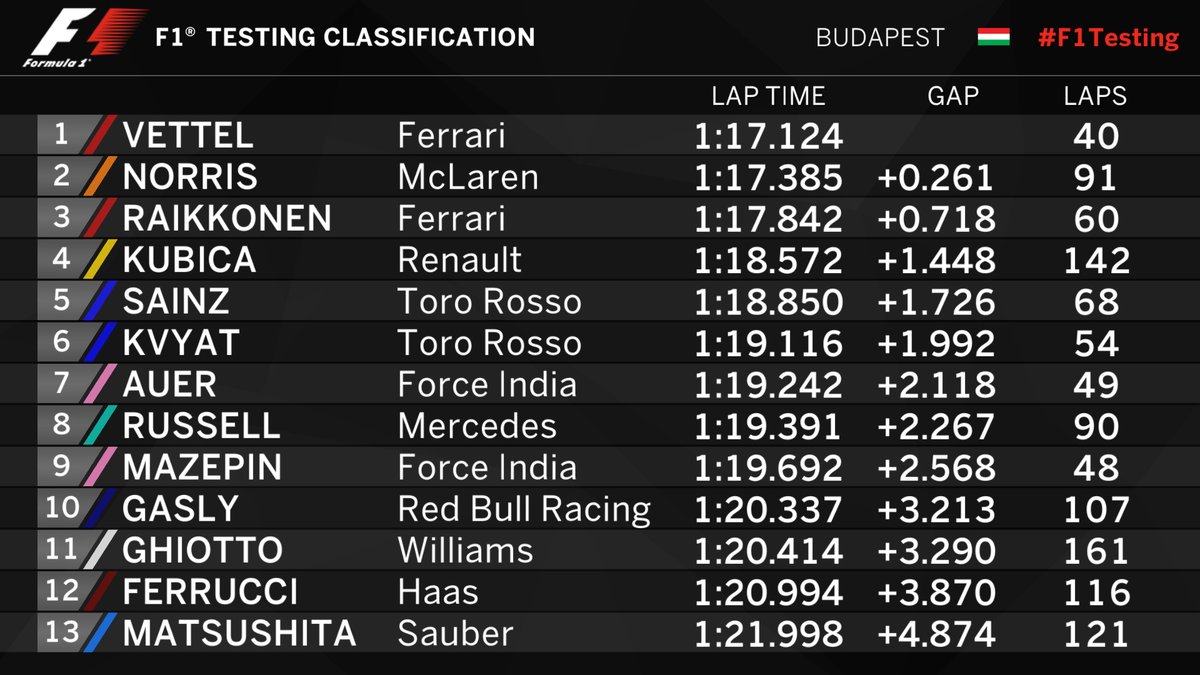 F1i Poll: Should Kubica replace Palmer after the summer break at Renault?