McLaren's technical director Tim Goss says he believes that the team has made major progress adapting its chassis to the demands of a completely new engine architecture.

The late confirmation of the decision left the team working hard over the winter. Many changes to the car were needed to accommodate the replacement Renault power unit.

"We were fortunate that the decision to move from one engine to another was made just in time. It couldn't have been made any later," Goss told Motorsport.com.

"We had to reconfigure the chassis," he confirmed. "But we've managed that in time without any significant compromise to the chassis. It was quite a big change.

"The Renault architecture is very different," Goss admitted. "The Renault engine will sit further forward in the chassis.

"With the Honda you had the air intake that had to come down into the front of the engine," he explained. "That volume came out of your fuel cell, so as a result the chassis was longer.

"When you move to a Renault, suddenly the front of the engine becomes a lot simpler," he said. "As the result we win back a substantial amount of fuel volume.

"Obviously you choose the architecture of the car at the beginning of the season," he noted. "There are some things that are built in that you cannot really change during the season.

"When you redesign the car, that is your opportunity to make those changes," he said, adding that he was delighted by the result so far. "We've done a fantastic job. A really fantastic job."

McLaren will pull the wraps off its new car on February 23, just a few days before pre-season testing kicks off in Barcelona.

Rosberg: It couldn't have got any better than beating Lewis!

Sirotkin's father: 'Sergey stronger than Kubica in all areas' 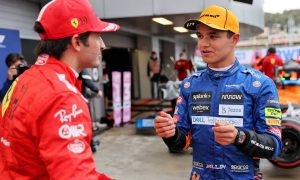