When he's out on the race track, be it at the wheel of a luxurious sports car, Lewis Hamilton doesn't often let someone else do the driving.

As Tommy Hilfiger's new Global Ambassador however, the four-time world champion was more than happy to let American model and designer Gigi Hadid work the wheel before giving his fellow Hilfiger fashion force a sample of his speed and style.

Hamilton has teamed up with the clothing giant following the company's recent sponsorship deal with Mercedes. The F1 superstar will promote the Tommy Hilfiger brand through its various lines and range of menswear.

To celebrate the stylish and voguish association, the clothing company brought Hamilton and Hadid together for an exciting day at the race track.

Check out the video below of the two icons' fast and furious antics.

Senna's Monaco Toleman to go under the hammer! 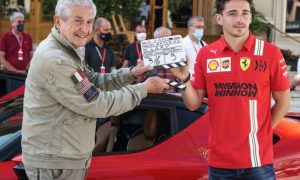