Max Verstappen said that an unexpected power surge was the cause behind his spin into the safety barriers during qualifying for the Bahrain Grand Prix.

Verstappen had just set set the fourth fastest time in the first round of qualifying when the accident happened. It meant that he wasn't able to take part in Q2, and at best will now start from 15th place on the grid.

"It was unfortunate,” Verstappen said afterwards. ”I studied the data a bit and suddenly we had a 150 horsepower increase, which is a bit odd.

"The corner is not flat out, you're just feathering the throttle.

"But it was like an off and on switch. You've got 150hp and then less and then again 150. And then suddenly it spun up the rear tyres quite aggressively, and I spun.

"I didn't anticipate it at all. With 150hp extra, suddenly it went and when you are already on the limit it is quite a lot."

The wreck left his car with a damaged front left suspension. The car was craned away while qualifying was paused under a red flag. The team was assessing the car's condition and starting work on repairs.

"The damage is fairly superficial," Red Bull team principal Christian Horner told Sky Sports F1 "It's not damaged the chassis at all. It's just annoying that it happened in that part of qualifying.

"We don't think we'll have to take a grid penalty, so we'll see."

Horner himself was unable to confirm the cause of the accident. Based on what he'd seen on the video footage, he was assuming it had been down to driver error.

"I haven't actually spoken to him in person yet," he said immediately after qualifying. "Basically we were doing another lap to get the engine to learn a little bit more in order to optimise its settings.

"Unfortunately the rears just got away from him. You can see it through turn 2, got on the kerb there," he sighed. "It's a mistake, and he will have to bounce back from it.

"It is just racing," Horner added. "At that point in qualie, that lap was never going to be a quicker lap.

"He looked quick this morning as well, so it's an opportunity lost today. But he's going to have to get his head down tomorrow and race hard - which we know he can do. And this track you can overtake at."

Bahrain is certainly a much better circuit for overtaking on than Melbourne's Albert Park Circuit. Verstappen was certainly hoping to make the most of the opportunities available to him on race day.

"But we'll see. A little bit of luck with the safety car, that would be good!"

Vettel delighted to come out on top in 'intense' qualifying 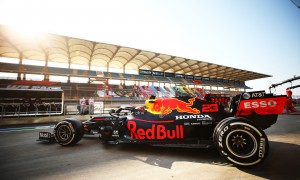