The British driver put himself at the top of the timesheet with a lap in 1m32.231s achieved on Pirelli's ultrasoft tyre, edging out team mate Valtteri Bottas by 0.140s and Red Bull's Daniel Ricciardo by 0.296s.

When the lights turned green, and marked the official start of the first F1 race at Paul Ricard since 1990, Pierre Gasly became the first Frenchman of his generation to take part in the French Grand Prix.

It was Valtteri Bottas however who put the first time on board, the Finn laying down a reference lap of 1m36.849s.

Mercedes confirmed before the start of FP1 that both works cars, as well as Force India and Williams, have received a new ICE, turbo and MGU-H. However, the German manufacturer cleverly omitted to reveal the specification of the new units!

The first mishap of the session came from Brendon Hartley who looped his Toro Rosso at Turn 6. He wasn't the only driver however to be caught out by the wind at that specific location, with Stoffel Vandoorne spinning his McLaren at the same spot, followed by Ferrari's Kimi Raikkonen.

Thirty minutes into the session, a soft-shod Daniel Ricciardo jumped to the front, was briefly topped by Bottas before banging in a 1m32.576 that put him back in charge.

Meanwhile, grinding around fairly unnoticed, Lewis Hamilton pulled himself up to P4 using the ultrasoft tyre as the session reached the half-way mark, albeit 1.465s adrift from Ricciardo.

Both Bottas and Raikkonen improved on their early flyers, the getting within 0.030s of the Aussie's pace setting time.

The relentless Bottas, running on the ultrasoft, succeeded in edging ahead of Ricciardo, by just 0.010s, but was almost immediately knocked off the top spot by Hamilton, who finally got his act together as he pushed on the ultrasoft rubber, clocking in with a 1m32.273s.

Meanwhile, Gasly was reported to the stewards for staying out 2m43s longer on his first set of tyres than is permitted under the rules - drivers having to hand back their first set after a maximum of forty minutes. The breach will likely result in a $10,000 fine for Toro Rosso. 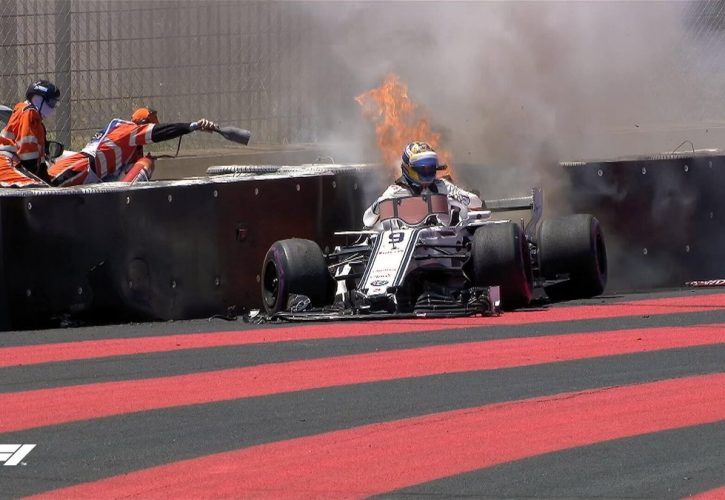 Hamilton, Bottas, Ricciardo, Raikkonen and Vettel concluded the session in the first five spots, while Haas' Grosjean was sixth. As usual in free practice, Ferrari adopted a relatively low profile in FP1, the Scuderia working diligently while perhaps masking its true pace.

It was a rather laborious morning run for seventh-place man Max Verstappen, the Red Bull driver complaining of a general lack of grip as he ended the morning 1.1s off the overall pace.

Unfortunately, the final minutes of the session were marked by a big crash for Marcus Ericsson, the Swede suddenly losing the rear-end of his Sauber upon the entry to Turn 11 at Beausset, located right after the fast Signes corner.

The impact was a big one for the driver and Ericsson was fortunate to walk away from the crash, especially as the rear of the car immediately caught fire following the impact, something which in itself will lead to a big rebuild for the Sauber crew before FP2.

Bottas puts his money on Ferrari in France