Valtteri Bottas put his name at the top of the timesheet in FP3 in what turned out to be a very wet dress-rehearsal before this afternoon's qualifying session.

The Finn, and the drivers he preceded, never managed more than five laps in the disrupted session, leaving everyone with more questions than answers before this afternoon's battle.

Southern France's sunny weather gave way to covered skies and the threat of rain, enticing everyone to make a run for it early on in the session.

Several drivers actually reported a few rain drops on the visor from the outset, but that didn't keep Valtteri Bottas from setting an initial benchmark time of 1m33.666s - ahead of Sainz, Leclerc and Alonso.

Five minutes into the session however, the track started to dampen, and drivers exerted caution. After 15 minutes, a thoroughly soaked surface brought everyone back in and in waiting mode.

Seven minutes from the end of the session, McLaren fired up Alonso's McLaren who headed out for a few exploratory laps, along with Williams' Sergey Sirotkin and Lance Stroll, likely just to get a feel for things in case the afternoon's qualifying is also impacted by rain.

Leclerc, Vandoorne, Gasly and Hartley also briefly ventured out, but all were cautioned by their team to avoid taking any risks. 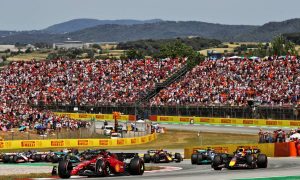