Despite splitting up its Mistral straight with a much criticized chicane, Paul Ricard offers levels of top speed that will likely be among the highest of the season.

As usual, a Force India was found among the fastest runners in a straight line in qualifying, with Sergio Perez passing through the speed trap at 337.5 km/h.

One will note the presence near the top of Sergey Sirotkin's Williams, a car obviously running very low levels of downforce but which haven't helped it's cause overall, the Russian driver lining up this afternoon at the tail end of the grid along with team mate Lance Stroll.

Charles Leclerc's impressive P8 performance on Saturday was helped by the grunt of his Ferrari engine and a healthy dose of straight-line speed, while at the opposite end of the readings, a depressed McLaren duo unsurprisingly makes up the rear, with Stoffel Vandoorne a whopping 16 km/h off the top speed. 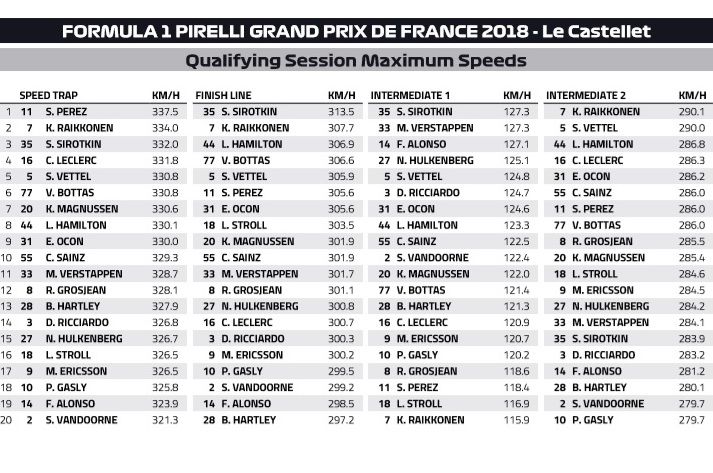 Ocon hoping for race conditions that 'can mix things up'

Paul Ricard traffic chaos will be addressed by Formula 1 - Brawn