The pressure is ramping up at Mercedes after Lewis Hamilton lost out to Ferrari's Sebastian Vettel, the Briton's race determined in large part by his first lap contact with Kimi Raikkonen.

The Finn locked up as the pair entered Village, sending the Mercedes into a spin and dropping Hamilton to last in the field.

It was an impressive recovery driver for Hamilton thereafter, but the result still left a bitter taste in the Mercedes camp.

"An amazing recovery from Lewis, he was dead last, and ending P2 was the maximum damage limitation we could have achieved, a fantastic drive from him," Wolff told Sky F1's Ted Kravitz.

"In [Mercedes technical director] James Allison's words, we think it's deliberate or incompetence, so this leaves us with the judgment."

As he was interviewed on the podium by Sky F1's Martin Brundle, a disappointed Hamilton hinted himself at foul play by Ferrari and Raikkonen.

"As a team we did an amazing job this weekend, we got just so much support and so much pressure obviously for us all," Hamilton first said before adding, "Interesting tactics I would say from there side, but we will do all we can to fight them, and improve in the next races."

In the post-race interview, Raikkonen immediately recognized and owned up to his opening lap mistake involving Hamilton.

"Hitting Lewis in the rear - my bad... my mistake," conceded the Finn.

"I deserved the penalty, I took the 10 seconds. Without the mistake it would have been better. I tried. I did the best I could."

The Finn was also handed two penalty points on his superlicense by the British Grand Prix Stewards for his botched maneuver.

Vettel wins as Hamilton charges back to second place 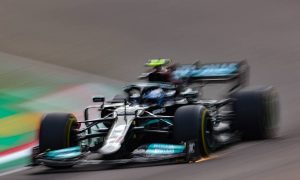