Max Verstappen was still fuming on Sunday evening after being forced to retire just five laps into the Hungarian Grand Prix by yet another engine-related failure.

“Today didn’t go the way we planned," the Red Bull driver said. "The race was then over within six laps.

"It is really frustrating after putting all the effort in and being in a promising position, but then having to stop due to reliability."

It's the eighth time that the team's TAG Heuer-branded Renault power units have let Verstappen and his team mate Daniel Ricciardo down in 2018.

"I think from both sides, Danny and me - honestly, it's just at all now how it should be," he told reporters after the race.

"You pay millions as a team for what you hope is a decent engine, but it keeps breaking down," he complained.

"We're also the slowest out there," he added. "It's honestly difficult at the moment to accept."

Verstappen certainly hadn't held back, turning the air blue with a tirade of four-letter words over the team radio as he was forced to park the stricken RB14 by the track side.

"I was very angry over the radio," he admitted. "I think there was a lot of beeping out there! It's a shame they beeped it away, it would have been better if they had allowed it. But that's how it is."

As far as the fans in the grandstands were concerned, Verstappen was once again the star of the show. The Dutch driver said he was most upset by not being able to put on a decent show for them today.

While Ricciardo went on to successfully battle his way from 12th on the grid to fourth place in the race, Verstappen was left ruing would might have been at the Hungaroring.

"I was like 25 seconds ahead [of Ricciardo] because of the starting position I was in," Verstappen agreed. "As I was happy with the car I think we could have had a good battle with the front group. It’s a shame to have missed out on that.

"It's always difficult to say afterwards. At the end of the day we could have been easily fifth if nothing had happened let's say at the front. 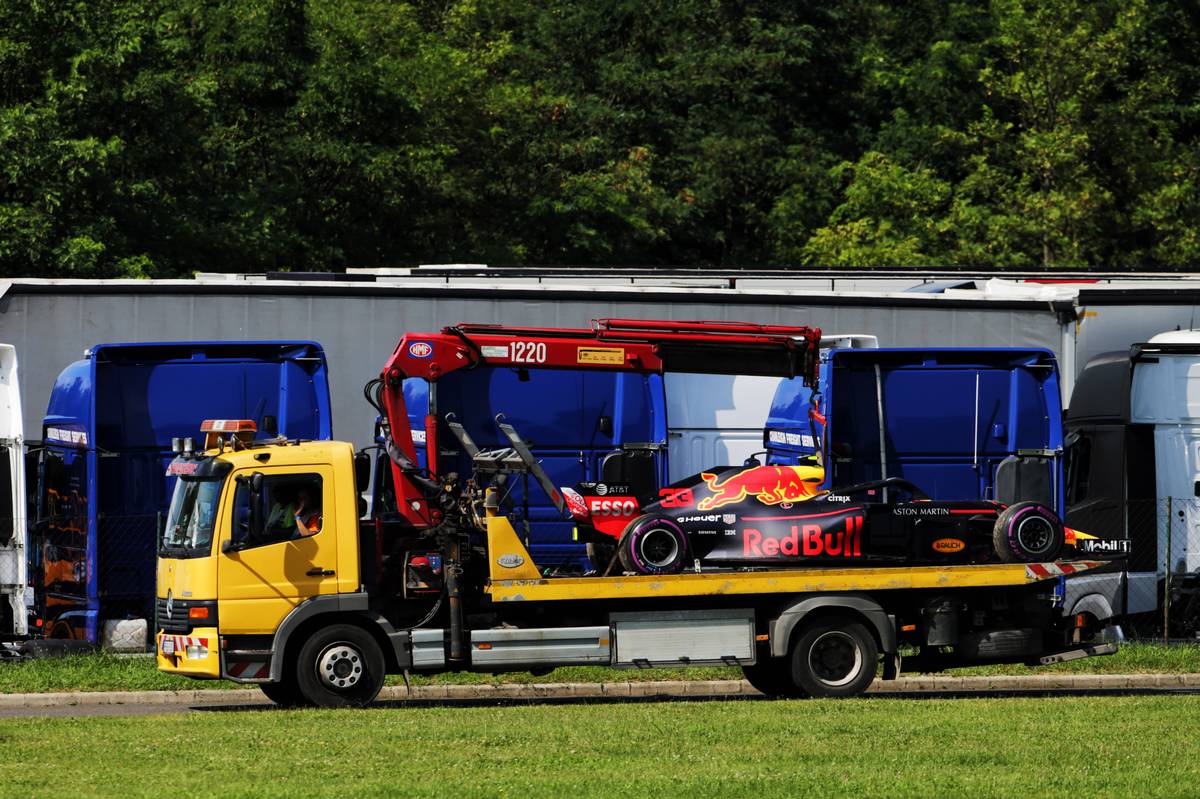 As well as the cost of Sunday's retirement, Verstappen also faces possible grid penalties for the next race

"Let's see what we have to do in Spa. If we have to take penalties or not I don't know yet. At the moment, I also don't really care."

Before Spa there's a month-long summer shutdown for the sport to allow the teams and drivers to recharge after a gruelling couple of months. But even that prospect didn't find much favour with Verstappen.

"I hate it when people say that - bad luck, and no enjoy your holiday!" he admitted. "For sure the first week I'm not really enjoying it because of the end of the last race.

"I don’t really feel like going away on holiday now as this isn’t the way I wanted to finish the first part of the season. I would like to get back in the car to race again and finish on a strong result. Unfortunately I can’t.”

"I don't feel like I'm in a holiday mood," he added. "Especially now."