Romain Grosjean is hoping that Haas will be able to quickly bounce back after its Singapore slump last week.

Despite starting from eight place, Grosjean ended up finishing the most recent race out of the points in 15th. His team mate Kevin Magnussen had an even more wretched time of it in the humid conditions.

"The problem in Singapore was qualifying in the top ten with the hypersoft," suggested Grosjean. "It didn’t last very long in the race compared to the ultrasoft and the softs.

"It made the strategy very complicated.

"In Sochi, we’ll need to see how the hypersoft performs. It’s a really good tyre on one lap, but what’s the tyre life? We’ll need to decide if we want to go through to Q3 in qualifying, or if there’s anything we should do differently.

"You don’t want to be qualifying in the top ten and then not have a chance to score points in the race," he pointed out.

Despite missing out on points in Singapore, Grosjean still felt that the VF-18 had been looking strong over the course of the race weekend.

"I think we had good pace," he insisted. "I think the car worked very well, which is very encouraging after a difficult Monaco. Sochi should be a good track for us.

"It’s key to get the tyres to work in Russia, and that’s something we haven’t done very well in the past. I’m sure this year we’re going to be much better. I’m very much looking forward to getting there and enjoying it.

“There’s a very long straight line to start, followed by big braking into a right-hand side corner, taken in third or fourth gear.

“I do quite like the fast turn three. It’s a very high-speed corner, flat out, then just going into turn four, coming out of the corner, then braking straight away for turn four.

"The next few corners are very similar. They flow nicely and you enjoy some good speed in the car.

"Then you go on the backstraight, again with very tricky braking. Then the last section of the track is much slower, in particular the last two corners.

"The finish line is straight at the last corner, so depending if you’re on a qualifying lap or a racing lap, each one is different."

The setback in Singapore means the team has lost ground to Renault in the battle for fourth place in the constructors championship. With just six races remaining in 2018, the team can't afford to have another off week in Sochi.

“It’s very exciting, very interesting," said Grosjean when asked about the team battle. ""We’re going to do everything we can to definitely get that fourth position in the constructors’ championship.

"A lot can happen. It’s very open. I think it’s going to go until the end of the year. It’s great fun."

More upgrades in store for Renault at Sochi 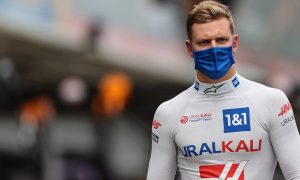