Mercedes and Ferrari are staying true to their recent tyre strategies with their choice of allocations of Pirelli compounds for the Japanese Grand Prix next month.

Ferrari has tended to be more aggressive with its selection of tyres, opting for more sets of the softest compound available than Mercedes.

That's true again at Suzuka, where all of the teams get to choose between medium, soft and supersoft tyres.

Each driver gets 13 sets of tyres in total for each race weekend. They get one set of each available compound by default, and can then choose the rest as they wish.

For Japan, Ferrari is going for ten sets of the red-walled supersofts - more than any other team on the grid.

To make up the rest of their consignment, Sebastian Vettel and Kimi Raikkonen will both take just two sets of soft tyres and the single default allocation of the mediums.

That compares to just seven sets of supersofts for their Silver Arrows counterparts. That choice allows Lewis Hamilton and Valtteri Bottas to take double the number of softs (four sets in total) and mediums (two sets) than their Ferrari counterparts.

Bottas' choice is the same as the team went for last year, although Pirelli has modified the compounds between seasons, and the tyres are considered to be one step softer in each case.

Ferrari was a lot more cautious last season and took only seven sets of supersofts to Suzuka, so requesting ten in 2018 shows how much more aggressive the team has become this year.

Elsewhere, the most popular choice seems to be eight sets of supersofts. That's the call taken by Red Bull's Daniel Ricciardo and by all the drivers at Force India, Renault, Toro Rosso, Haas and Sauber.

Ricciardo makes up the rest of his allocation with four sets of softs and just the one default set of mediums, which is also the call of Nico Hulkenberg, Brendon Hartley, Kevin Magnussen and Marcus Ericsson.

Their respective team mates go for a more even choice, with two mediums and three sets of softs each.

However, both Williams drivers have gone for nine sets of supersofts, while Max Verstappen has requested just seven.

In the Red Bull driver's case he's making out the rest of his allocation with five sets of soft tyres and just the one default set of mediums.

Only the two McLaren drivers are taking as many of the yellow-marked tyres as Verstappen.

Fernando Alonso and Stoffel Vandoorne are also taking more medium tyres than anyone else, with four sets apiece. That leaves room in their handluggage for just four sets of supersofts - far fewer than anyone else. 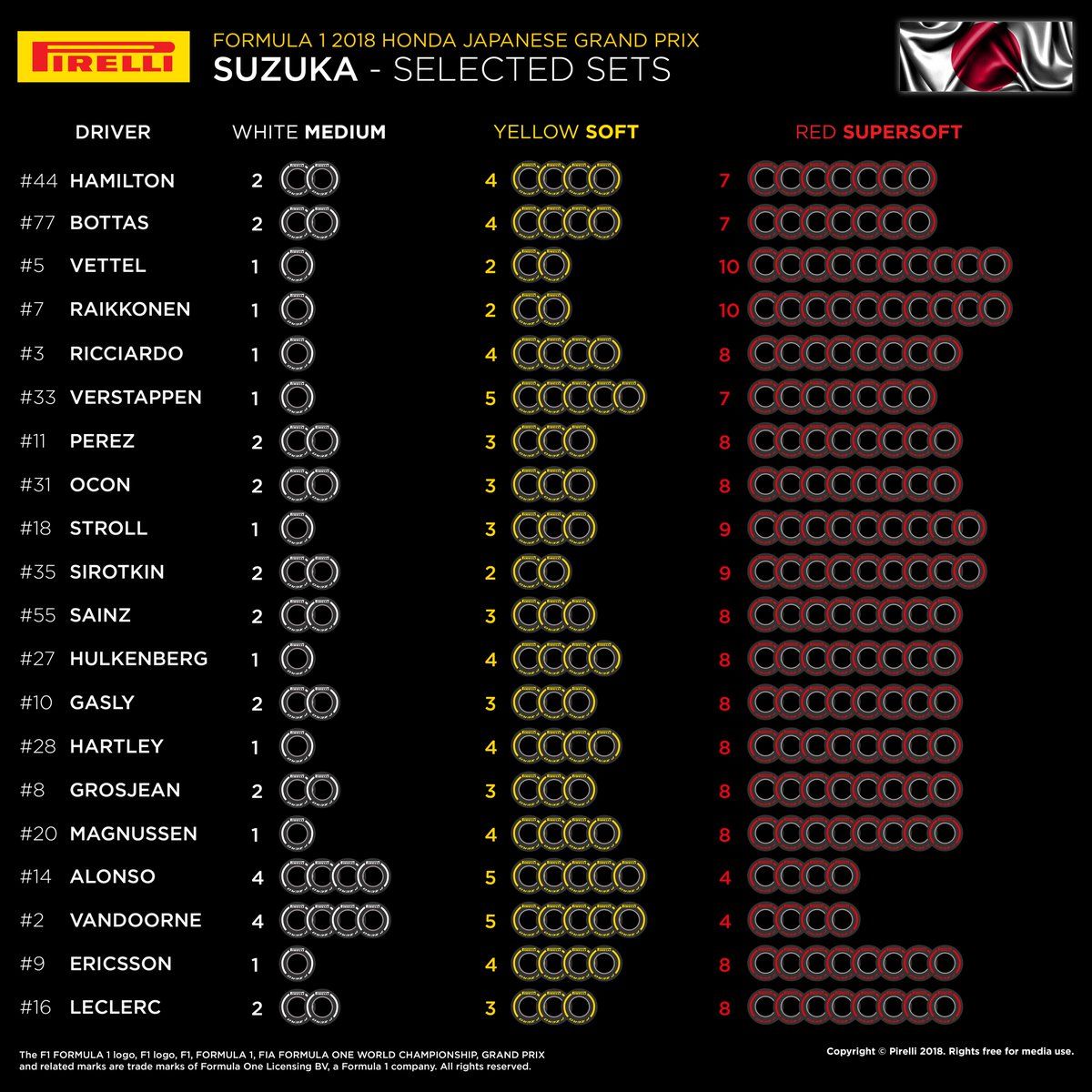 Antonio Giovinazzi confirmed at Sauber for 2019!

Ericsson to stay at Sauber in 2019 - as third driver