Lewis Hamilton's attempt to make use of an early Virtual Safety Car didn't pay off, forcing him into a two-stop strategy that left him running in third place by the chequered flag.

Already compromised by a grid penalty that saw him start the race from fifth place, Sebastian Vettel's title hopes had been further dented when he spun following contact with Daniel Ricciardo on the opening lap.

However Vettel was ultimately able to recover back to fourth ahead of Valtteri Bottas, which was enough to stop Hamilton closing out the championship and takes the fight on to Mexico next weekend. 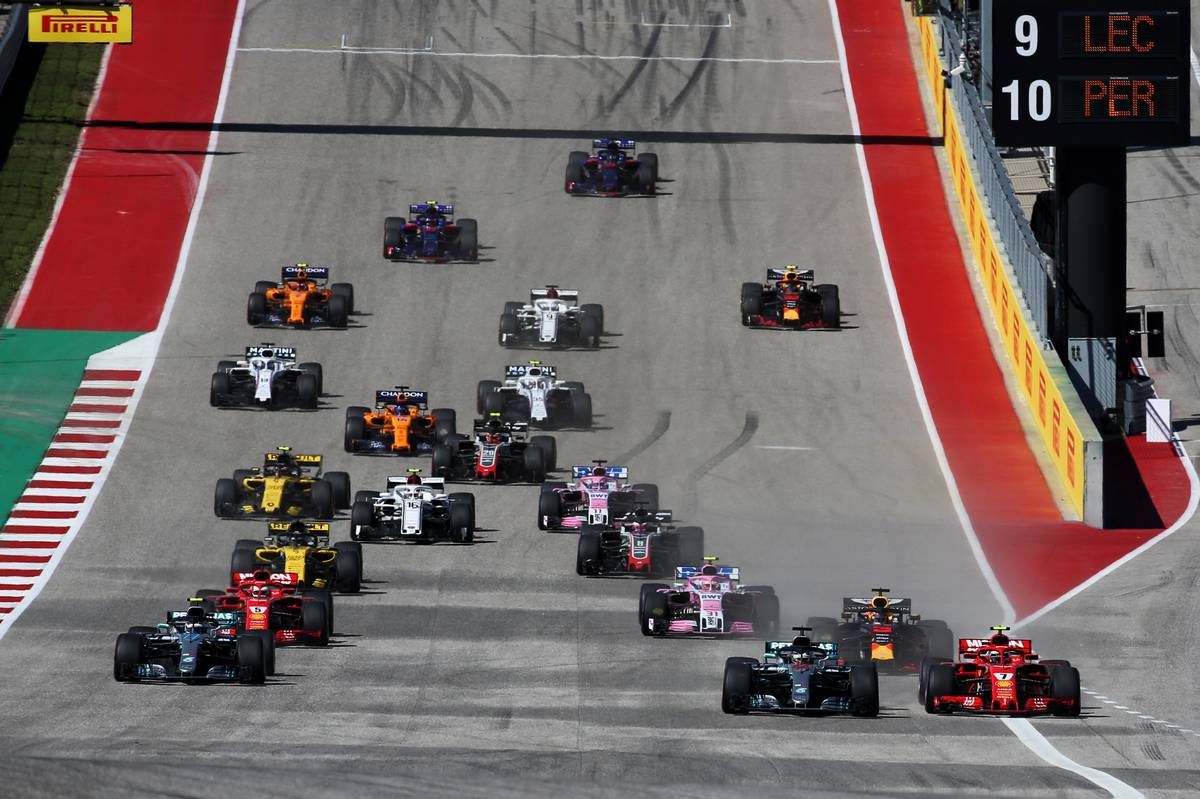 In vivid contrast to the previous two days in Austin, the race got under way under blue skies and bright sunshine, the higher temperatures giving rise to concerns about how the tyres would fare in the race given so little data was gathered in the rain-hit Friday sessions.

Pirelli had even ordered an increase in rear tyre pressures overnight as a result of concerns about degradation. In particular, there was a question mark over Kimi Raikkonen, whose Ferrari on the front row was equipped with the faster but shorter-lived ultrasoft tyres while the four cars around him on the grid were starting the race on the safer supersofts.

When the lights went out, polesitter Lewis Hamilton sought to defuse Raikkonen's tyre advantage by sweeping aggressively across the track. However it wasn't enough to prevent the Finn going into turn 1 ahead of the two Mercedes cars.

Further back, Sebastian Vettel was determined to get around the Red Bull of Daniel Ricciardo and managed to do so, only for the Australian to fight back in turn 13 resulting in contact between the pair. Vettel came off worst, spinning and dropping back to 14th place which put him 15 seconds off the leaders and his title hopes under mortal threat.

There had also been trouble further down the order in the opening laps, with McLaren's Fernando Alonso and Haas' Romain Grosjean both forced to retire with damage from separate incidents with Williams' Lance Stroll and Sauber's Charles Leclerc respectively. Stroll was subsequently handed a drive-thru penalty for causing his clash with Alonso. Renault's Carlos Sainz was also penalised with a five second penalty for gaining an advantage by exceeding track limits at the start. 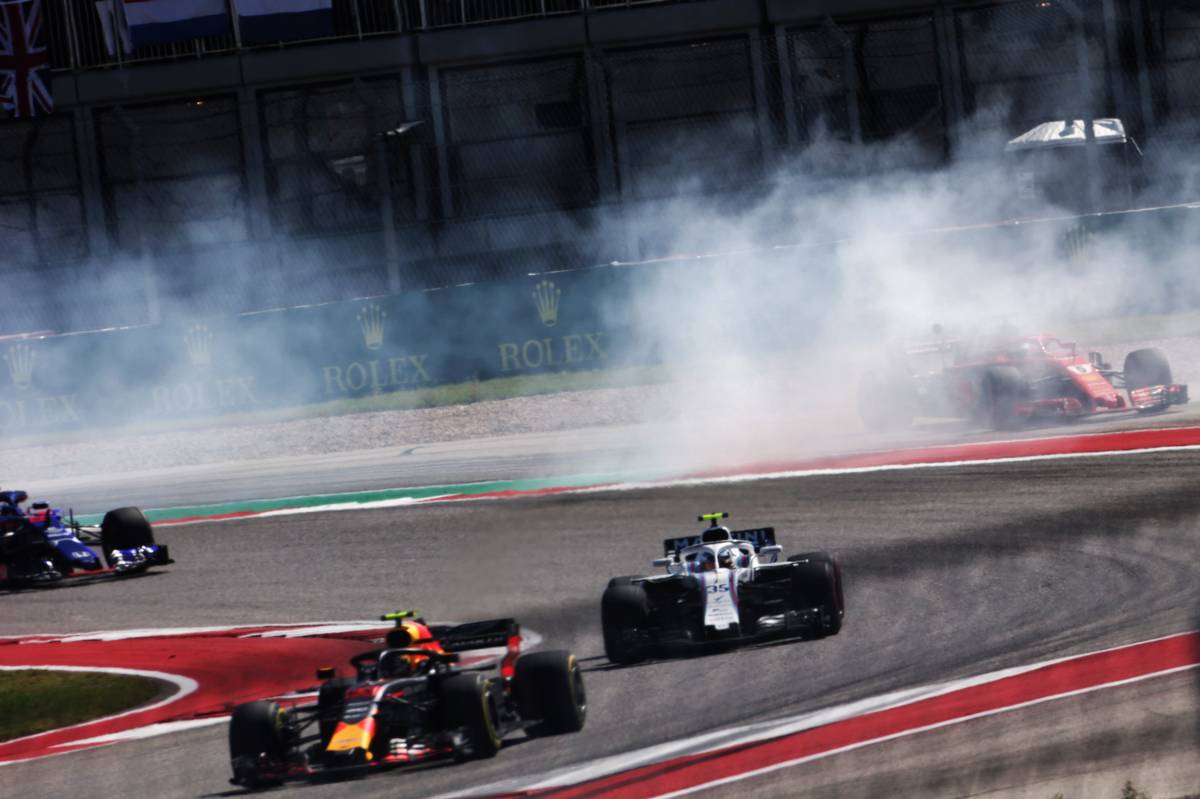 The mayhem meant that Max Verstappen had already charged his way up into the top ten, having been forced to start the race from 18th on the grid after damaging the Red Bull's suspension in qualifying and needing a new gearbox fitted overnight. Seven laps into the race and he was up to fifth having passed Renault's Nico Hulkenberg, with Vettel also in hot pursuit and up to eighth.

Meanwhile Raikkonen had settled into the lead with more than two seconds in hand over Hamilton and Valtteri Bottas, with Ricciardo having survived his first lap clash with Vettel to hold on to fifth and now in the crosshairs of his charging team mate. Hulkenberg was being shadowed by his team mate Carlos Sainz in seventh with Vettel preparing to dispatch both of them as soon as possible, while the Force Indias of Esteban Ocon and Sergio Perez rounded out the top ten.

Verstappen didn't have to worry about how to tactfully get around his team mate, because Ricciardo's car suddenly ground to a halt on lap 9 with a suspected battery issue. He was forced to pull over at the start of the back straight and climb out, leaving track workers to recover the inert RB14 under a Virtual Safety Car. The Dutch driver was soon on the radio to check whether there was any concern about his own engine, but the Red Bull pit wall reassured him that all was well.

Surprisingly, Ferrari decided not use the opportunity presented by the VSC to bring Raikkonen in for a 'free' pit stop. Mercedes immediately took the contrary approach and called Hamilton in on lap 12 for his change to soft compound tyres. As the race went back to green flag conditions, Raikkonen remained in charge while Hamilton was able to rejoin in third between Bottas and Verstappen. Vettel had taken care of business and was now in fifth ahead of Hulkenberg and Sainz, followed by Ocon and Perez with Kevin Magnussen completing the top ten in the remaining Haas. 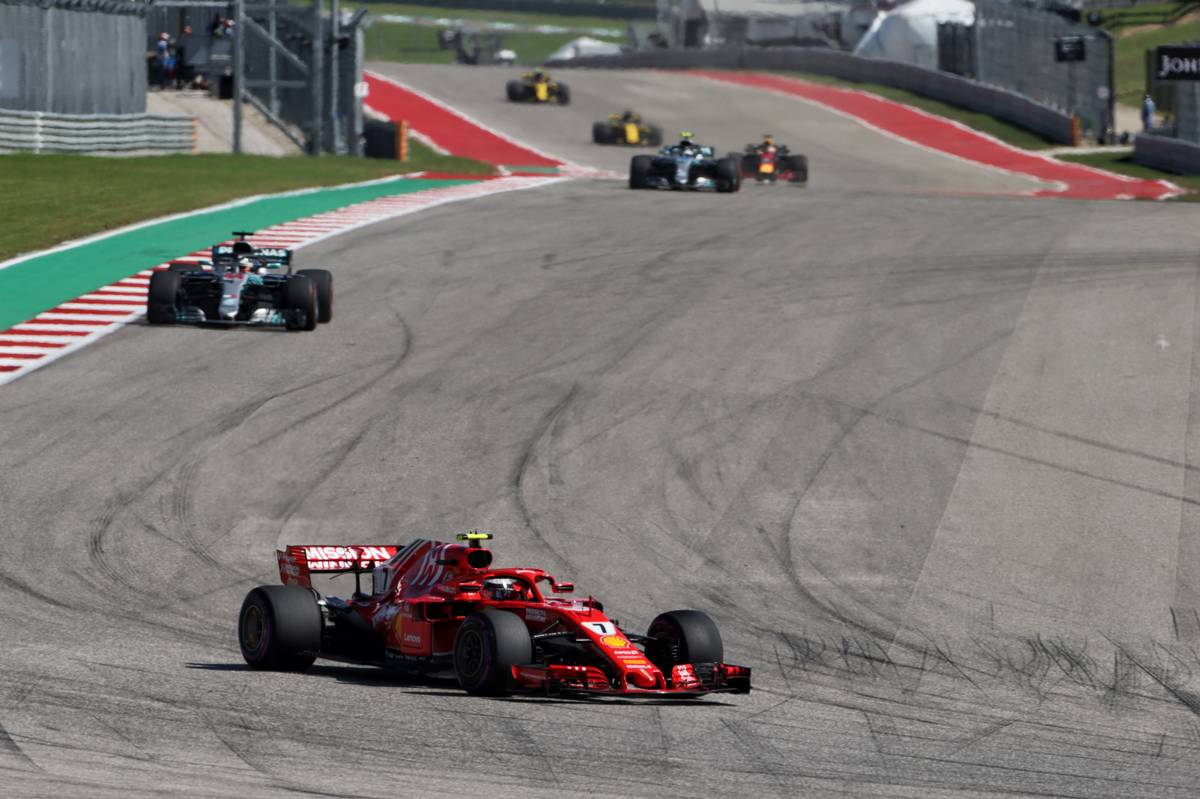 Bottas offered no opposition to his team mate as Hamilton blasted his way back up to second heading into turn 1 on lap 14. The Briton then set his crosshairs on catching the leading Ferrari, his fresh tyres giving him almost a second a lap advantage on the race leader. By lap 18 he was within DRS range and starting to harry the Finn for the position, but few can defend as well as Raikkonen. In addition Hamilton had to be wary of contact that could prove costly to his title campaign.

Raikkonen finally surrendered the lead by pitting at the end of lap 21, switching worn ultras for new softs and dropping to fifth behind Vettel. Nonetheless the Ferrari pit wall was more than happy with the way that Raikkonen had held up the Mercedes for several laps. Verstappen was next to pit, tucking back in behind Raikkonen having traded in his opening set of soft tyres for a new batch of supersofts. On lap 23 is was Bottas in for service, but the delay proved costly and he emerged in fifth place behind the Red Bull.

Hamilton now had a 17s lead over the yet-to-pit Vettel, who then had to yield second place to Raikkonen to enable the Finn to maximise his new tyres. Vettel's rears were done but he held on until the end of lap 26 before finally diving into pit lane just before half race distance. It dropped him to fifth, over 40 seconds off Hamilton.

It was soon clear that Hamilton's pace was on the wane with visible blistering on his rear tyres, even before he started to hit lapped traffic which allowed Raikkonen to take huge chunks out of the gap between them. That encouraged Vettel to get a move on as well, and suddenly Mercedes' opportunistic pit stop under the VSC was turning out to be a bad move.

Sure enough, Hamilton was forced to pit on lap 37 for a new set of softs. He came back out in fourth between Bottas and Vettel, the prospect of a race victory having fallen from his grasp but the title potentially still within reach if he was able to pick up two places and finish in second.

The first of those was a perfunctory matter, with Bottas doing everything but parking his car in turn 12 to allow Hamilton by on lap 42, leaving him eight seconds to make up on Verstappen in the remaining 16 laps available. It took him ten of those to make it within DRS range, with the Red Bull likewise hovering on the cusp of striking distance of Raikkonen making the podium order impossible to call to the very finish. 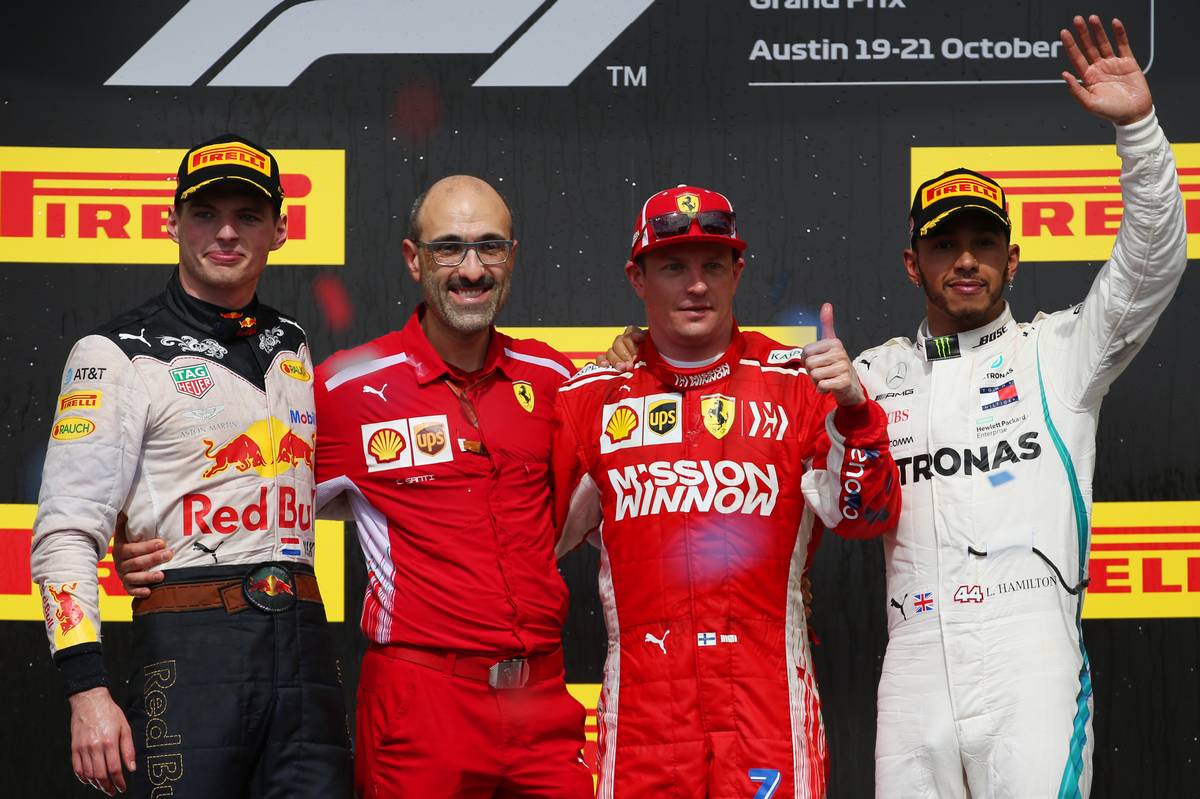 Ultimately Raikkonen clung on to claim his first win in 113 races since Australia in 2013. Verstappen held his own line and emerged triumphant in a fierce battle throughout the final laps to deny Hamilton the runners-up spot that could have secured him the 2018 drivers' title. Moments later, Vettel made that scrap academic by forcing Bottas wide in turn 1 to pick up fourth place meaning that there was no way Hamilton could seal the deal this week after all.

Behind the top five, Hulkenberg was sixth ahead of Sainz, Ocon, Magnussen and Perez. However Ocon and Magnussen were subsequently excluded from the race for technical infringements, promoting Toro Rosso's Brendon Hartley and Sauber's Marcus Ericsson into the points.

Alonso feels the need 'to rest and recover' his motivation

Vettel: 'Happy for Kimi, but it should have been a better day'