An overjoyed Daniel Riccardo delivered to Renault its first second row start since Japan in 2010 thanks to a spirited effort in qualifying for the Canadian Grand Prix.

Ricciardo comfortably sailed through the first two segments of the Saturday afternoon session to earn his spot in the top-10 shootout.

The final stint, which was delayed following Kevin Magnussen's heavy crash at the Wall of Champions, saw Ricciardo execute a pair of smooth runs that appeared to go under the radar as everyone was focused on the Ferrari-Mercedes battle ahead.

However, a glance at the timesheet revealed the fruit of the Renault driver's efforts and an end-result as "huge" as Ricciardo's trademark smile.

"I never thought I’d be so happy for a fourth place in qualifying," said the beaming Honey Badger.

"It feels like a pole position! It was so cool when they told me over the radio I was fourth.

"I’m really happy for the team today. This track is fun, I’ve always enjoyed it here. We seemed quick from the start of the day.

"Even yesterday we were fast, but we made further improvements and managed to put it all together for qualifying. 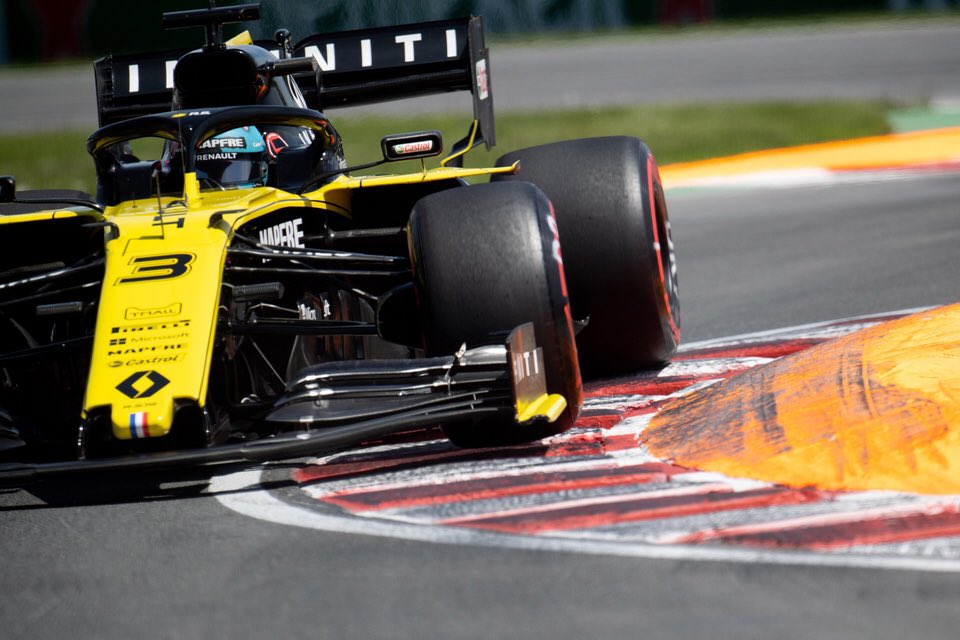 Ricciardo's outstanding performance won't change the fact that he's likely to have his work cut out for him at the outset on Sunday as both Valtteri Bottas and Max Verstappen will be starting out of position.

"We’ll see about tomorrow, the start could be interesting. For now, we’ll enjoy this moment as a fourth in qualifying is huge for us.

"I'm pretty confident we'll be OK tomorrow. The group we're in, it's hard to say obviously, I'm surrounded by a few quicker cars, but on the soft tyre, maybe we could be in the top three in the start if the cars in front start on the mediums.

"You never know what's going to happen. I think once the pace settles, the top teams will probably stretch it out a little bit, but we'll try and remain inside the top four, top five, and get some points that we maybe missed out on in Monaco."

Renault's day was completed by Nico Hulkenberg qualifying P7. The German was satisfied with his result but also very happy for his team mate.

"Daniel pulled out a great lap and the overall team result today is excellent," said the Hulk.

"The team has worked really hard – especially on the power unit - which has made a big step from last year.

"We, quite clearly, confirmed that progress today. Our race pace has looked good recently, so hopefully a strong result is on the cards tomorrow."

Bottas 'lucky' to come out of Q3 spin without damage