One would expect that a visit to a proper power circuit like Silverstone would showcase the mighty muscle of Ferrari's engine, as has often been the case this season where maximum power is unleashed.

Instead, Maranello's prancing cavallino was supplanted by a stallion of French origin, mounted by cavaliers Daniel Ricciardo and Nico Hulkenberg.

The Renault pair outstripped the Ferrari-powered contenders of Antonio Giovinazzi and Charles Leclerc by just a few km/h while Racing Point's Lance Stroll was the fastest through the speed trap of the Mercedes runners.

At the other end of the spectrum, Haas' Romain Grosjean and Kevin Magnussen proved that the issues impacting the pace of their VF-19 isn't just tyre related, with relatively weak top speed also a factor. 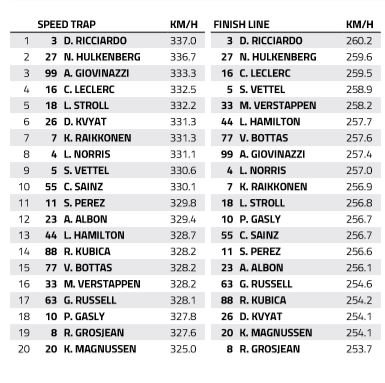