Lewis Hamilton succeeded in taking his sixth home victory in an action-packed British Grand Prix, a safety car period helping him to a big victory over his Mercedes team mate Valtteri Bottas and Ferrari's Charles Leclerc.

Vettel was blamed for the incident by the race stewards, and ended up finishing outside the points in 16th place in another blow to his title hopes. 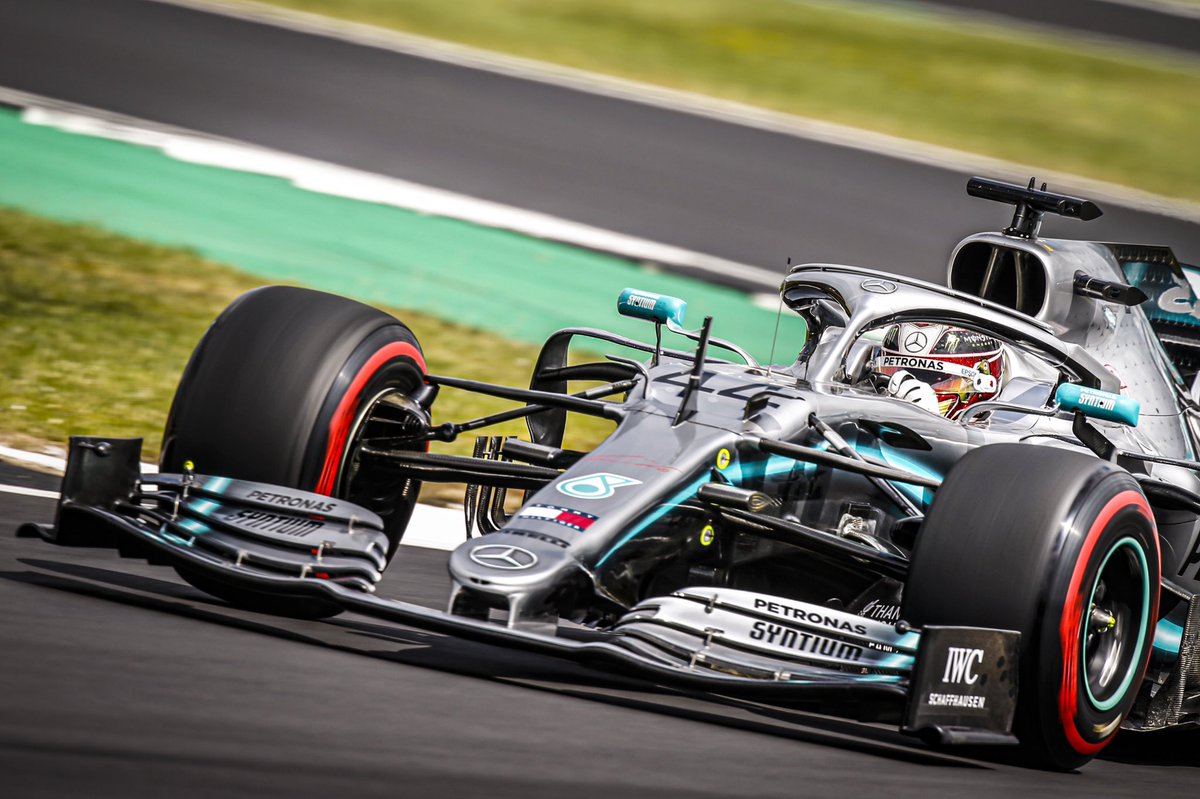 The English weather for race day was stubbornly resistent to the very idea of 'summer time', thick clouds stacked overhead and the breezy conditions forcing fans to throw on extra layers of clothing ahead of the start of the race. The cool conditions were doubtless a relief to Mercedes after their overheating issues last time out in Spielberg.

Valtteri Bottas and Lewis Hamilton took up their positions on the front row for the start of the race ahead of Ferrari's Charles Leclerc. However before the formation lap there was tumult around both Red Bull cars, with emergency rear wing changes required for Max Verstappen and Pierre Gasly due a last-minute issue identified on the end plates.

Fortunately the replacements were completed just in time, and all cars were present and correct on the grid when the lights went out to get the race underway. The top four got away in order, while Sebastian Vettel used the advantage of soft tyres to get around the medium-shod Gasly for fifth place into the first corner. Behind them, McLaren's Lando Norris got a strong start and promptly jumped Renault's Daniel Ricciardo for seventh through Maggotts and Becketts. 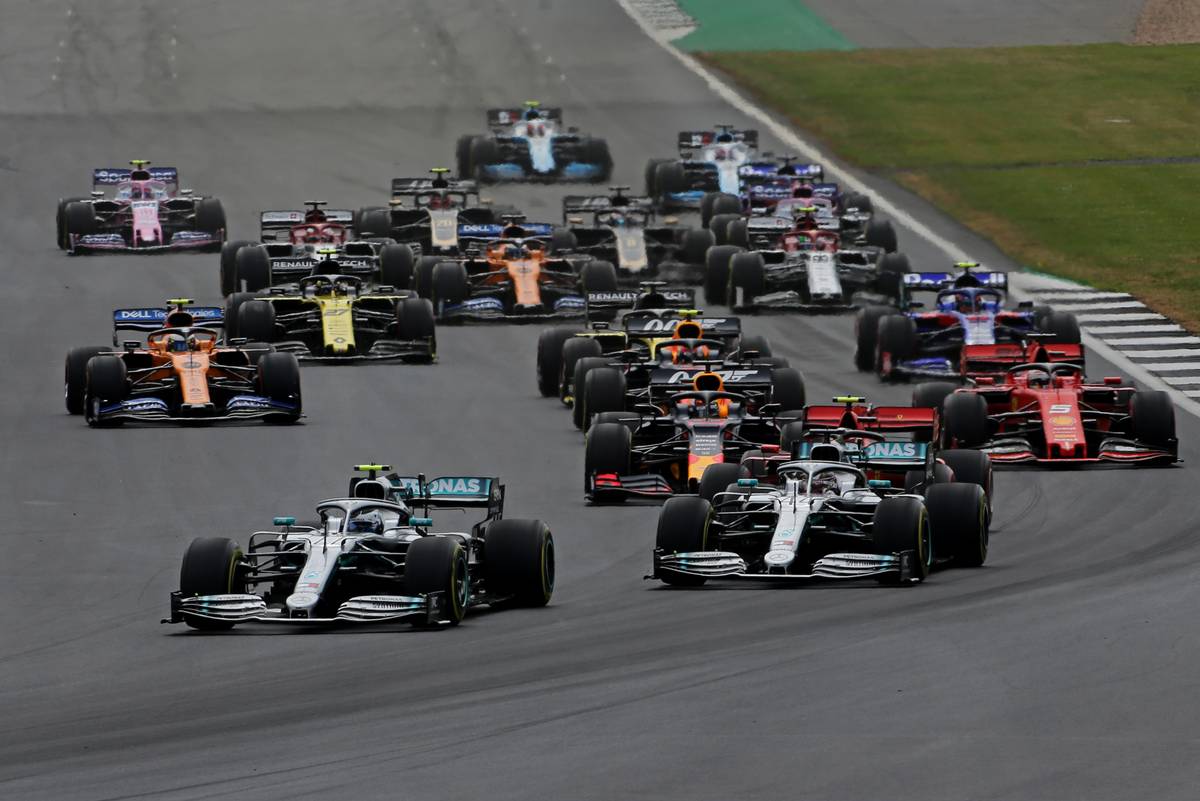 There were clearly no team orders in play at Mercedes, with Hamilton visibly faster than the Finn but frustrated every time he tried to make a move to take the lead. To the delight of the home fans, Hamilton finally got past on lap 4 after a slight error from his team mate running deep at Luffield - only for Bottas to regroup and immediately strike back to successfully reclaim the position through Copse.

Things were also heating up in the scrap for third, with Leclerc's soft tyres starting to suffer by lap 11 which allowed Verstappen to try an attack at turn 4 that was narrowly repelled. Vettel was immediately behind them hoping to pick up the pieces of any contact, only to end up being picked off by Gasly himself on lap 12.

Surprisingly it was Gasly who was the first of the leaders to pit on lap 13 for hard tyres in a bid to undercut the two Ferraris. Leclerc and Verstappen responded next time by, the two emerging from their pit boxes wheel-to-wheel. Verstappen reached pit exit first but then ran wide at turn 4 and was immediately overtaken on track by Leclerc, undoing all that excellent pit work by the Red Bull crew. Verstappen continued to throw everything he could into passing Leclerc, only to be rebutted every time.

The race leader concluded his first stint on lap 17. By taking on a second set of mediums he was committed to making another pit stop later in the race. Meanwhile Hamilton continued to stay out with a 14s lead over Vettel, but his hopes of pulling off an overcut on his team mate were fading with every passing lap. 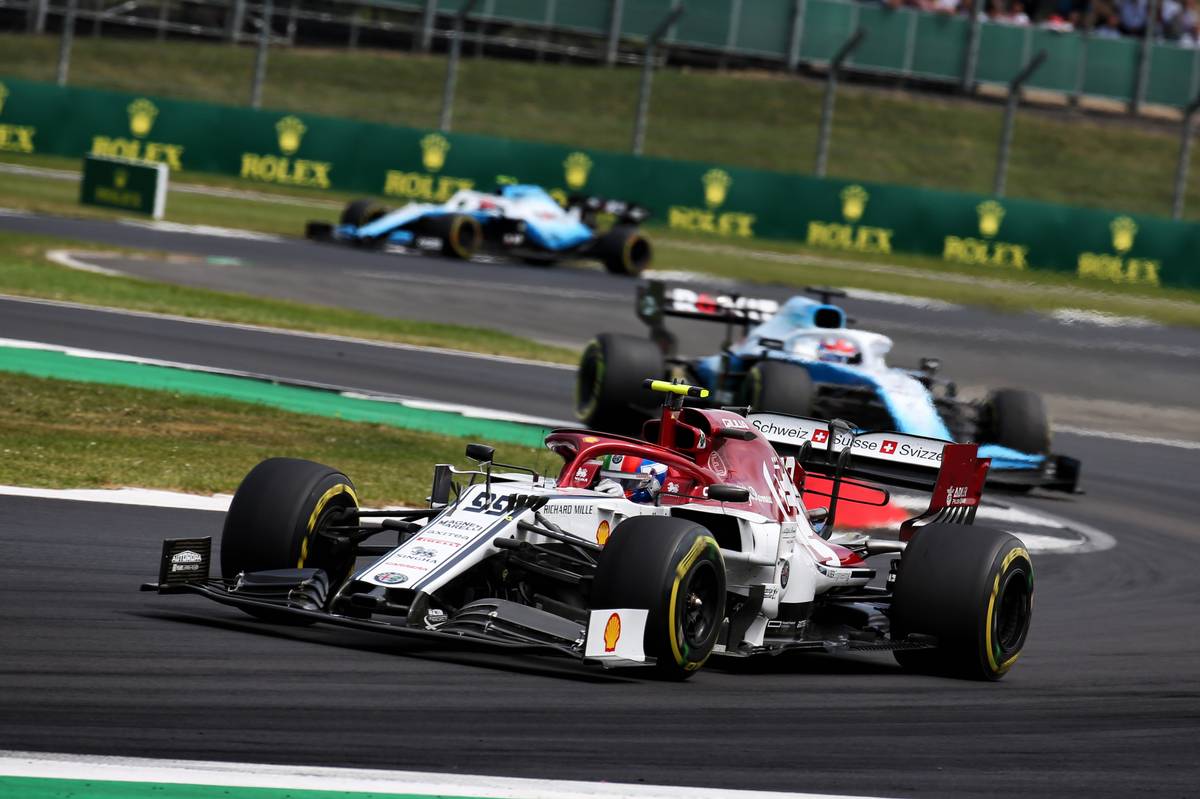 But that changes on lap 20 when a safety car was scrambled after Alfa Romeo's Antonio Giovinazzi went flying into the gravel at Club. Hamilton reacted immediately by diving into pit lane, enabling him to change to hard tyres while keeping the race lead. Vettel followed suit, coming back out in third between Bottas and Gasly. There was an opportunistic second stop for Verstappen and Ferrari attempted to do the same for Leclerc a lap later, but by then it was slightly too late and it cost him track position to the Red Bull.

The biggest gainer of the safety car shakeup was Carlos Sainz who was able to climb up to seventh place ahead of Norris, Albon and Hulkenberg. When racing resumed on lap 24 there was frantic action through the order as Leclerc muscled his way around Verstappen only to be put back in his place, while Racing Point's Sergio Perez lost his front wing on the back of Hulkenberg's Renault as they contended for position which allowed Ricciardo to gain multiple places in the aftermath and climb to ninth.

The Red Bull pit wall engineered a swap between their two drivers to release Verstappen to hunt down Vettel for third, while Gasly acting as rear gunner defending from ongoing attacks from Leclerc until the Ferrari pulled off a stunning move on the Frenchman though turn 3 on lap 36. Gasly attempted to respond but his older tyres left him at too great a disadvantage. 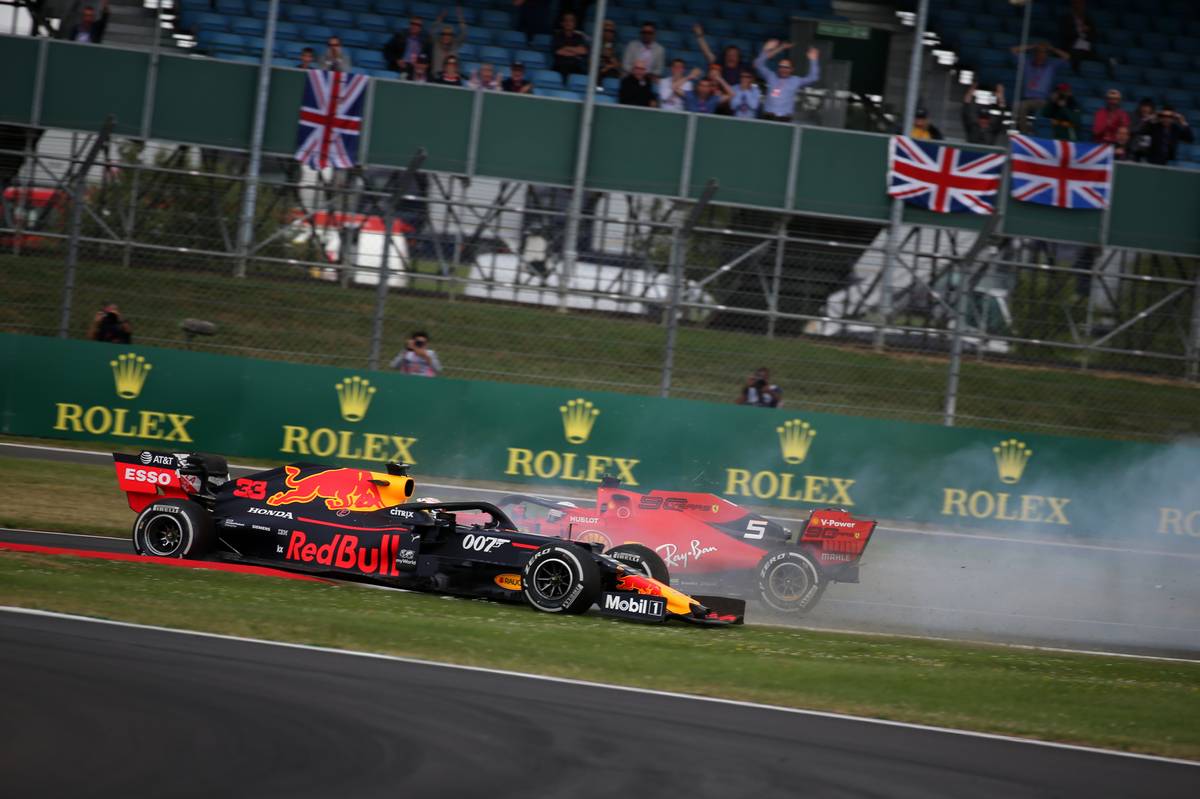 The balance of power was reversed between their team mates, and on lap 38 Verstappen swept past Vettel on the inside of Stowe in a fearless move. However elation at Red Bull turned to horror just seconds later as Verstappen braked to turn into Vale and was hit from behind by Vettel who had locked up. The impact briefly sent the RB15 into the air and both cars skidded into the run off, but amazingly they were able to pick up the pieces and get back underway. Verstappen had fallen to fifth, while and Vettel dropped to 17th after pitting for a new front wing.

"What was he doing?" Vettel asked over the team radio, clearly feeling that he was blameless in the incident. But the stewards confirmed they were looking into the matter and a few minutes later came confirmation that the Ferrari driver had been given a ten second penalty for causing a collision - although by now it made little difference to the outcome of the race or the damage to Vettel's faltering championship campaign.

The conflagration had opened up a hole for Bottas to make his second stop of the afternoon for a change to soft tyres on lap 46 without losing second position. Hamilton also appeared to receive multiple invitations to make an extra stop to protect against tyre degradation, but he pointedly declined and stayed out. 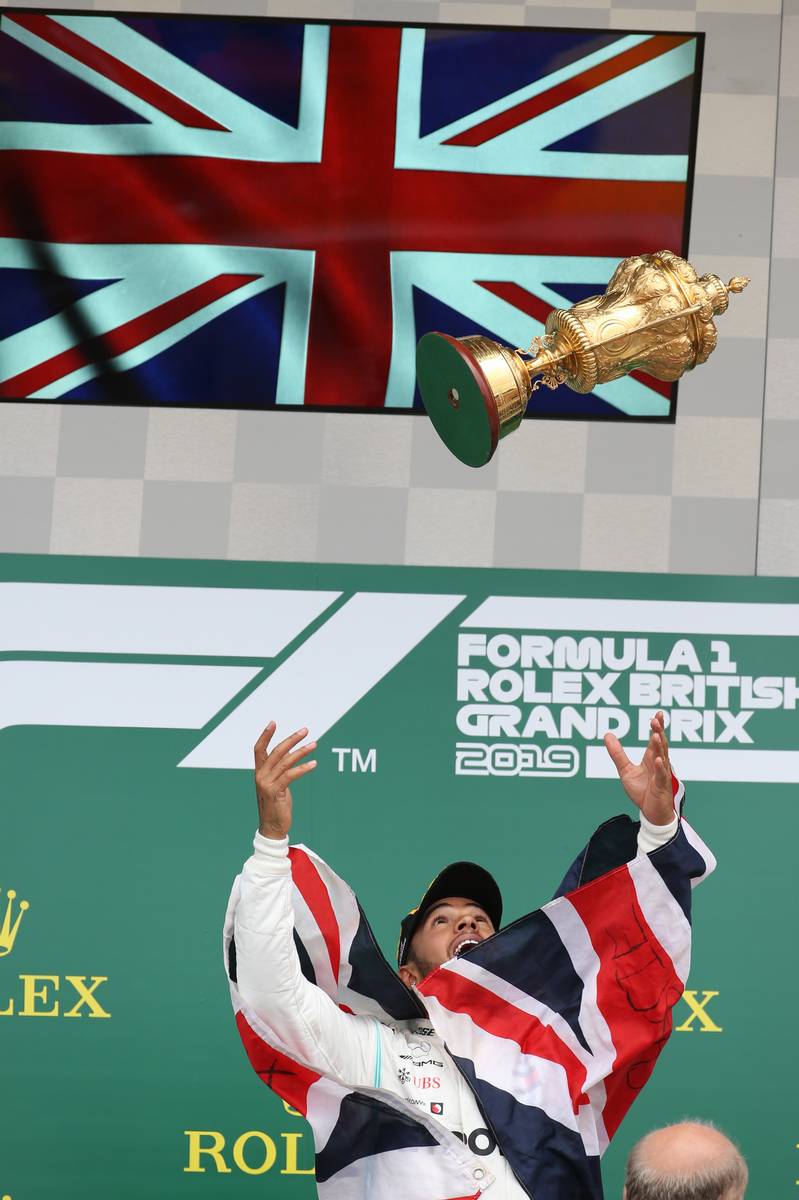 Hamilton's instincts were emphatically borne out, and he not only had enough rubber to get him to the finish without further incident, he was even able to set the fastest lap of the race on the final tour. Fresh tyres enabled Bottas to keep well out of reach of Leclerc in third, while Gasly held on to fourth place ahead of his wounded team mate Verstappen.

Sainz celebrated sixth place at the chequered flag after fending off Ricciardo in the closing laps, with Kimi Raikkonen finishing in eighth ahead of Daniil Kvyat, with Hulkenberg forcing Albon out of the points in the closing laps. A late pit stop dropped Norris to 11th ahead of Albo, followed by Lance Stroll and the two Williams cars of George Russell and Robert Kubica. Vettel was classified in 16th place after his penalty, with Perez the tast man still running on track at the finish after having to pit for a new front wing.

It had been another torrid race for Haas, with rear punctures for Romain Grosjean and Kevin Magnussen after a coming together forcing both drivers to make an early pit stop at the end of the first lap, dropping them to the back behind the two Williams. Magnussen subsequently returned to the pits on lap 8 to retire due to the collision damage he had sustained, and Grosjean followed suit two laps later.