Just one race after lowering the benchmark for the fastest pit stop in the history of F1, Red Bull Racing did it again at Hockenheim where Max Verstappen's all four wheels were changed in a record 1.88 seconds!

The Milton Keynes-based outfit and its blindingly fast and skilled mechanics were rewarded for the second race running with the DHL Fastest Pit Stop Award, and the team leads the current rankings from Williams and Ferrari.

Red Bull's new record shaved a few hundreds off the 1.91-second pit stop executed by the team at Silverstone with Pierre Gasly.

There was no respite for F1's team crews in last Sunday's race, with the changing and chaotic conditions forcing drivers into the pits on multiple occasions.

Verstappen made five tyre changes over the course of the 64-lap race while teammate Pierre Gasly stopped four times.

"The pit stop crew were unbelievable today," said Horner, who sent chief mechanic Phil Turner up to the podium to collect the constructor's trophy.

Alain Prost joins board of directors of Renault F1

Russell regrets not being more 'forceful' with Williams 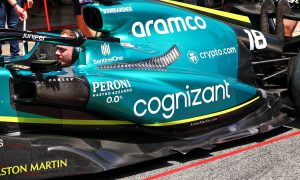