Lewis Hamilton charged down long-time leader Max Verstappen to claim victory in the 2019 Hungarian Grand Prix, and his eighth win of the season.

Verstappen had started from pole position for the first time in his career and executed the perfect launch. Hamilton came out on top in a first lap battle for second place with his Mercedes team mate Valtteri Bottas, who subsequently sustained front wing damage.

Denied the chance to take the lead on the track, Hamilton made an extra pit stop and then used his new tyres to catch and pass Verstappen in a thrilling two-man duel for victory.

Sebastian Vettel was a distant third ahead of his team mate Charles Leclerc, in what proved to be a somewhat disappointing day for Ferrari. 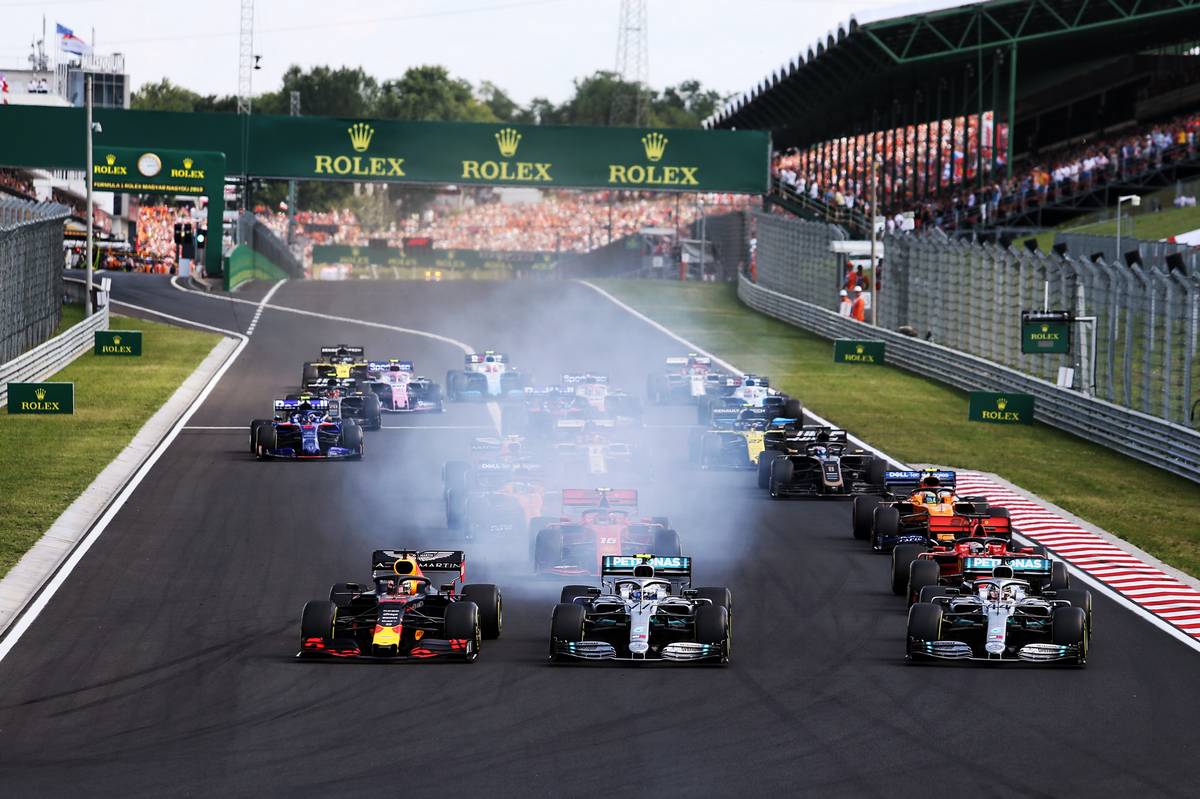 A warm and dry day welcomed the drivers to the starting grid, with the strong sunshine occasionally breaking through the clouds to promote higher than expected track temperatures. Max Verstappen made his way to pole position for the first time in his F1 career, with Mercedes Valtteri Bottas accompanying the Red Bull to the front row. Lining up immediately behind them, Lewis Hamilton and Charles Leclerc were ready to take any opening allowing them to pounce into the first corner of the tight, twisty Hungaroring.

When the lights went out, Verstappen cast aside recent poor starts to get the job done perfectly this time out. But Bottas had his hands full with his team mate, and while the Finn stayed ahead going into turn 1 he then locked up and lost out to Hamilton sweeping around the outside and forcing his way through at turn 2 with minor contact as Bottas ran wide. That allowed Leclerc to get through as well, with a further slight touch resulting in damage to Bottas' front wing in the process.

He soon lost an additional place to the the second Ferrari of Sebastian Vettel before finally acquiescing to a pit stop for a replacement wing at the end of lap 5. Mercedes also took the opportunity to bolt on a new set of hard tyres, while the leaders remained on their opening set of mediums. The only cars to have started on softs had been the McLarens of Carlos Sainz and Lando Norris in fifth and sixth, as well as Alfa Romeo's Kimi Raikkonen in seventh. Pierre Gasly had suffered another problematic start and lost positions to drop to eighth ahead of the only other soft-shod contender, Haas' Romain Grosjean, with the Renault of Nico Hulkenberg rounding out the top ten. 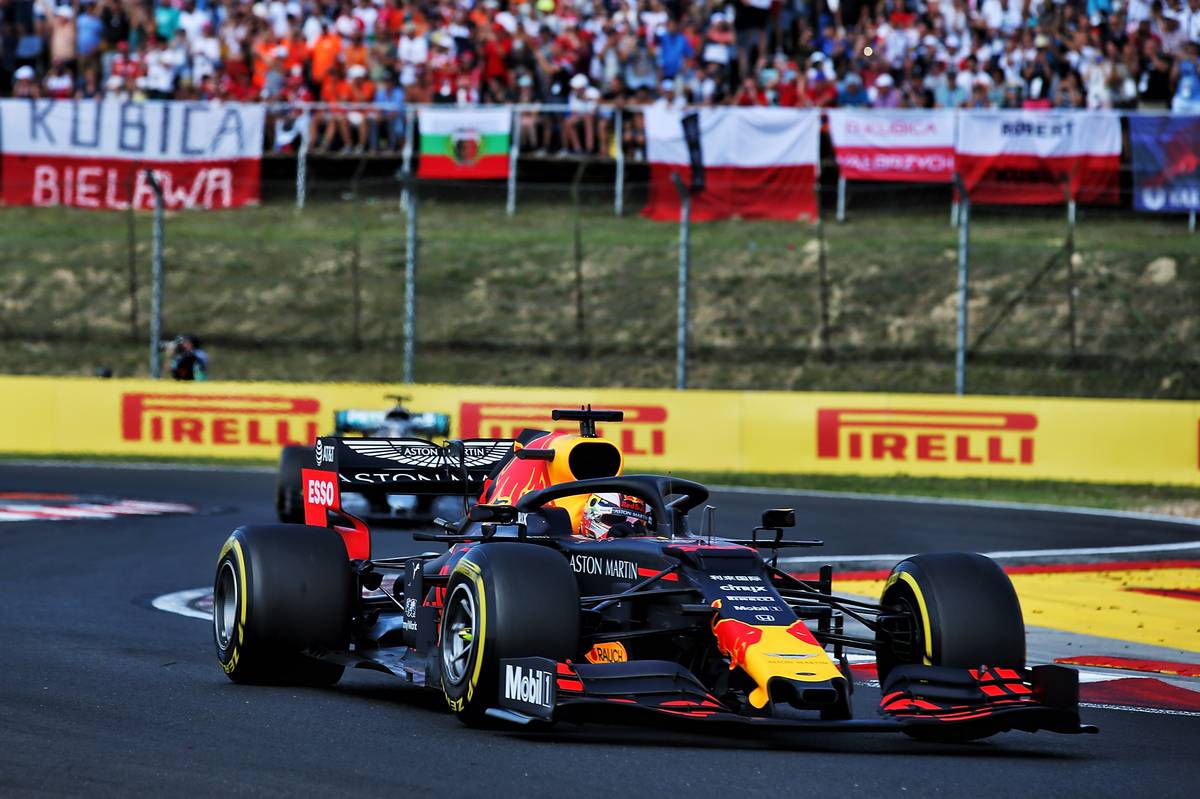 Verstappen had control of the race but Hamilton was staying with him, the pair pulling out a 15s lead over Leclerc and Vettel who had an almost 25s advantage over the McLarens. First to make scheduled pit stops were Alfa Romeo's Antonio Giovinazzi, Williams' George Russell and Robert Kubica, and the two Racing Points of Lance Stroll and Sergio Perez, all switching to the hard compound having seen Bottas slice his way back through the field after dropping to the back with his enforced early stop. With the order otherwise largely static, the most entertaining battle on track was between Toro Rosso pair Daniil Kvyat and Alexander Albon which saw them go wheel-to-wheel for 12th place on lap 19 in a textbook case of acceptable hard-but-fair racing between team mates.

By lap 24 Verstappen was making repeated calls to the Red Bull pit wall about his tyres losing grip, and Hamilton was able to close the gap further when the Dutch driver was briefly held up in traffic. Two laps later, Verstappen finally came in for his stop and Mercedes was on the team radio to tell Hamilton that 'it's hammertime!" Crucially Verstappen himself was back out on track ahead of Leclerc and Vettel, although Leclerc himself pitted two laps later

Hamilton's attempt at an overcut had failed to pay off and he pitted at the end of lap 31. It meant he had dropped five seconds behind the Red Bull upon his return, but the fresh set of tyres enabled him to immediately start slashing the gap to the leader who was soon within the DRS danger zone. Lapped traffic was giving both drivers problems, but the twisty nature of the circuit favoured the defender and Verstappen was able to stay ahead. Hamilton's best chance came on lap 39 after a slight mistake by the Red Bull, but after getting his nose in front he ran off at turn 4 and was obliged to hand back the position rather than face a penalty. After that Verstappen gathered himself back up and started to pull away again, the immediate storm appearing to have passes as Hamilton was told to back off to allow his brakes to cool down. 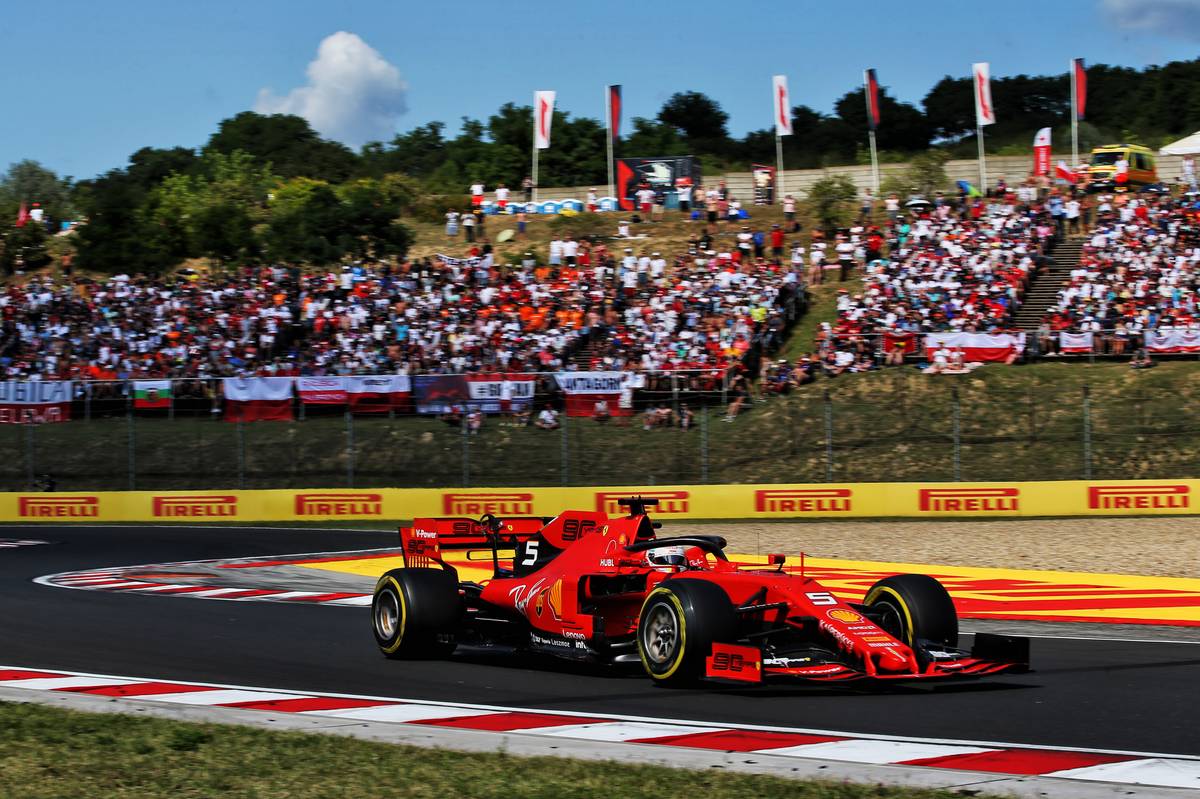 Vettel was the last of the front runners to pit, having held out to lap 40 which meant that he was now able to use the quicker soft tyres to get to the finish. However it also dropped him back to fourth, some 20s behind his team mate Leclerc, giving him a lot bit still to do in the remaining 30 laps of the race.

Just when it looked as though battle for the lead was about to recommence, Mercedes made the surprise decision to call Hamilton in for a second pit stop and a new set of medium tyres at the end of lap 48. It dropped him 20 seconds behind Verstappen, who was already struggling for grip and complaining of graining. However the move had seemingly caught out Red Bull, who no longer had the on-track gap to bring their man in and still retain the lead. Verstappen would simply have to tough it out, even though Hamilton was taking over a second off his rival's lead with every passing lap despite encountering traffic.

Once in clear air, Hamilton startled to rattle off new track record fastest lap times one after another, while Verstappen's pace at the front started to falter as his tyres ran out of rubber. With five laps to go, Hamilton was right on the Red Bull's tail and duly used DRS to blast past Verstappen and wrest the lead of the race from the crown favourite on lap 67. A deflated Verstappen declared that he couldn't make it to the finish on the worn tyres and made a final 'free' pit stop. 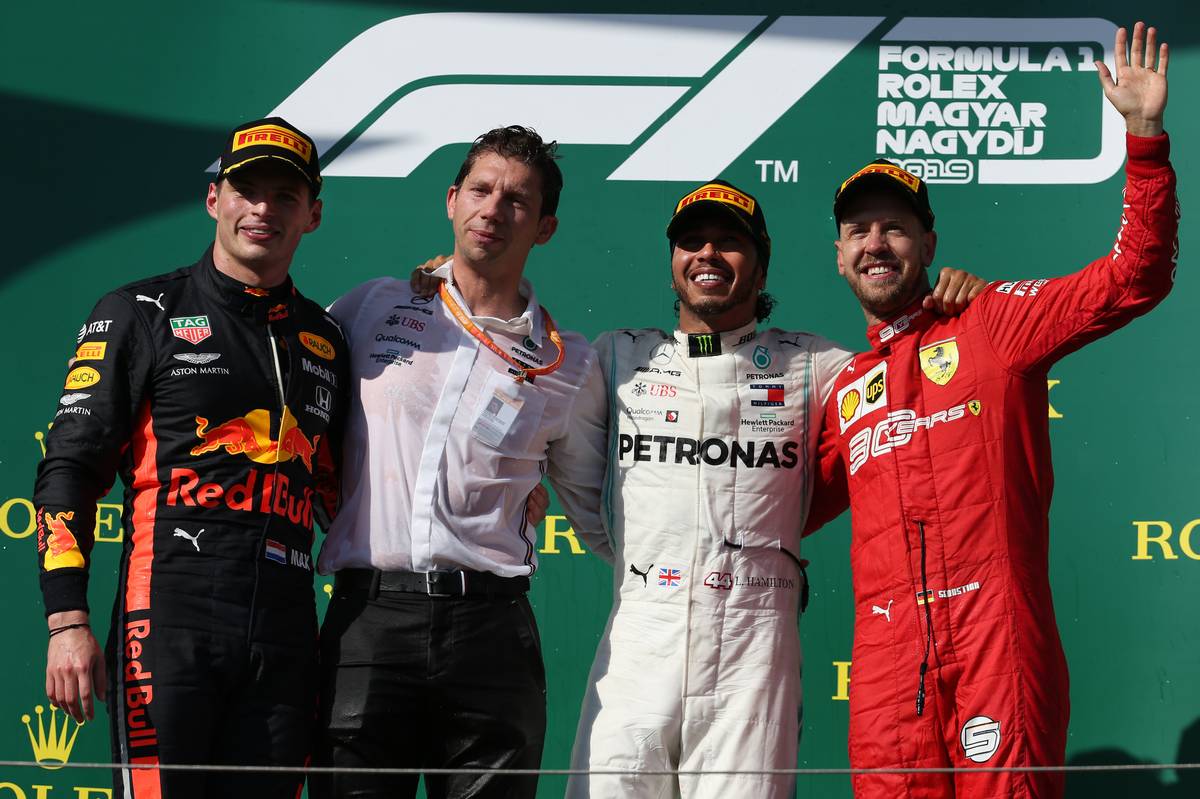 Neither man had to worry about a late challenge from the two Ferraris who were now over a minute slower, Vettel making a late pass on Leclerc on lap 69 to claim the final podium position. The rest of the field finished off the lead lap, Sainz proving to be best of the rest in fifth ahead of Gasly, with Raikkonen just ahead of fellow Finn Bottas at the line followed by Norris and Albon.

Perez just missed out on the points, with Hulkenberg in 12th ahead of Kevin Magnussen, Daniel Ricciardo, Daniil Kvyat, George Russell, Lance Stroll, Antonio Giovinazzi and Robert Kubica. The only retirement of the afternoon was Romain Grosjean, who pulled into the Haas garage on lap 52 with the team reporting a water pressure issue.

Hamilton: 'Hats off to the team for Hungary strategy call'