Lewis Hamilton successfully battled his way to victory in the 2019 Russian Grand Prix, his fourth career win in Sochi and his ninth victory of the season. He finished ahead of his team mate Valtteri Bottas in a Mercedes 1-2.

Hamilton had dropped to third place at the start, but reemerged on top after taking advantage of a virtual safety car to make his pit stop. Polesitter Charles Leclerc took the final podium place following a stormy afternoon for Ferrari.

Ferrari's strategy to help Sebastian Vettel take the lead at the start had resulted in a dispute about team orders when he was ordered to swap positions with Leclerc, but the issue became moot when Vettel was forced to retire with MGU-K failure shortly after he made his mid-race pit stop. 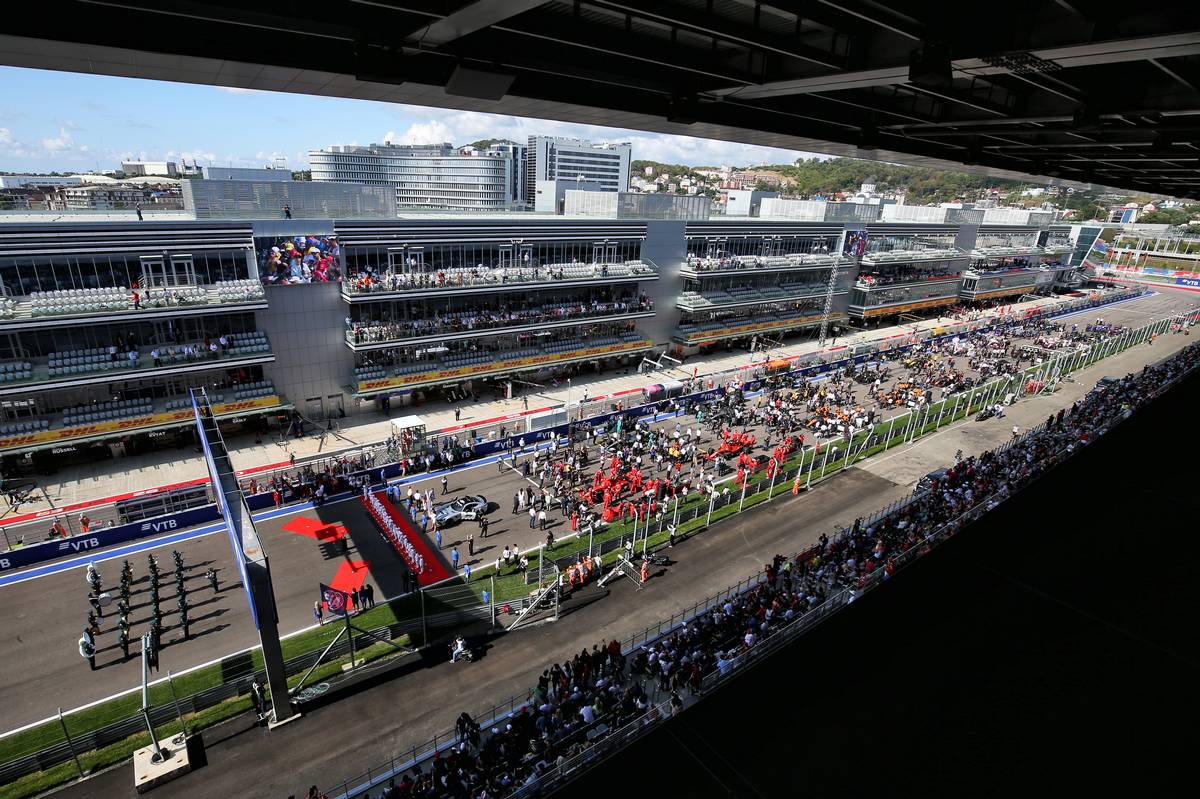 It was a dry, sunny day in Sochi on Sunday. More importantly it was warmer than it had been so far all weekend, which meant that Mercedes' gambit of being the only team in the top ten to opt for medium compound tyres was looking like a potentially good call. It would all depend on what happened in the run down to turn 1 when the lights went out.

Pole sitter Charles Leclerc got a solid launch and was able to fend off Lewis Hamilton down the straight, but neither man was a match for Sebastian Vettel who slipstreamed past them both to take the lead in turn 1. Hamilton nearly lost another spot when he was challenged by McLaren's Carlos Sainz who had already dispatched Valtteri Bottas, but the Briton was just able to hold on to position as the cars slotted into single file.

The fight for position was suspended by the safety car being scrambled, after a midfield compression saw Romain Grosjean, Daniel Ricciardo and Antonio Giovinazzi go three-wide into turn 4. The Haas was spun round and into a heavy broadside impact with the outside tyre wall forcing an instant retirement, while the Renault limped back to pit lane with a left rear puncture needing attention; however, extensive floor damage from the clash would eventually force him to retire from the race. Giovinazzi also needed to pit for a new front wing, while elsewhere his Alfa Romeo team mate Kimi Raikkonen was handed a drive-thru penalty for a false start. 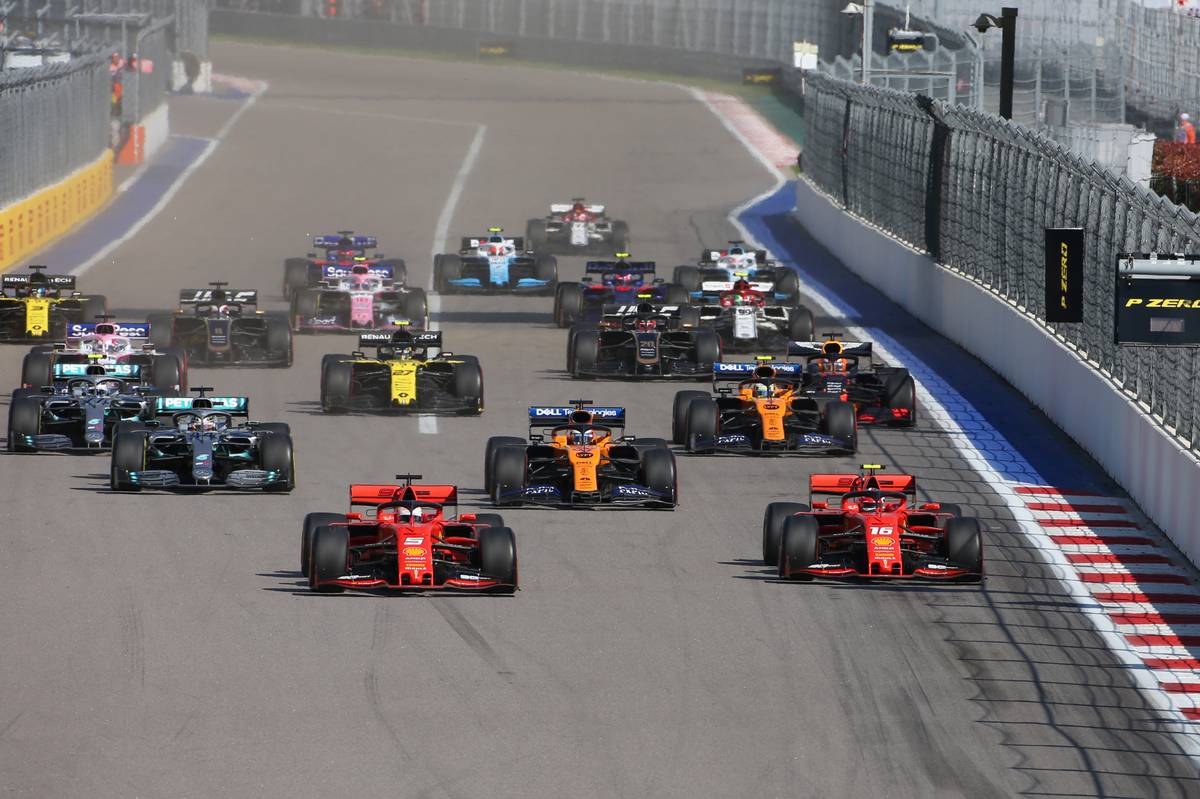 At the restart on lap 4 it was Vettel leading Leclerc, Hamilton, Sainz, Bottas and Lando Norris, with Sergio Perez up to seventh ahead of Max Verstappen, Nico Hulkenberg and Kevin Magnussen. No one was able to make any immediate improvement as the safety car peeled in and the cars got back up to speed, but by lap 7 Bottas had the measure of Sainz and made short work of passing the McLaren down the straight to retrieve fourth place. A lap later it was Verstappen's turn to gain a place with a pass on Perez into turn 4.

At the front Vettel had pulled well out of DRS range of Leclerc. However there were a flurry of messages over the Ferrari team radio indicating that the team was orchestrating a swap between their two drivers to put Leclerc back in front. The implication was that Leclerc's slower start had been in line with a pre-planned team strategy to give Vettel a tow, with the assurance that he would get the lead back once things settled down. But with the two Mercedes drivers in close pursuit, Vettel was unwilling to slow up and risk getting ambushed and so he kept his foot down and stayed out of reach at the front. The effort in Leclerc's voice not to let his anger show was apparent, as the team eventually backed down and decided to delay any swap until later in the race. In the meantime, Vettel floored it and was soon pulling away from the field with a succession of fastest laps that suggested tyre wear on the soft compound was not proving to be a consideration after all.

Verstappen needed no help from the Red Bull pit wall to continue his progress through the order. He dived down the inside of turn 2 to pick up sixth place from Norris on lap 12, and immediately set his sights on Sainz who by now was three seconds down the road. It took him five laps to cut the gap and make short work of the Spaniard on lap 17 to climb to fifth place, having started from ninth on the grid due to engine penalties. His team mate Alexander Albon was also on the move after starting from pit lane due to repairs on his car following his Q1 accident on Saturday; a DRS pass on Toro Rosso's Daniil Kvyat into turn 13 put him up to 12th with Pierre Gasly next on his to-do list, which he soon ticked off despite a potentially worrying problem with his brakes: "I'm absolutely smashing the pedal," he reported. 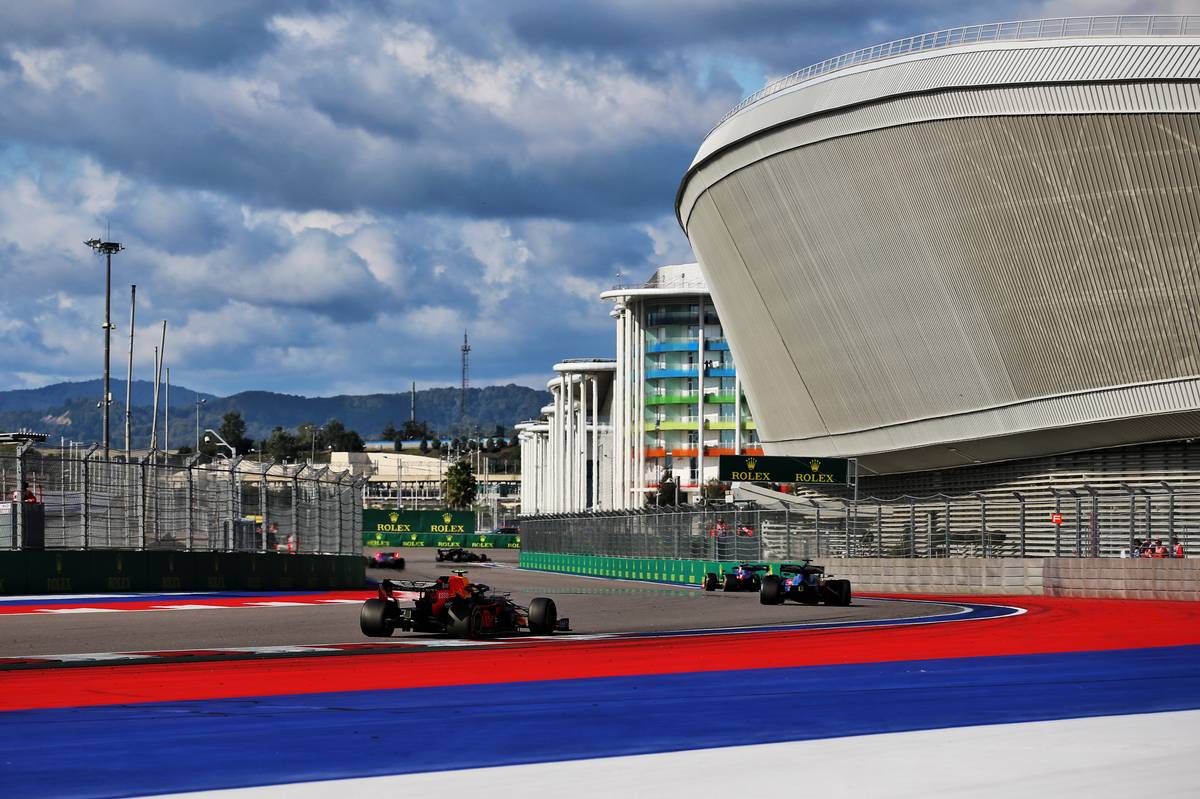 Hulkenberg was the first of the top ten to make a scheduled pit stop on lap 17, with Norris extending his own first stint until lap 21 before pitting a lap before Sainz. Their immediately improved pace encouraged Ferrari to react by bringing Leclerc in from second place on lap 23, the Monegasque rejoining in fourth in the big on-track gap between Bottas and Verstappen.

Now the clock was ticking on how long it would take Vettel to make his own stop. On lap 24 he reported that his rears were falling off, but pace-wise he was still a match for both of the two Mercedes cars. Ferrari finally called him in on lap 27 and it was a slightly slower stop than Leclerc, all of which proved sufficient to enable Leclerc to finally pick up that promised track position. However seconds later the entire issue became moot as Vettel reported a loss of MGU-K power, forcing him to pull over and retire on lap 28.

A virtual safety car to enable track workers to retrieve the expired SF90 meant that most of the cars yet to stop now had the opportunity to dive into pit lane, including the two Mercedes drivers. The VSC advantage allowed Hamilton to come back out in the lead on soft tyres, seeming vindication of Mercedes' decision to start on the medium compound to give them greater flexibility when it came to their race strategy. 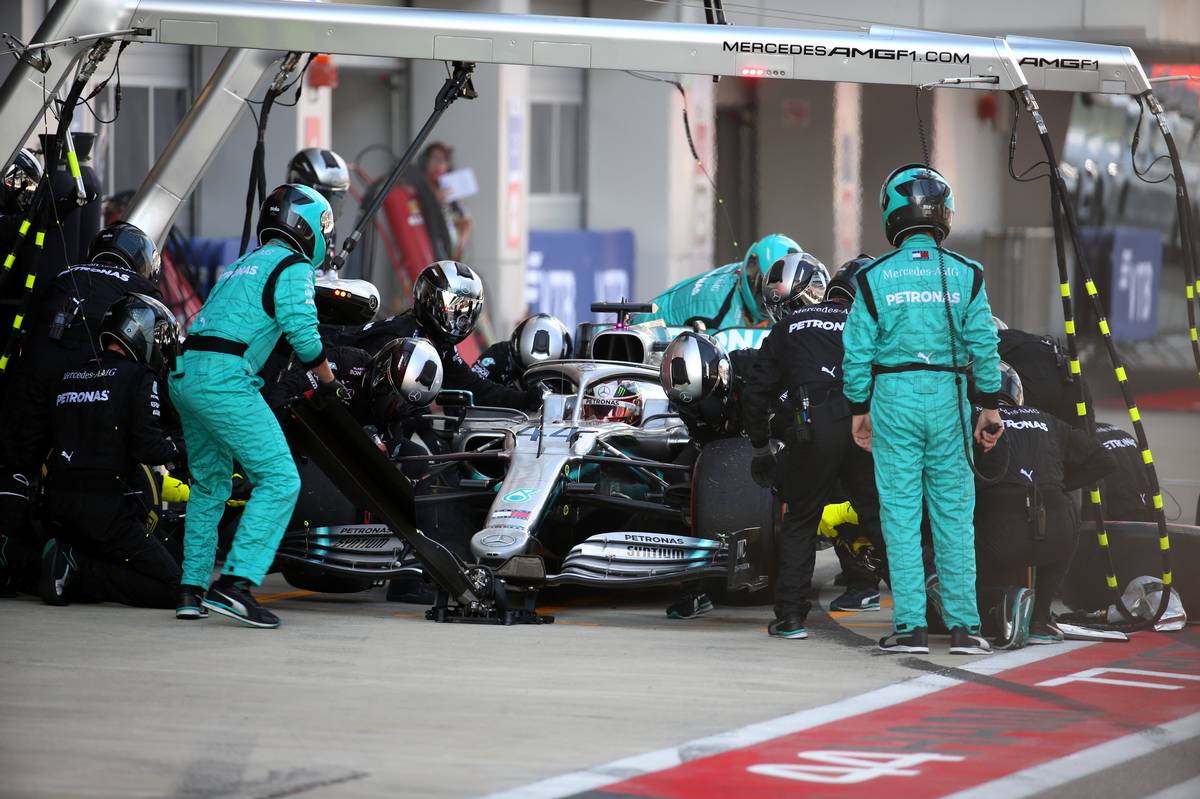 The race had barely gone back to green flag conditions when George Russell suffered brake failure and ran nose-first into the tyre wall at turn 8, making it the second consecutive retirement of the season for the rookie. His Williams team mate Robert Kubica was also immediately retired by the team as a precautionary measure.

The latest incident triggered a second full safety car which allowed Albon to pit, and Ferrari realised that they now faced a serious issue with Leclerc who was on older medium tyres while those around them were on the fresher, softer and faster compound. Leclerc was summoned to pit lane for his second stop on lap 31 to give him a fighting chance in the closing laps, even if it meant dropping to third behind Bottas in the meantime.

The race finally got back underway on lap 33 with Hamilton and Bottas leading Leclerc, Verstappen, Sainz, Magnussen, Norris, Sergio Perez and Lance Stroll, and Albon now rounding out the top ten. Even with DRS temporarily deactivated following the caution, Albon immediately cleared the two Racing Point cars at the restart, while at the front Leclerc got straight down to business pressuring Bottas for second place. The Finn however was able to parry the advances despite the Ferrari's well-established straight-line speed, and he successfully stayed in front even when DRS was eventually turned on again. 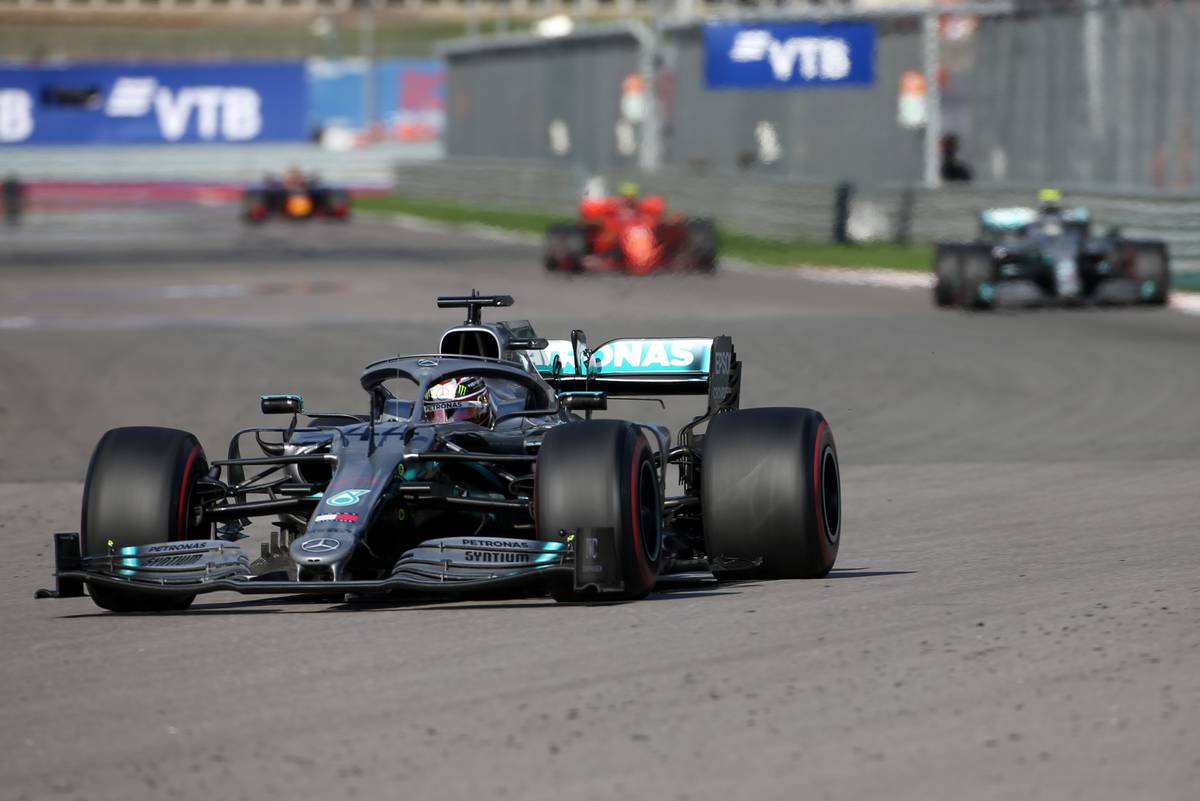 While it was status quo at the front, there was plenty of action further back as Hulkenberg passed Stroll into for tenth place and the two Toro Rossos scrapped over 12th place, resulting in Gasly overrunning turn 2. It required him to slalom his way through the controversial bollards, which allowed Raikkonen to fly past at the exit. Albon meanwhile was enjoying his late switch to the soft compound and had made quick work on Norris, and was now turning up the heat on Magnussen for sixth place. That deed was finally done on lap 43.

Hamilton succeeded in opening out a gap at the front and was now assured of victory. It was a different story as Bottas and Leclerc continued to fight over second, but the Finn ultimately proved immovable all the way to the finish. Leclerc also narrowly failed to overcome Hamilton in the duel over the bonus point for fastest lap.

Verstappen just missed out on a podium in fourth followed by Albon who made a successful late move on Sainz for fifth place - a strong result for the rookie given his pit lane start. The rest of the points went to Sainz, Perez, Norris, Magnussen and Hulkenberg, after Magnussen was handed a five second penalty for gaining an advantage by going off track at turn 2 in the closing laps. Missing out this week were Stroll, Kvyat, Raikkonen, Gasly and Giovinazzi with five retirements in total including Kubica, Russell, Vettel, Ricciardo and Grosjean.

Leclerc and Vettel at odds over pre-race agreement