Ferrari will call on Charles Leclerc to test Pirelli's 18-inch tyres at Jerez de la Frontera next month, another indication by the Scuderia of the Monegasque's importance to the team's future.

As part of Pirelli's development programme for its 2021-spec tyres, Ferrari will supply an SF90 mule car to the two-day test that will take place in Spain on February 8-9.

Mercedes contributed to the programme last month with two days of running with George Russell in Abu Dhabi, after F1's post-season test at Yas Marina.

Interestingly, Scuderia boss Mattia Binotto has assigned Leclerc, who is under contract with the Italian outfit until the end of 2024, rather than the more experienced Sebastian Vettel whose future with the House of Maranello beyond this season is uncertain.

According to a report from Motorsport.com, Ferrari is set to dedicate a full day of running to Pirelli's 18-inch tyre and then switch its car to 13-inch rubber on the second day in order to compare the collected data.

Pirelli has agreed with the FIA to conduct 25 days of tyre testing this year ahead of the introduction in 2021 of its 18-inch product.

As a reminder, pre-season testing for the 2020 campaign will kick off at the Circuit de Catalunya in Barcelona on February 19 and consist of two three-day events. 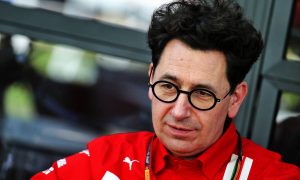 Binotto: Delay to 2021 regs not 'an easy decision' for Ferrari