Mark Webber says the fight for the 2020 title will pin Lewis Hamilton against Max Verstappen, the former F1 driver dismissing a challenge from Ferrari.

Verstappen won three races last year and finished third in the 2019 drivers' standings behind a dominant Hamilton and his Mercedes teammate Valtteri Bottas.

But a Red Bull Racing RB16 that should be quite competitive in Austria - where Verstappen won last season - and in Hungary could give the Dutchman an edge with which to build his title bid. And that would bode well for the 22-year-old title chances.

"I think it’s between him and Lewis," Webber told Dutch program Ziggo Sport. "I don’t see anyone else at the party to be honest.

"Ferrari won’t be there this year. I don’t see anyone else that can take it to Lewis. So it has to be Max."

But Webber admits there's a prerequisite for Verstappen to give Hamilton a proper run for his money. The Aussie has no doubts that Red Bull can deliver a competitive car to their star driver but insists Honda will need to hold up its end of the bargain.

"I have faith in Milton Keynes, in their aerodynamics and how they operate as a team," said Webber who raced for RBR for seven seasons.

"It’s just a question of whether Honda will be able to take on Mercedes for an entire season.

"They [Mercedes] probably still have a bit more power, then you can also drive with more downforce and just make your life a little easier."

Renault juniors could be 'fantastic options' for 2021 - Abiteboul 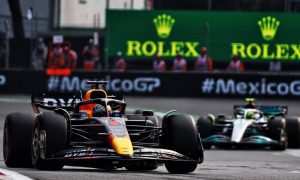