F1 director of motorsport Ross Brawn says that Lewis Hamilton's ability to nurse his car to the British GP's checkered flag despite a tyre shred to pieces was simply a "mind blowing" achievement.

Hamilton was on track for a dominant win at Silverstone on Sunday when front-left tyre failures suffered by his Mercedes teammate Valtteri Bottas and McLaren's Carlos Sainz in the closing stages of the event suddenly raised the tension on the Brackley squad's pitwall.

Hamilton was informed of the failures and ordered to manage his tyres on the final two laps, but the Briton soon found himself also dealing with delaminated front-left footwear on his W11 Black Arrow.

The Mercedes crossed the finish line on three wheels and with only five seconds to spare over runner-up Max Verstappen, sparking a roar of relief in the German team's garage.

"Lewis’s race looked a cakewalk until the last lap of the race," said Brawn in his British GP debrief.

"It wasn’t of course, because he was driving superbly for the whole of the race.

"However, let us reflect on what he achieved on that last lap. No front left tyre on the car and he still took Copse and Stowe corners at more than 130km/h.

"He reached 230km/h on the straight with only three wheels, and a front left tyre flailing around - absolutely mind blowing.

"He judged it to perfection to win the race by a few seconds and a brilliant example of the amazing talents and bravery of Lewis." 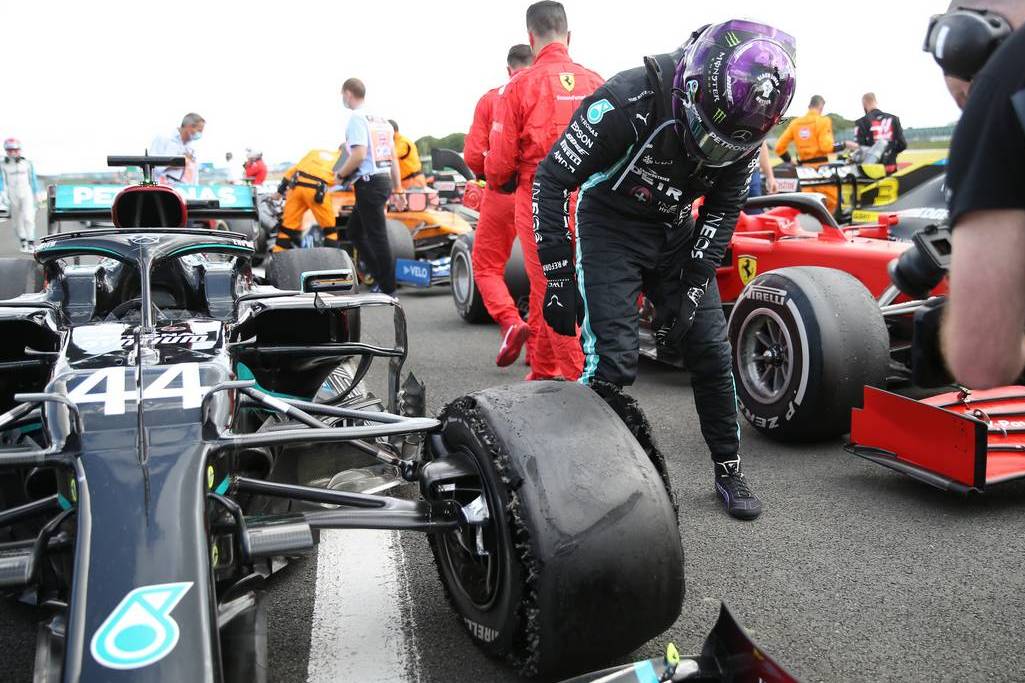 Red Bull could have reaped the benefits of Mercedes' misfortune had the Milton Keynes team not taken the cautious decision to pit Verstappen for fresh rubber and left its charger out for the remaining few laps.

Team boss Christian Horner defended the prudent call, insisting there were no guarantees that Verstappen would have made it to the end without encountering a tyre issue of his own.

Brawn supported Red Bull's decision, insisting it was justified by the circumstances that were prevailing at the time.

"As things worked out, Red Bull’s decision to pit Max Verstappen on the penultimate lap cost them the race, but they wouldn’t have known that at the time," said Brawn.

"As soon as Bottas did such a slow lap and then had to pit, Verstappen who was promoted to second was afforded a free pit stop.

"I don’t know in Red Bull’s mind whether they were thinking that because there was a tyre problem, they would give themselves some insurance or whether they were going for the extra point for fastest lap, or probably a combination of both.

"I’m sure they would never have imagined for a moment that the failure with Bottas at that stage would be replicated and that Lewis would suffer the same type of issue, so I don’t think they made a bad decision.

"I think it was an unlucky decision, because as it subsequently proved, he could have won the race.

"He was only in that position because of what happened to Bottas. I would have made the same call as it appeared to be a free pit stop."

Abiteboul: Result 'one of our strongest' since return to F1