Mercedes' Lewis Hamilton led from lights to flag in the 2020 Spanish Grand Prix to extend his championship lead over Max Verstappen and set a new F1 record for podium finishes.

Verstappen had to settle for second place in the race, while a poor start saw Valtteri Bottas drop two places off the grid which left him with too much ground to make up on the Red Bull during the course of the race.

A strong outing for Racing Point saw Lance Stroll and Sergio Perez finish just off the podium, with Carlos Sainz sixth. Sebastian Vettel pulled off a one-stop strategy for seventh while his Ferrari team mate Charles Leclerc was the only retirement of the race with an electrical issue. 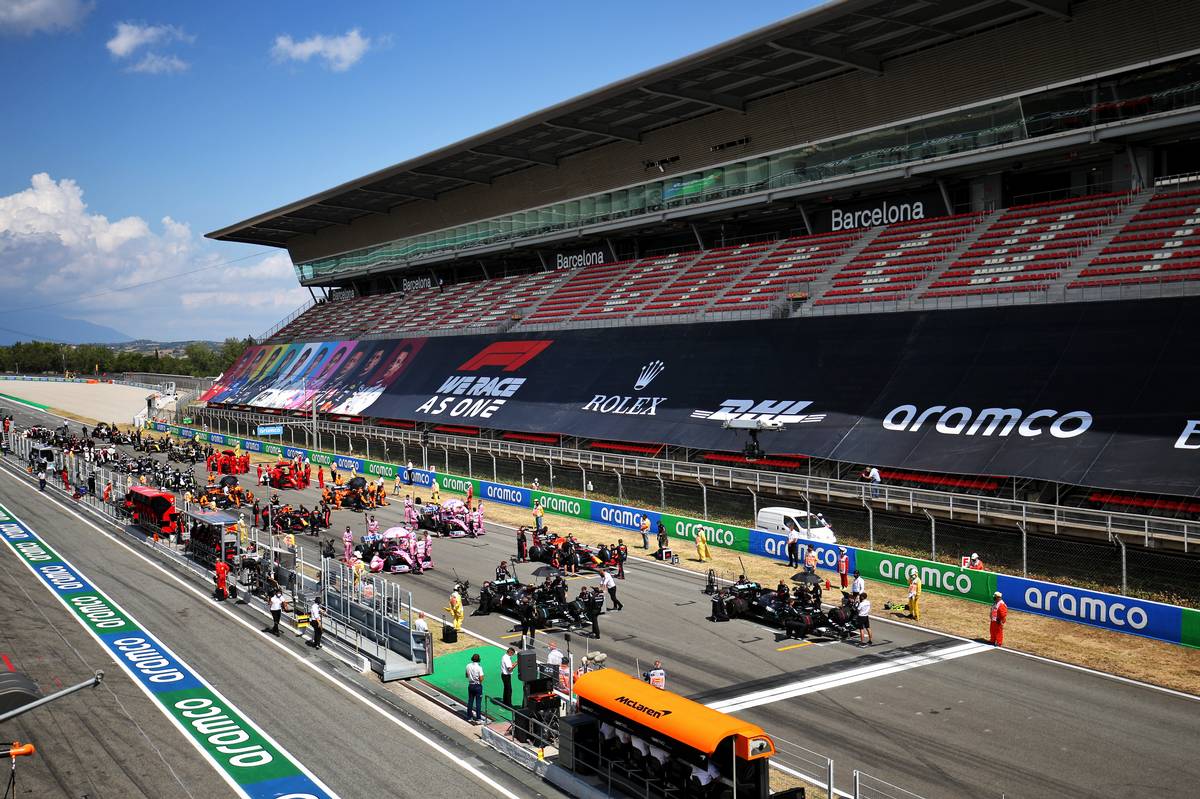 Any rain in Spain was far from the Circuit de Barcelona-Catalunya on a hot and sunny August afternoon, with the drivers conspicuously seeking a cool patch of shade wherever they could find it in the pre-race ceremonies. Then it was time to suit up and jump into the cockpit of their cars in readiness for lights out for the sixth race of this most unusual of F1 championship seasons.

Lewis Hamilton and Valtteri Bottas had secured another front-row lock-out for Mercedes, with Max Verstappen renewing Red Bull's subscription to third place on the grid alongside Racing Point's Sergio Perez. Those on the racing line - including Hamilton, Verstappen and Lance Stroll from fifth - got good starts, but it was a different story on the other side of the grid where Bottas failed to fend off Verstappen into the first turn and then immediately lost another place to Stroll diving down the inside.

With Bottas down to fourth and Perez demoted to fifth, Alex Albon was holding steady in sixth ahead of Carlos Sainz, while AlphaTauri's Pierre Gasly had made up ground to take eighth place ahead of Charles Leclerc and Lando Norris. Sebastian Vettel remained in 11th, the Ferrari the highest-placed car starting on the medium compound tyres while all those ahead of him were on softs, but he was soon under heavy pressure from Gasly's team mate Daniil Kvyat. 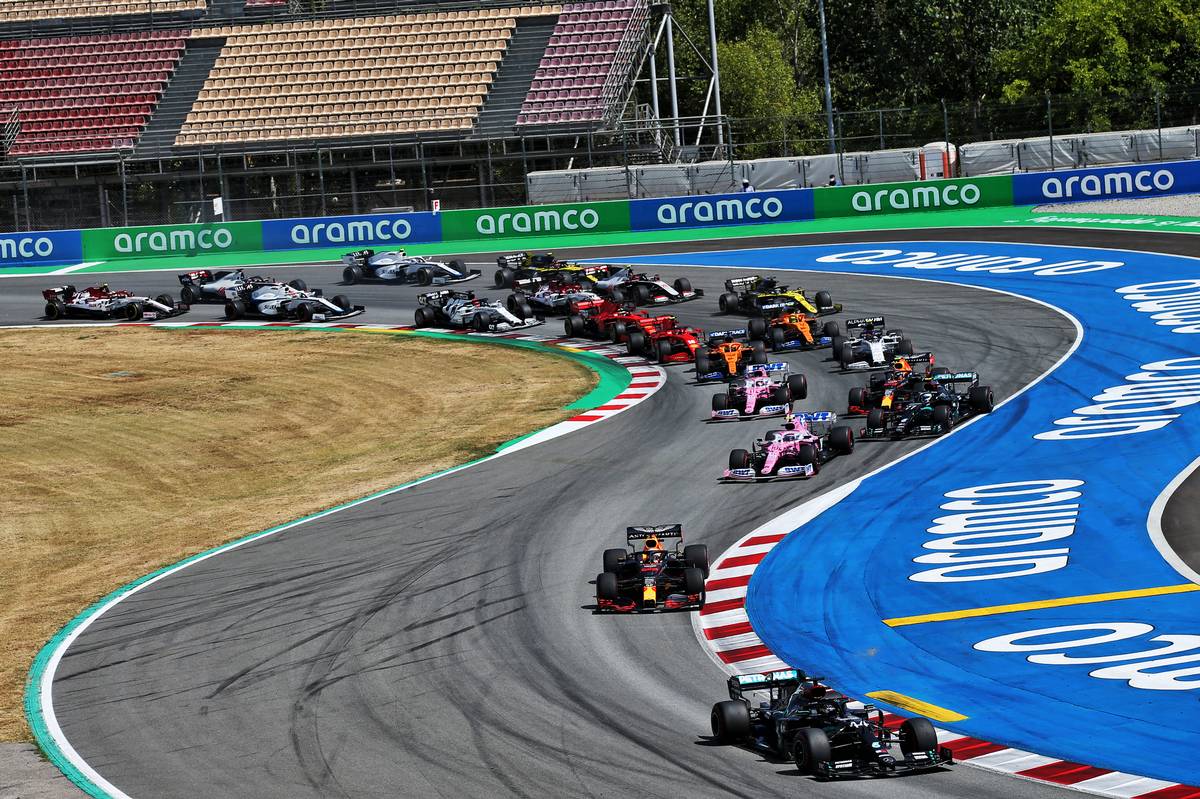 It took Bottas five laps before he was able to find his way past Stroll to reclaim third place, but he was now two and a half seconds behind Verstappen. Hamilton was by no means romping away at the front, but he was out of DRS range of the Red Bull for the time being as tyre management became the top priority for all the drivers.

With a dozen laps in the bag, Hamilton felt secure enough to turn up the heat and to start punching in some fastest laps to pull away from Verstappen who seemed unable to stay with him. In stark contrast to last weekend it was the Red Bull that appeared to be struggling with tyre wear, and Verstappen's team mate Alex Albon became the first driver to pit on lap 18 with a surprise change to the hard compound for his second stint. Albon dropped to 16th behind Esteban Ocon as a result, allowing him to follow the Renault past Kimi Raikkonen's Alfa Romeo a couple of laps later.

Verstappen was growing increasingly restive on the soft tyres, but Red Bull were unwilling to bring him in because of the risk of coming back out sandwiched between the two Racing Points. He finally stopped for new mediums on lap 22, and a world class turnaround by the pit crew ensured he avoided the danger and successfully retained third place. That triggered a response through the rest of the field: Sainz was in next time by, and Hamilton responded a lap later with Bottas arriving hot on his heels in a double-staking strategy which ultimately failed to get the jump on Verstappen for second place. 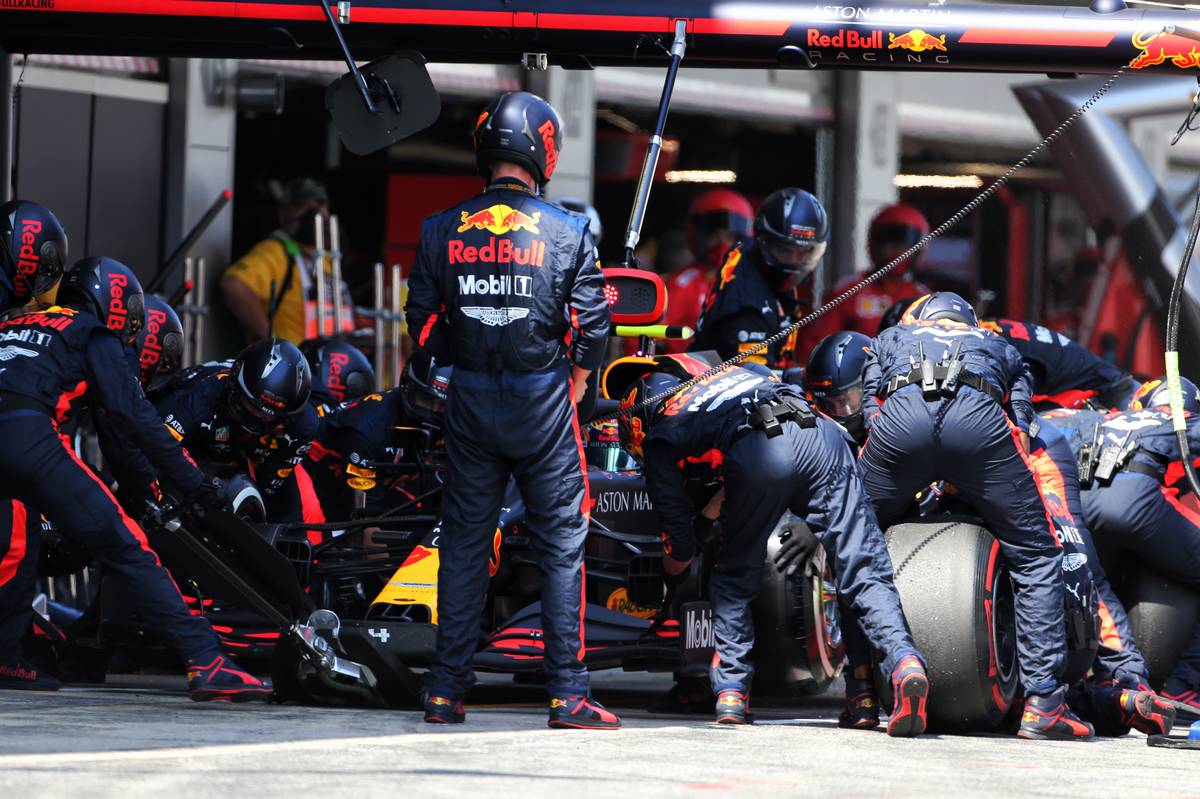 Racing Point waited until lap 28 before calling Stroll in for service, the Canadian returning in eighth place just ahead of a multi-car battle between Haas' Kevin Magnussen, Ocon, Albon and Sainz. The Haas swiftly departed the field to make its own stop, while Sainz had the advantage of a new set of soft tyres that saw him make swift work of both Albon and Ocon to climb up to seventh place. When Perez made his own stop two laps later, he was just able to come out between his team mate and the McLaren.

Outside the top ten, Lando Norris was on a worn set of softs and battling to find a way past Ocon ahead while also defending hard from Leclerc on fresher tyres. Try as he might, the Monegasque couldn't find a way past the McLaren. A few minutes later it was a moot point: an electrical issue caused the Ferrari engine to die without warning and lock up the rear tyres, sending Leclerc into a spin at the final chicane. He was eventually able to re-fire the engine without triggering a safety car, but his day was done and he was forced to retire in pit lane a few minutes later.

With 25 laps remaining and dark clouds now massing on the horizon, Hamilton's lead over Verstappen was almost up to ten seconds with Bottas close behind. Stroll and Perez remained in fourth and fifth ahead of Sainz, Gasly and Norris, with Albon making his second pit stop of the day on lap 41 for a new set of mediums to see him through to the finish, dropping him behind Kvyat and Vettel in 11th place. 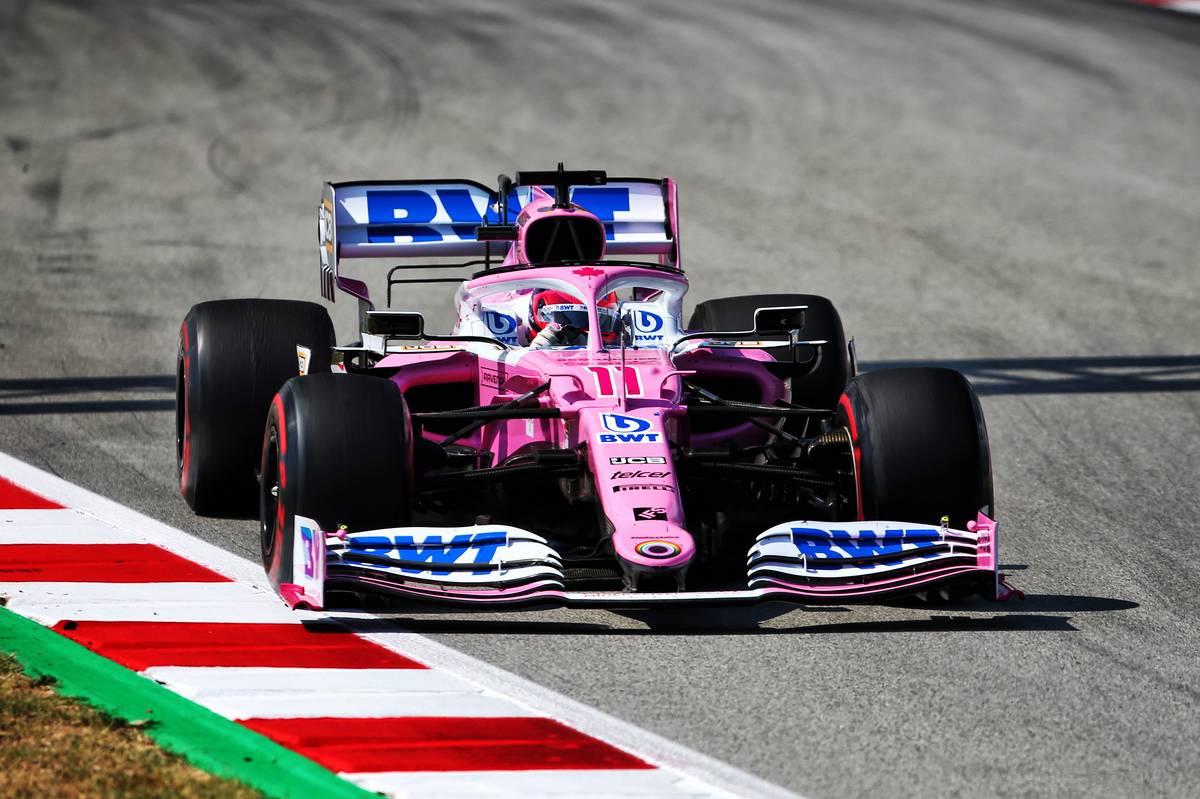 Unhappy with his fading speed, Verstappen likewise pitted again on lap 42, ceding second place to Bottas in the process. Stroll, Gasly and Sainz were also among those to make second pit stops on the next lap, with Kvyat in for service a few minutes later. Lap 49 saw Bottas in for a replacement set of soft tyres, dropping him behind Verstappen but putting him on a nominally faster compound for the final 16 laps of the race. Hamilton made it clear over the team radio that this wasn't a strategy he wanted for himself, and when he made his own final stop a few minutes later he was duly kept on the medium compound to see out the rest of the race.

Although the Mexican had been handed a five second penalty for not observing blue flags, Perez had his sights set on a single-stopper. The same was true for Vettel who now found himself right behind the Racing Point in fifth place. Having already made his second stop, Stroll was now down in sixth followed by Sainz, Albon, Gasly and Norris with Daniel Ricciardo dropping to 11th after running a very long first stint in the Renault.

The soft tyres were not delivering the sort of speed Bottas needed to catch Verstappen for second as the laps counted down. The top three were the only cars still on the lead lap, with Perez and Stroll best of the rest but Perez demoted to fifth in the final classification by his earlier penalty. Vettel's gamble on staying out on a very worn set of softs was proving a tough approach and as well as Stroll he was also easily passed by Sainz, but he was still able to hold on to seventh place ahead of Albon, Gasly and Norris. 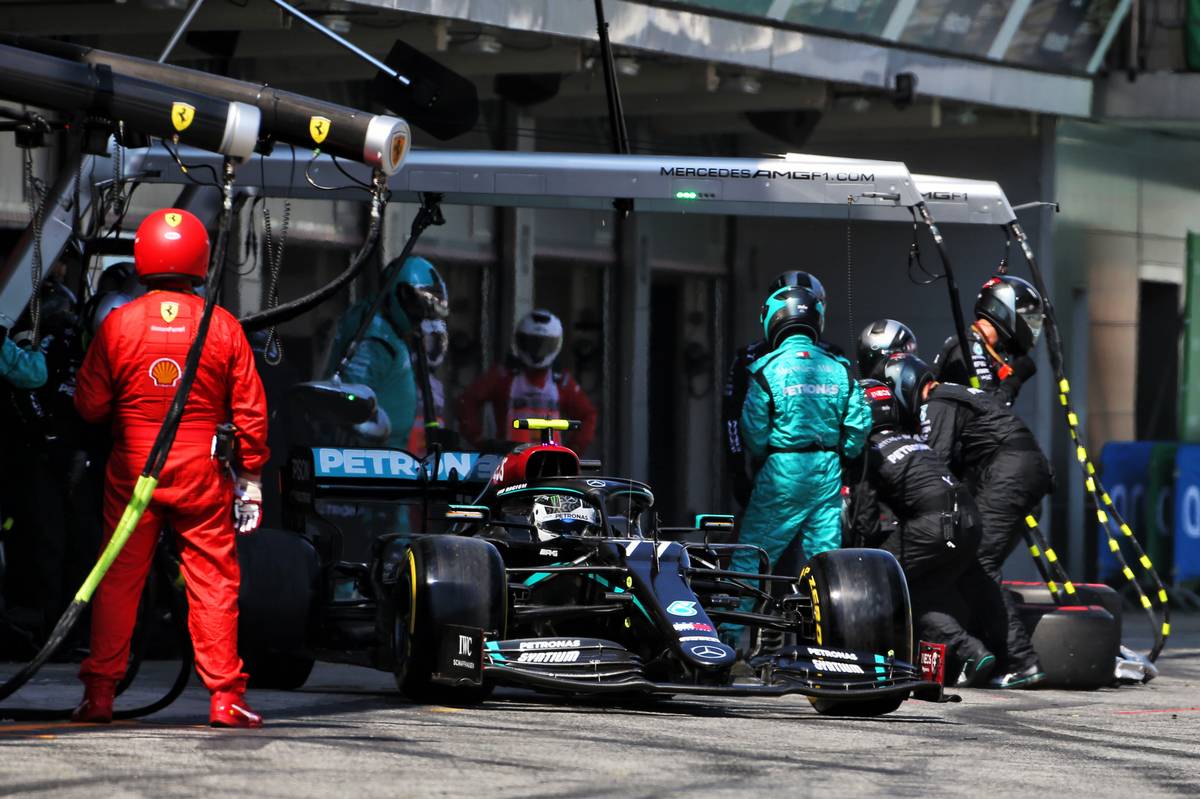 With no further dramas before the chequered flag, Hamilton duly picked up an imperious victory over Verstappen, his 88th Grand Prix win and the 156th time that he's appeared on the podium - thereby wresting another entry in the record books from Michael Schumacher. With his hopes of catching Verstappen for second proving out of reach, Bottas made a late additional pit stop for fresh tyres in what proved to be a successful bid to clinch the extra point on offer for fastest lap of the race.

Hamilton now leads Verstappen by 37 points in the world championship with Bottas a further six points behind. In the constructors standings, Mercedes now has 221 points to Red Bull's 135, with Racing Point back up to third by one point over Mclaren despite their 15 point penalty.