The removal of 'party mode' engine settings for qualifying this week didn't appear to hamper Mercedes in qualifying at Monza, with Lewis Hamilton setting a new track record time of 1:18.887s to pip team mate Valtteri Bottas to pole position by 0.069s.

At an average speed of 263.784km/h, Hamilton's pole is also the fastest lap achieved in Formula 1 history.

McLaren's Carlos Sainz put in a blistering final lap to claim third place on the grid, where he will be joined by Racing Point's Sergio Perez. It means that Max Verstappen was pushed down to fifth place, a relatively lowly outcome for Red Bull.

Charles Leclerc was eliminated at the end of Q2 and will start from 13th place, while Sebastian Vettel suffered the ignominy of missing the cut at the end of the first round of qualifying at Ferrari's home circuit. It's the first time since 1984 that the team has failed to qualify either car in the top ten at Monza.

Saturday was a perfect day for qualifying in Monza, but the Temple of Speed was lacking its faithful followers with the grandstands empty of fans due to the ongoing coronavirus safeguards. Then again, given Ferrari's dismal display at Spa a week ago and their equally unconvincing form in practice this weekend, there was no guarantee that the Tifosi would have anything to cheer about even if they had been able to attend in person. 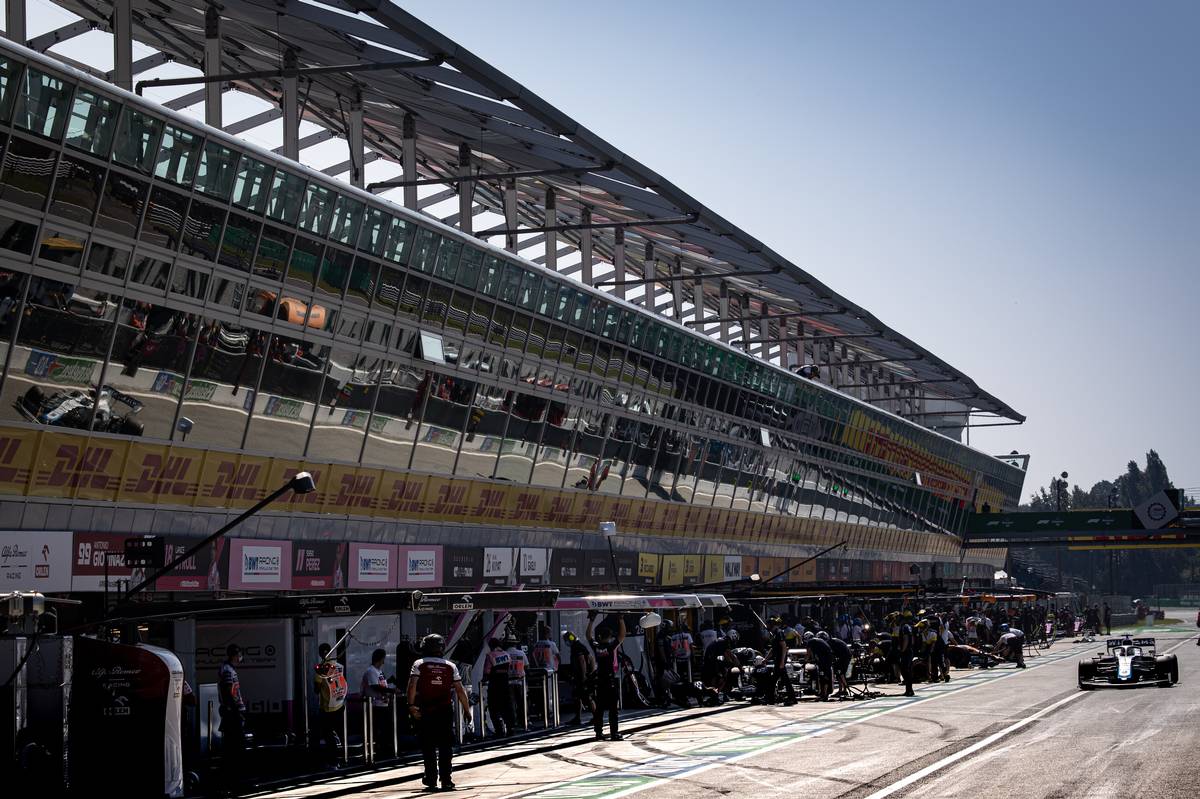 Q1: Hamilton quickest as congestion costs Vettel a shot at avoiding the cut

There was no hanging around when the lights went green at the end of pit lane to announce the start of the session, with the Haas, Alfa Romeo and Williams drivers all queueing to head out. They were soon joined by Ferrari's Charles Leclerc and Sebastian Vettel.

It was Leclerc who claimed first blood, but his time of 1:20.970s was immediately deleted for exceeding track limits at the Parabolica. That left Vettel top with a time of 1:21.151s ahead of Romain Grosjean, George Russell, Antonio Giovinazzi, Kimi Raikkonen and Nicholas Latifi, while Kevin Magnussen's first lap was similarly deleted.

Then it was the turn of Mercedes to shine, Lewis Hamilton changing the game with a time of 1:19.539s which was almost a quarter of a second faster than team mate Valtteri Bottas. Significantly, both were on the medium compound while everyone else was already on the soft. Racing Point's Sergio Perez was third fastest ahead of the two McLarens of Carlos Sainz and Lando Norris, with Red Bull's Max Verstappen pipping Renault's Daniel Ricciardo for sixth.

Verstappen improved to fifth with his next lap to split the McLarens, while Lance Stroll bounced back from having his first lap delated to set the seventh fastest time ahead of AlphaTauri's Pierre Gasly who had been similarly penalised first time out. Leclerc finally registered a time but it was only good enough for 11th, and left Alexander Albon on the bubble of elimination after having his latest time deleted. Meanwhile Vettel was mired deep in the drop zone and with work to do if he was to avoid the cut.

Almost everyone was back in action for one last push - even the two Silver Arrows that had such a dominant grip at the top - but Perez, Sainz and Verstappen all stayed in the garage and avoided the logjam of cars vying for position on their out laps. Despite the new rules on minimum out lap speed, the congestion resulted in Raikkonen's final push being massively compromised by Renault's Esteban Ocon who was himself being held up.

Seriously caught up in the ensuing mêlée was Vettel, who ended up pitting in frustration which meant he finished in 17th place. That put him out of the session along with Grosjean, Giovinazzi, Russell and Latifi, while Albon scraped through by just 0.035s.

Meanwhile Hamilton had marginally improved his time to 1:19.514s to top the round ahead of Bottas, with Perez and Sainz holding on to third and fourth. Pierre Gasly's final run rewarded him with the fifth fastest time ahead of Verstappen, but it was the AlphaTauri pair's decision to go to the front of the pack that was blamed by Vettel for the ensuing "mess" at the end of Q1. The stewards indicated they would be reviewing what happened after the session. 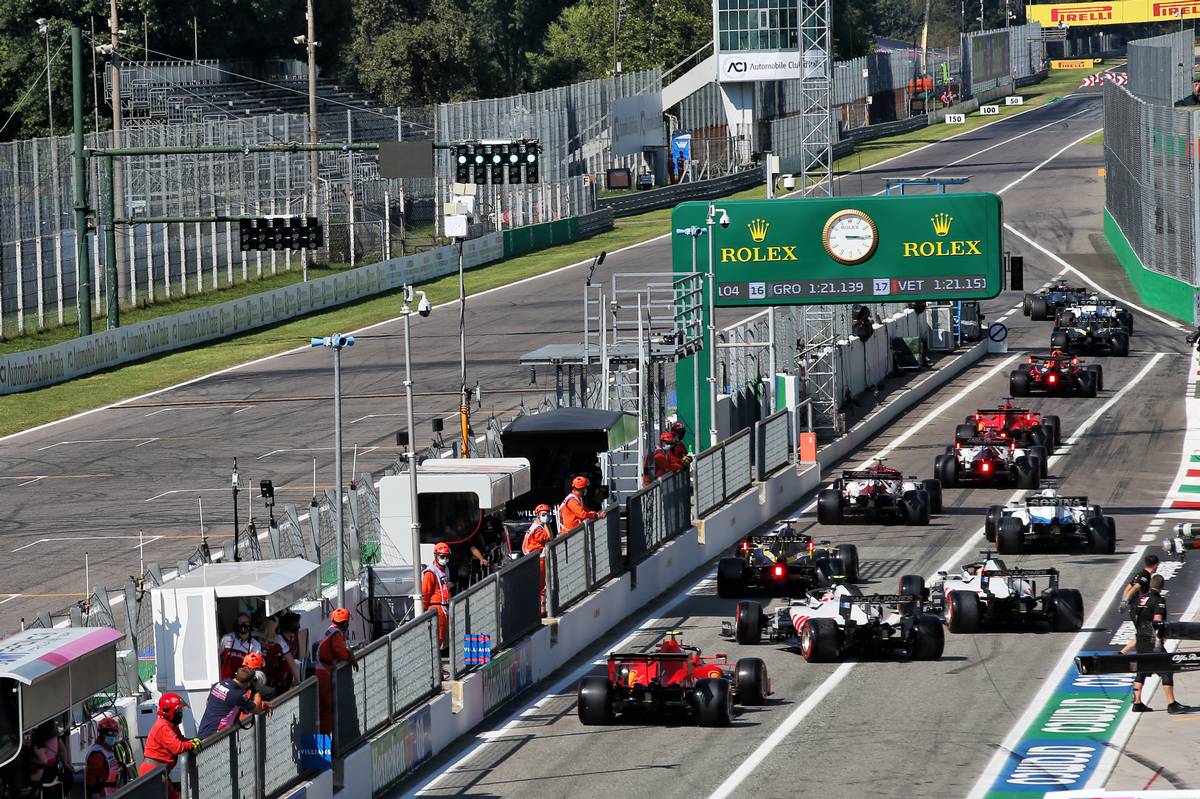 Once again it was a quick start to the second round of qualifying, and this time it was Mercedes leading the way. Despite their searing pace on the mediums in the first round, they had opted to go out on the soft compound signalling that it was their preferred choice for the start of tomorrow's race. This time Hamilton was able to set a time of 1:19.092s, over three tenths clear of Bottas.

Best of the rest were Perez and Sainz, with Verstappen only able to set the fifth fastest time ahead of Gasly, Stroll, Norris, Ricciardo and Albon. Currently in the drop zone after the first runs were Kvyat, Ocon, Leclerc and Magnussen, with Raikkonen slowest having been the last driver to set a time.

After that initial flurry there was a long lull as the teams bided their time before making their last run of Q2, despite the possible risk of ending up enmeshed in further on-track congestion. With three minutes remaining in the session, every car suddenly launched out of their garages as if in a synchronised start to the race itself.

"This is going to get messy," predicted Norris as the cars headed to the line to start their final laps, some seeking a tow while others preferred clear space. Ricciardo opted for the latter but then ran wide at the second gravel and into the gravel, ruining any hopes of improving his time and having to hope his first run was good enough to make it through.

At the front, Bottas found some extra time to take the top spot with a time of 1:18.952s ahead of Hamilton, Sainz, Perez, Verstappen, Gasly, Stroll and Norris. Ricciardo's existing time did indeed prove good enough to maintain ninth place with Albon the last man to make it through.

Kvyat and Ocon were on the other side of the cut - as was Leclerc, last year's Italian GP race winner, who was two tenths off the pace needed to make it into the final top ten pole shoot-out round. It's the first time since 1984 that Ferrari has failed to get either car into the top ten in qualifying at Monza. 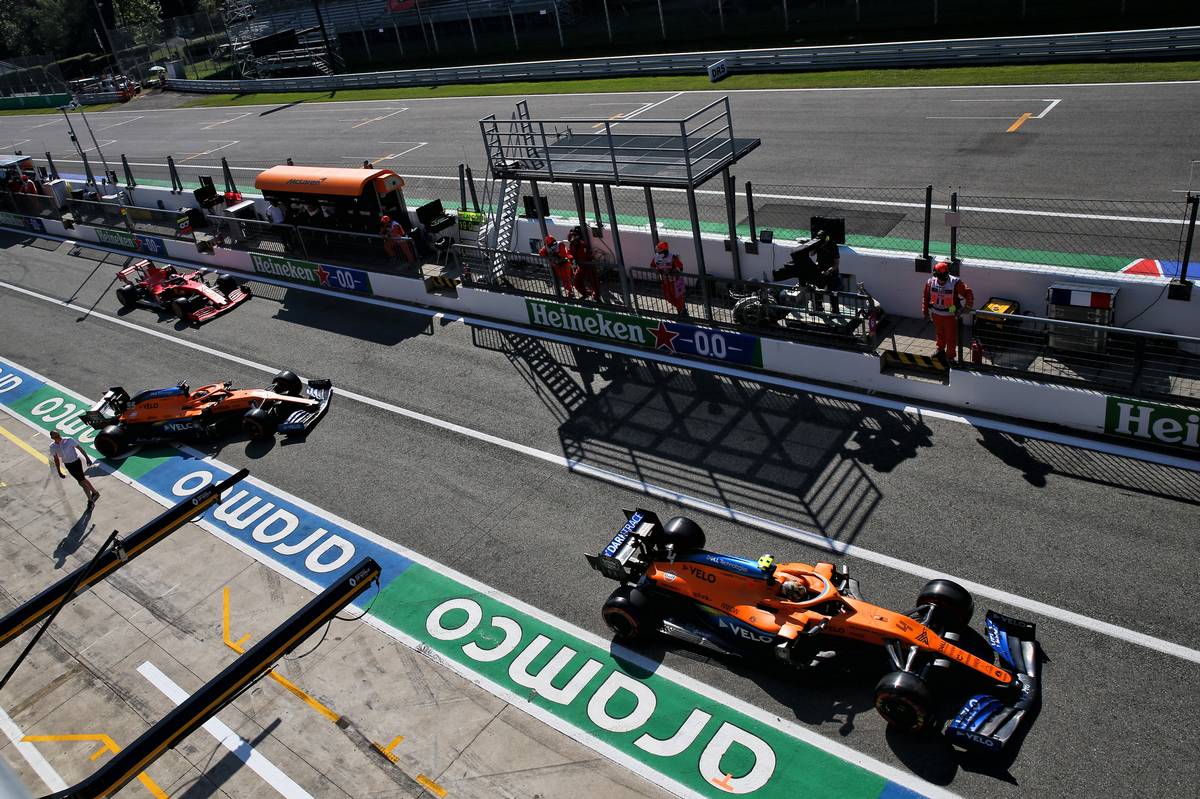 With Ferrari missing in action, the surviving ten drivers set off to decide the matter of the starting order for the top five rows for Sunday's race. Bottas set the first time of Q3 only to be pipped moments later by 0.053 when Hamilton set a new fastest time of 1:19.068s.

Perez was over half a second back in third ahead of Verstappen and the McLaren pairing of Sainz and Norris. Seventh would have gone to Albon if not for having another lap time deleted for exceeding track limits at the Parabolica, leaving Ricciardo in that position ahead of Stroll.

Just when it looked like it would be another long wait for the cars to come out for their last-minute final runs, Mercedes surprised everyone by firing up and returning to action with over five minutes remaining on the clock in an effort to avoid the congestion which was becoming somewhat farcical for all concerned. Inevitably the rest of the cars then also scrambled to get out in response.

Bottas briefly went top, only to be denied once again by Hamilton's 1:18.887s which was a slender 0.069s quicker than the Finn, his seventh Italian GP pole and a new track record for Monza. A phenomenal run by Sainz put the McLaren into third place albeit eight tenths off the pole time, with Perez joining the Spaniard on the second row.

It was a surprise to see Verstappen pushed down to fifth on the grid followed by Norris, Ricciardo and Stroll. Albon finally got in a legal lap to claim ninth, leaving Gasly as the slowest man in Q3 as the chequered flag fell. 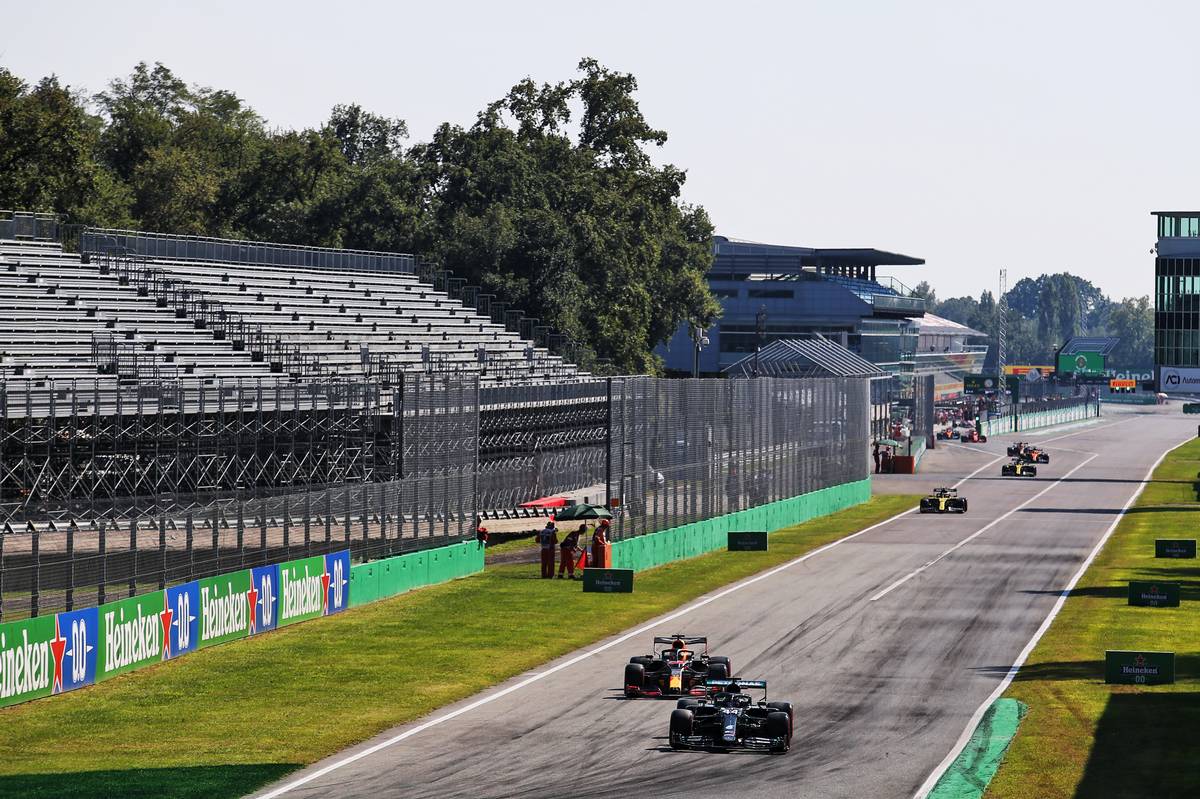