Pierre Gasly took a shock maiden victory for AlphaTauri in the 2020 Italian Grand Prix over McLaren's Carlos Sainz and Racing Point's Lance Stroll in one of the biggest upset results in recent years.

A seemingly easy victory for Lewis Hamilton was lost when the Mercedes was penalised for making a stop while pit lane was closed under a safety car. His team mate Valtteri Bottas had already suffered a poor start and handling problems throughout the race which saw him finish in fifth behind Lando Norris.

Red Bull's Max Verstappen suffered a technical retirement with an engine issue, and it was a nightmare home race for Ferrari with Sebastian Vettel the victim of a dramatic brake failure and Charles Leclerc having a high-speed accident in the Parabolica. 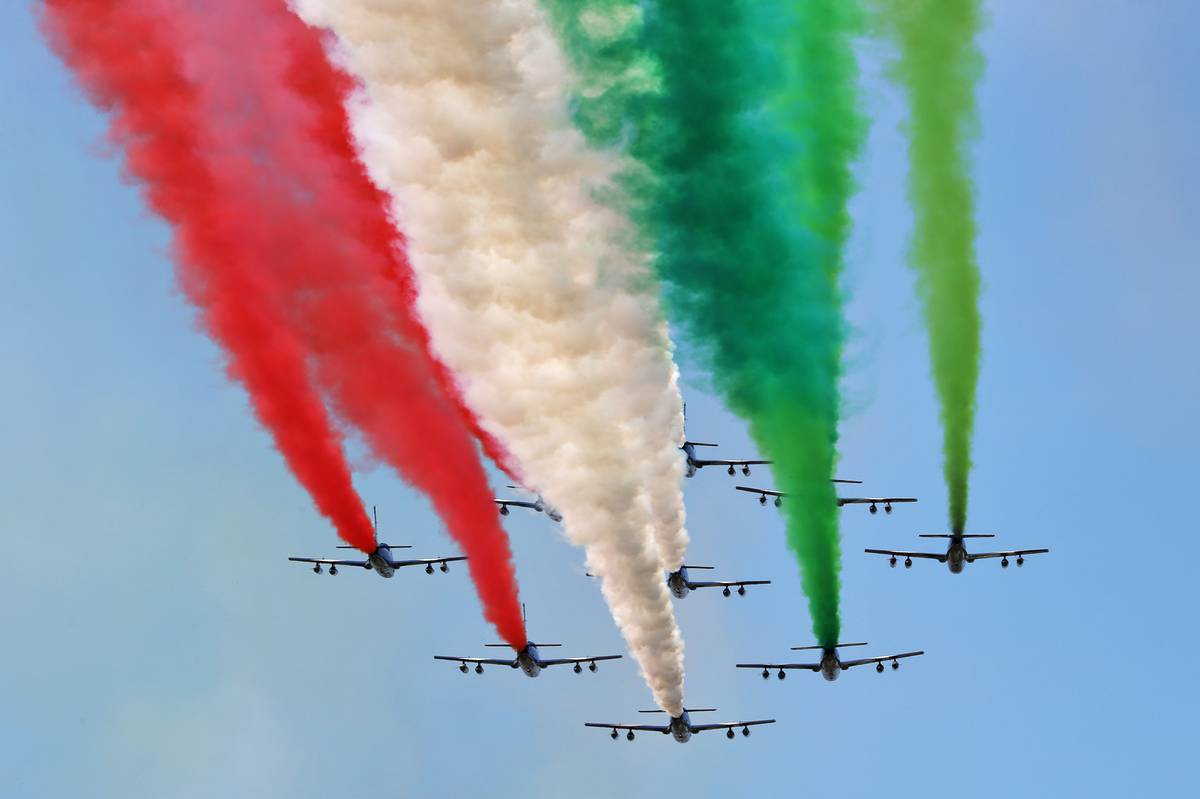 The Temple of Speed was turning on the style on Sunday, the Italian air force performing fly-bys across clear blue skies as the sun heated the cars and drivers waiting on the grid to get the race underway. Lewis Hamilton had once again pipped team mate Valtteri Bottas to pole, but behind the inevitable Mercedes front row there was an interesting mix of drivers with Carlos Sainz (McLaren) and Sergio Perez (Racing Point) having out-qualified Red Bull's Max Verstappen on Saturday. And could Daniel Ricciardo in the Renault pull off a surprise from seventh on the grid in the Renault?

When the lights went out, Lewis Hamilton jumped away with the perfect start, but Bottas wasn't able to match him and by the first turn he had been ambushed by Sainz. The problem was clearly more than a simple poor start, as he then lost further places to Lando Norris and then to Perez and Ricciardo in quick succession. It dropped him to sixth ahead of Verstappen, who was himself struggling to stay ahead of Lance Stroll. Unusually he wasn't able to stay ahead, but a lap later he was able to regain the position with a pass on the Racing Point at the first chicane.

Meanwhile his Red Bull team mate Alex Albon was having an even more torrid time of it, having dropped to 15th place after being involved in two incidents on the opening laps. The first was contact with Pierre Gasly in the sister AlphaTauri on lap 1, which the stewards 'noted' but decided warranted no further action; and there was also a separate incident on lap 2 with Haas' Romain Grosjean, for which Albon was penalised by the race stewards and ordered to serve a five second stop and go penalty when he made his pit stop. 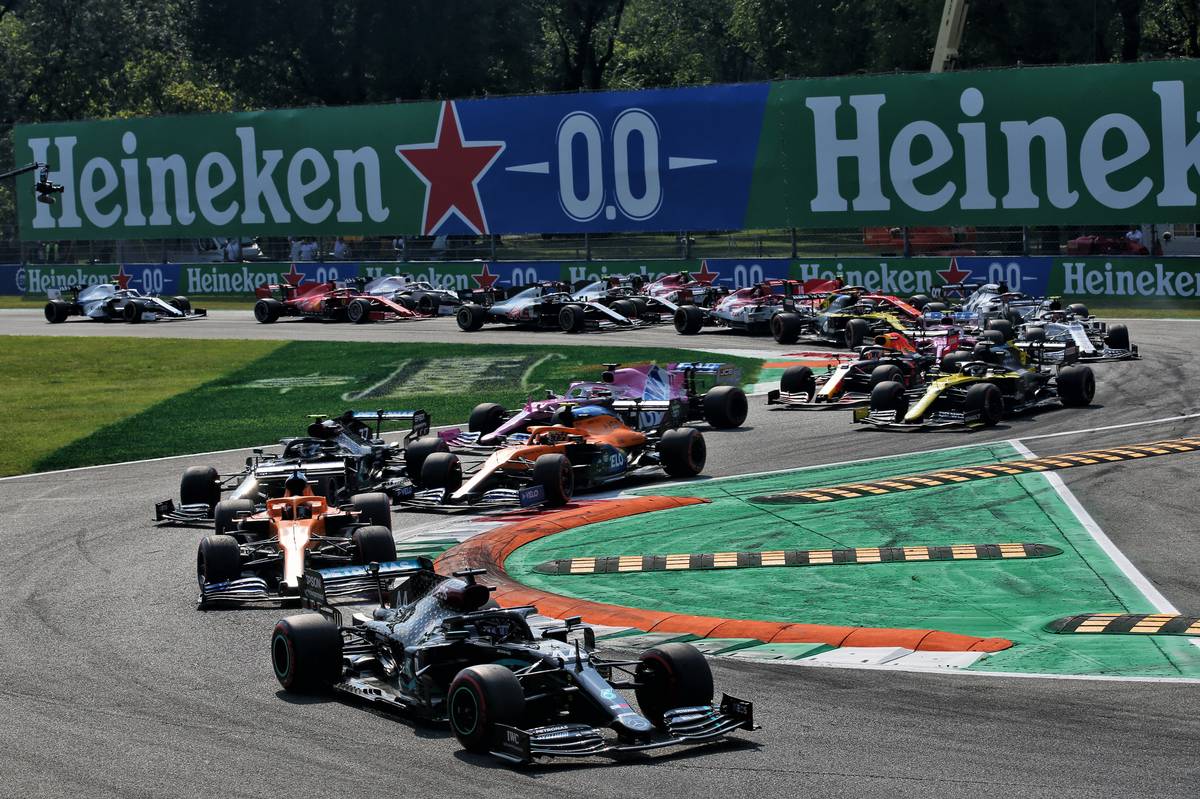 Four laps in and Hamilton had a comfortable 2.5s lead over the two McLarens, while Bottas had stabilised his position in sixth as the team confirmed there was no puncture as initially feared. Even so, the Finn remained concerned about understeer. Elsewhere, Sebastian Vettel also had an issue with the team advising him of problems with the rear brakes - and on lap 6 the brake disc duly exploded, leaving the Ferrari unable to brake into the first chicane and having to resort to ploughing through the polystyrene markers. Vettel managed to bring the car back to pit lane to retire without triggering a safety car.

Everyone in the top ten had started the race on soft tyres, and despite the higher temperatures it didn't seem as though anyone was suffering from undue tyre degradation. The highest placed car on a different compound was Daniil Kvyat in 11th who had opted for the hard tyre and seemed able to find sufficient pace to stay ahead of Kimi Raikkonen on mediums, with Charles Leclerc on softs in 13th place. Not only was he unable to do anything to improve his lot, he couldn't prevent the recovering Albon passing him for position on lap 17, after which a resigned Leclerc opted to pit early for a new set of hard tyres.

The hot weather was continuing to cause headaches for Bottas, with Mercedes worried about the W11 overheating in traffic as he continued to run in sixth between Ricciardo and Verstappen. Bottas complained that he was unable to work with the engine settings required to manage the problem, and that the situation was a 'joke'. A safety car interval would have been a Godsend to the Finn at this point. 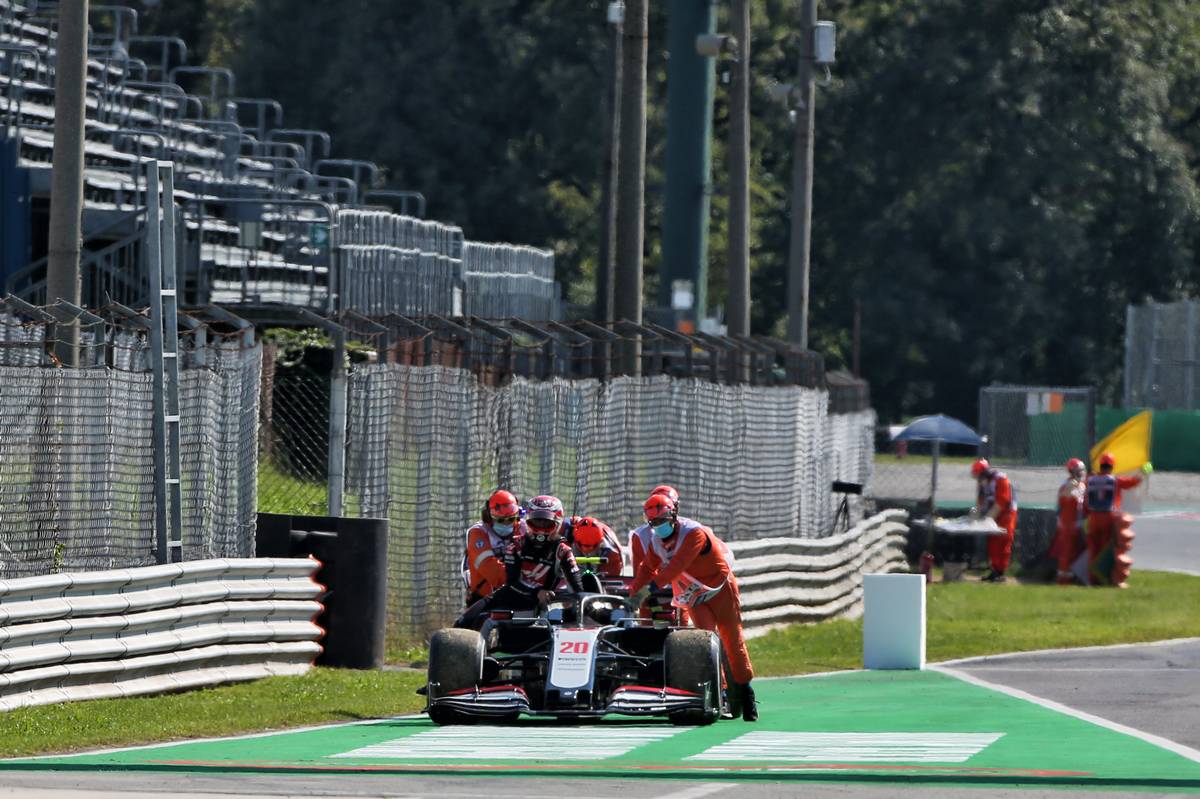 And on lap 20, that's exactly what materialised after Kevin Magnussen pulled over to the side of the track within sight of the pit lane, the driver reporting "something broke" on the Haas - perhaps related to contact on the opening lap that had forced him to pit for repairs and a new front wing. According to standard practice, Hamilton used the opportunity to immediately dive into pit lane, as did Alfa Romeo's Antonio Giovinazzi. But no one else did, and for good reason: the pit lane had been closed at the same moment the safety car had been deployed due to the proximity of the parked Haas to pit entry.

Once the Haas was removed, the rest of the field was able to came in for their pit stops with Sainz and Norris leading the way. However Stroll stayed out, while a number of cars had pitted earlier including Gasly, Giovinazzi, Kimi Raikkonen, Charles Leclerc and Nicholas Latifi, all of whom now gained positions and took the restart ahead of Sainz and Norris in eighth and ninth respectively.

Leclerc was able to make up positions with rapid passes on both Alfa Romeos putting him up to fourth place. Could he turn things around for Ferrari at his home race? Unfortunately not. On lap 24, the backend of the Ferrari stepped out as it sped through the Parabolica, and Leclerc was unable to save the car from flying off into the gravel and a heavy impact with the tyre wall. Leclerc himself was fine and soon sprinting back to the pit lane, but the race still had to be red flagged because of the damage to the tyre wall and the work needed to extricate the embedded Ferrari. 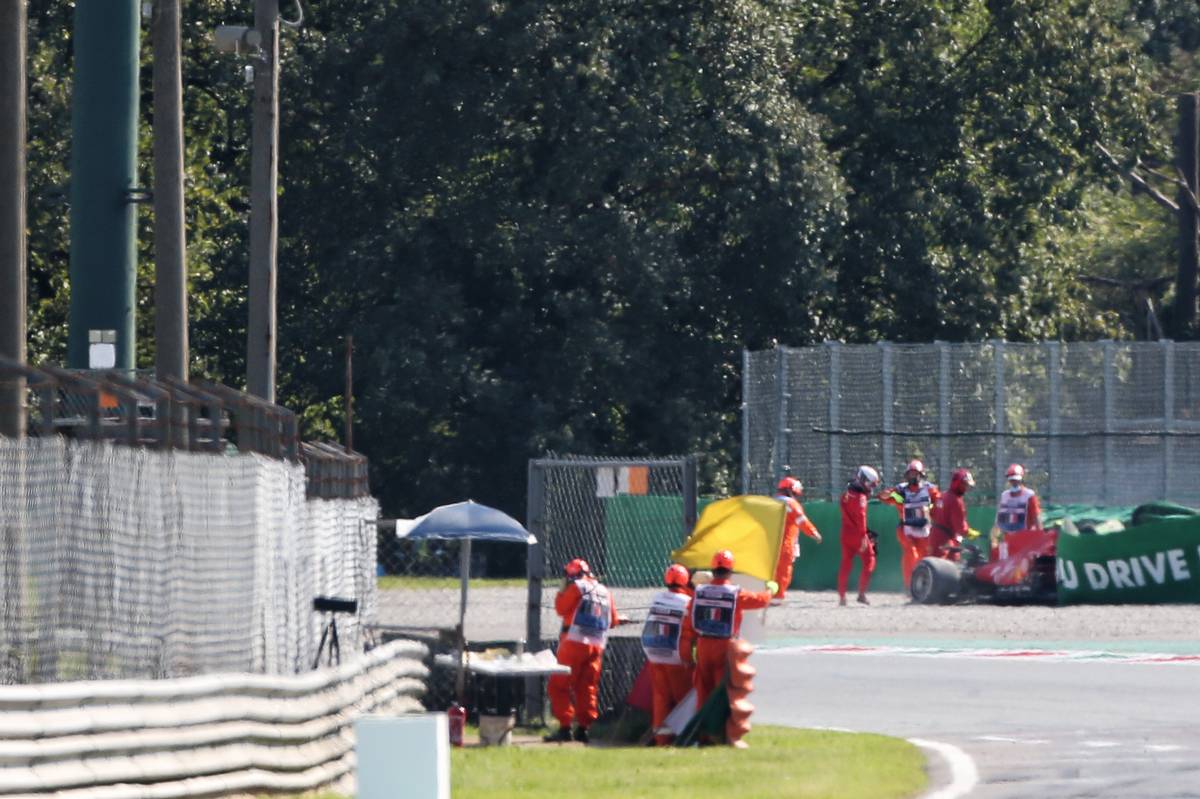 The cars lined up in pit lane with Hamilton still at the head, but behind the scenes a furious row was raging about whether or not Hamilton and Giovinazzi would be penalised for coming in while the pit lane was closed. Mercedes argued that there had been no red light at pit entry, but were told that earlier signs on the track had shown a red cross conveying the information. Ultimately Hamilton was handed a ten-second stop/go penalty, as was Giovinazzi.

In accordance with the recently revised rules, the race resumed with a standing start for the first time. Hamilton was at the front pending his penalty, with Stroll in second having been allowed to get a 'free' change of tyres under the red flag. While Hamilton repeated his earlier perfect start, Stroll echoed Bottas' problematic getaway and lost positions even before locking up and overshooting the turn 4 chicane. A deeply unhappy Hamilton made his penalty stop at the end of the lap, handing the lead to Gasly ahead of Raikkonen, with Giovinazzi momentarily in third ahead of Sainz, and Stroll slotting back in ahead of Norris.

Having served his penalty, Hamilton came back out at the back of the field and 30s behind the race leader, with it all to do. A lap later it was Giovinazzi's turn to perform his costly-stop and go; but an even bigger surprise came moments later when Verstappen also limped into pit lane from 14th place with an engine issue detected that forced Red bull to retire the car: a golden opportunity for them to cut the gap to the runaway championship leaders had slipped away.

Sainz pulled off a brilliant do-or-die move on Raikkonen at the first chicane on lap 34 to pick up second place, and the Spaniard now set his sights on eating into Gasly's four second lead. A lap later, Raikkonen lost a further place as Stroll used DRS into the second chicane to pass the Alfa and moments later the former champion was also dispatched by Norris, Bottas and Ricciardo in quick succession. 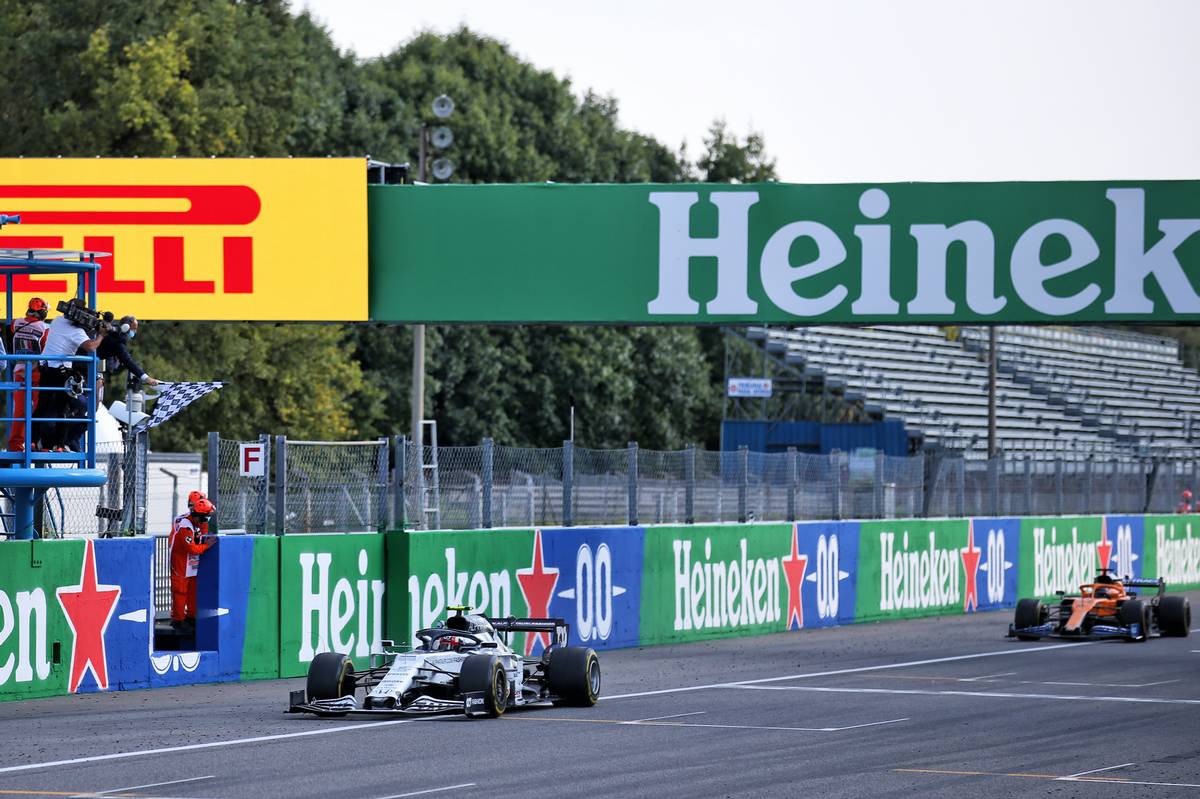 While Raikkonen was in reverse, Hamilton was gaining ground. By lap 40 he had finally caught up with the rest of the pack, but the straight line speed of the Mercedes wasn't enough to allow him to find a way past Albon until he was presented with a gift wrapped opportunity when the Red Bull out-braked itself and ran over the first chicane. After that he sailed past the 'draggy' Williams of George Russell and soon picked off Romain Grosjean in the Haas, but like Bottas before him he was also having to manage engine heating issues caused by running in traffic. After picking off Latifi, he then passed Raikkonen at Ascari on lap 47 to put himself back into the points, with Perez next up the road.

With the laps running out, Sainz had still not caught up with Gasly. At the start of the final lap he was clamped to the back of the AlphaTauri, but it was too late and Gasly made it to the finish line to claim victory in the Italian Grand Prix, with Sainz and Stroll joining him on the most unexpected podium line-up in recent years.

Norris just missed out in fourth ahead of Bottas and Ricciardo, with Hamilton ending his run in seventh place having dispatched Ocon, Kvyat and Perez in the closing laps. Latifi just missed out on scoring maiden points for Williams in their final race under family ownership in 11th, follow by Grosjean, Raikkonen, Russell, Albon and Giovinazzi.