Pirelli has prepared for this week's Eifel Grand Prix by treating the Nürburgring as an all-new venue, the tyre supplier expecting a race "with many variables" on Sunday.

Formula 1's last visit to the Nürburgring dates back to 2013 and while Pirelli was already the sport's exclusive tyre supplier back then, the company isn't relying much on its past experience at the track, especially s F1's current generation of hybrid cars has never raced at the circuit.

"The Nürburgring is practically an all-new venue for us, so we'll be treating it as if we are coming there for the first time in Formula 1, although of course we remember it well and we have raced there many times in other championships," explained Pirelli F1 boss Mario Isola.

Pirelli will bring to Germany the three compounds right in the middle of its range to deal with a wide variety of circumstances at a track that also happens to be particularly demanding on tyres.

"In order to ensure we have everything covered, we're bringing the three tyres in the middle of our range, which are also well-suited to the varied demands of this track," added Isola.

"Probably the biggest factor will be the weather, with low temperatures and rain quite likely at this time of year.

"As a result, the teams might have to deal with some quite unusual circumstances, on a track that they aren't particularly familiar with." 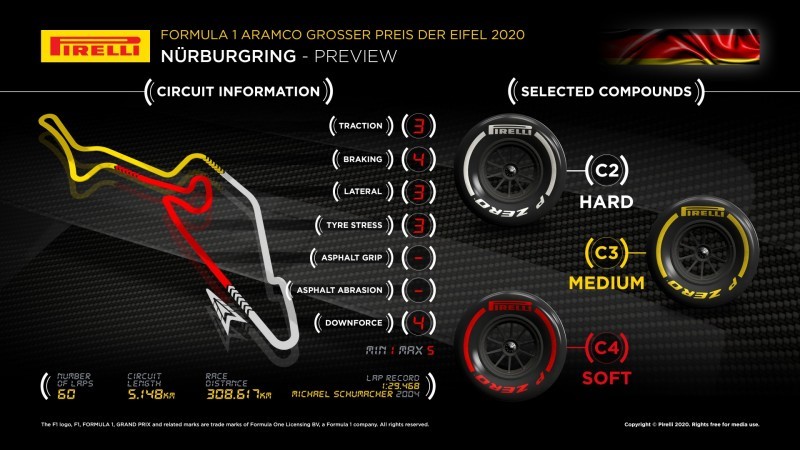 Current forecasts are calling for chilly temperatures and a wet few days, but sub-10 degrees centigrade ambient can potentially cause 'cold cracks' in the tyres, which means that they need to be carefully looked after while being fitted in the fitting area and then stored by the teams.

"So this is a race that is likely to favour drivers and teams who are able to get to grips with new situations quickly," warns Isola.

"I think it's fair to say that we're set for a race with many variables, where we may even see all five types of tyre that we bring to the grand prix used over the course of the weekend."

Grosjean: I should have won at the Nürburgring in 2013

Hamilton not as great as Fangio and Clark - Stewart