Wolff's role with Mercedes from 2021 has been the subject of much speculation, part of it fueled by the Austrian himself who admitted earlier this year that he was considering taking a step back from the day-to-day running of the manufacturer's operations in F1 after seven years at the helm.

Wolff, who remains a 30% shareholder of the Mercedes team, has already ruled out a non-executive position with the Black Arrows squad, a function filled by Niki Lauda until the F1 legend's passing in May 2019.

But regardless of Wolff's future responsibilities, Källenius insists the 48-year-old will likely remain with Mercedes.

"As far as our partnership [with Wolff] is concerned, we work very closely together, I am very certain that we will continue that partnership going forward," the Daimler chairman told Channel 4.

The Swedish executive also confirmed Mercedes' commitment to F1, although Källenius stressed that costs of competing at the pinnacle of motorsport would be slashed in the future.

"We have as little reason to step out of Formula One as Bayern Munich has to step out of football," Källenius said during a virtual roundtable discussion with journalists this week.

"The net financial impact will be halved in the next three years. We have an even more aggressive cost reduction target in Formula One than for the rest of the company." 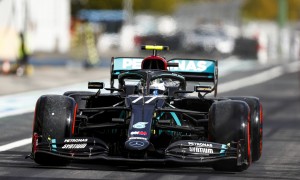