Daniel Ricciardo says he spared a thought  for Renault teammate Esteban Ocon after edging the Frenchman by just 0.02s to qualify sixth for Sunday's Bahrain GP.

There had been little between the two drivers in FP3 and the minuscule spread was even tighter in Saturday evening's shootout at Sakhir.

"They're the ones that really hurt," conceded Ricciardo. "I don't always sympathize with my opponents but I felt a little bad for Esteban.

"Obviously, the qualie record is not really in his favor this year and when you get one like that, I'm sure he's thinking, what do I have to do?

"But in saying that - now it's the competitor coming out - he had two sets in Q3," noted the Aussie. "I actually used both of mine in Q1.

"I struggled with the first set, so had to use it again which left with just one new set in Q3, so made it a little bit harder for myself."

Ocon bowed to his teammate's narrow edge but vowed to keep on giving him a run for his money.

"Daniel has the edge on me this year, he has been fast in quali and he's done a tremendous job," Ocon commented.

"But he's blessed a bit in a way when it comes to being that close altogether. It's been a couple of times that it's always in his favour, but up to me to do the next two.

"Overall an awesome session, it's awesome for the team. We have two cars in the top ten and not the other rivals so that's the main thing." 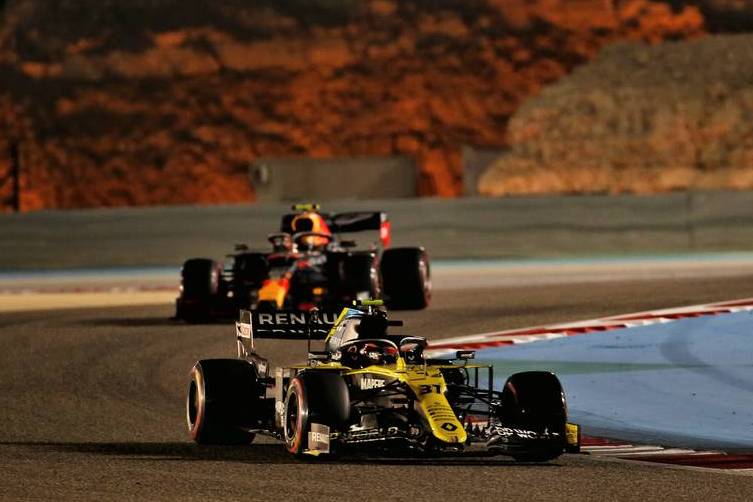 While Renault did indeed position both of its cars among the top ten, contrary to midfield adversaries Racing Point and McLaren, Sergio Perez will line up his pink racer in fifth position just ahead of Ricciardo and Ocon on Sunday's grid.

However, Ricciardo's wicked game plan is for himself and Ocon to gang up on the Racing Point driver on the run down to the first corner.

"Obviously Perez just got us, but he's there," Ricciardo said. "And obviously with Esteban right there as well… Yeah, the perfect picture as we both get him into Turn 1 tomorrow and hold firm and get some points back that we missed a couple weeks ago.

"His [Perez] long runs are good, he's always been good at managing tyres.

"We really have to put pressure on him and in a way try and bully him at the start and really kind of force his strategy a little bit. If he gets off in clean air, we will be hard to beat."

Ocon says Renault is in a good spot but predicts a raging battle behind the frontrunners.

"That’s what we wanted, to get both cars in the top-ten, to have a good starting position," he said.

"We have the right tyres as well, we are starting on the medium so it's not like we just gave up on something for the race.

"Overall, it's going to be tight because it's going to high-deg [degradation], it's an easy track to overtake so even if we are in the top-ten we'll have to fight hard tomorrow."