F1 has announced that it has dropped the diversity rainbow branding associated with its #WeRaceAsOne movement as the sport sets new priorities for its initiative.

F1 launched the WeRaceAsOne initiative at the start of the 2020 season to promote the fight against COVID-19 and racial inequality.

The rainbow branding - used internationally in the recent crisis to bring communities together - featured prominently on all the teams' car, on trackside signage and on F1's communication material. But it will no longer appear on the #WeRaceAsOne platform this season.

"This season the rainbow will no longer feature alongside the #WeRaceAsOne platform," F1 said in a statement released on Wednesday.

"While the COVID-19 pandemic is still an ongoing battle, we are focussing the platform on the three core pillars of our Environment, Social and Corporate Governance strategy.

"Those pillars are sustainability, diversity and inclusion, and community. These areas are a priority for the sport where progress has already been made but with more commitments to be delivered in coming months and years." 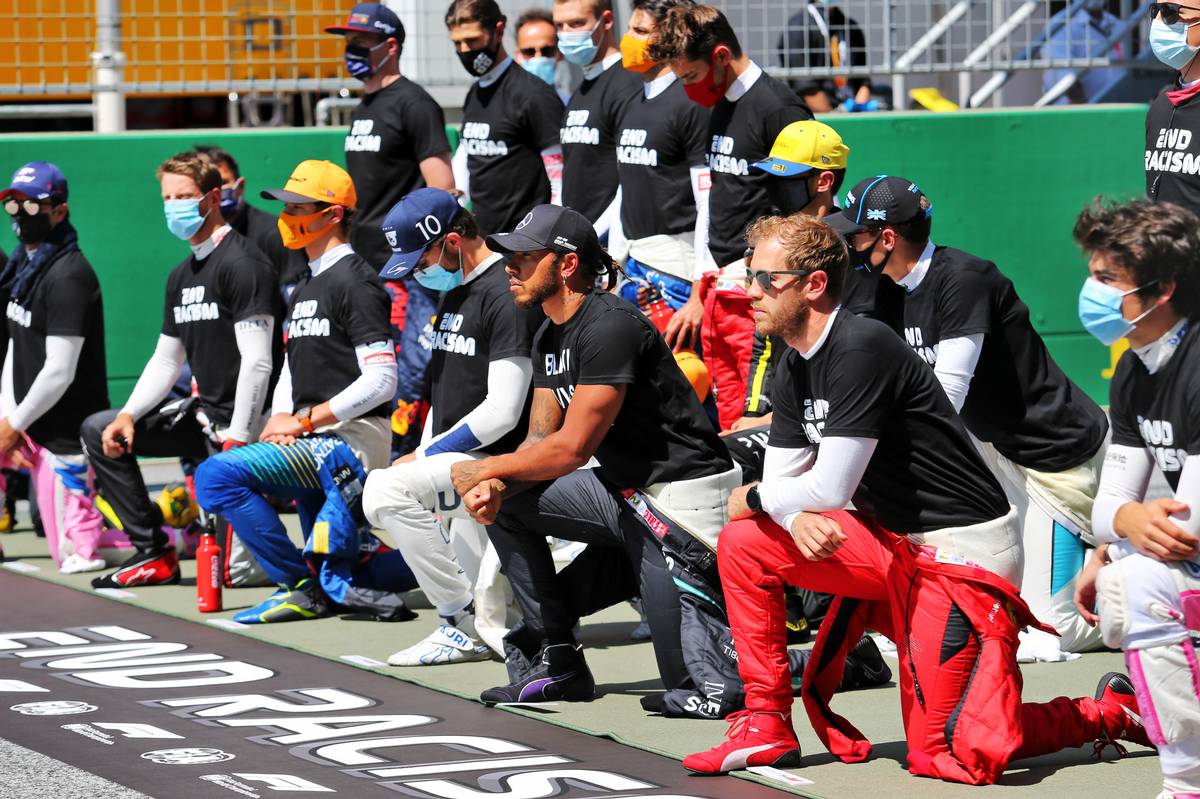 Last year, F1 organized a moment before each race during which drivers stood united against racism, with part of the group opting to take a knee.

The pre-race ceremonial will be maintained this season, albeit in a form that has yet to be discussed with F1's drivers.

"We plan to include a moment before the start of each race this season to show our united support for important issues and will be discussing this with the drivers and the teams ahead of the start of the season," F1 said.

F1 says it hopes to create "a clear path towards sustainably fuelled hybrid engines", while also reducing the amount of single-use plastics in the paddock.

The sport also plans to offer internships and apprenticeships for under-represented groups "to provide access to a promising career in the sport" as well as “funding scholarships for talented engineering students from diverse and underprivileged backgrounds with work experience opportunities at F1 and the Teams during their studies."

F1 will also help grow awareness for the all-female WSeries that will feature on Grand Prix racing's support bill at eight events this season.

"Our We Race As One platform was very effective at raising the awareness of socially important issues and our steadfast commitment to make a positive change," said new F1 president and CEO Stefano Domenicali.

"We are very proud of it and the teams have embraced it fully. While our commitment through words to tackling issues like sustainability and diversity in our sport are important, it is our actions that we will be judged on.

"We have already made good progress on our sustainability plans and you will see strong actions being executed this year across all three of our WRAO pillars. We know we must continue to move forward on these issues and the whole sport is united in doing this in the months and years ahead."