Formula 1 has revealed the layout for this year's inaugural Saudi Arabian Grand Prix, a 6.175km circuit located in Jeddah which the sport has labeled as "the fastest street track" in F1 history.

Saudi Arabia is set to host the 22nd and penultimate round of the 2021 F1 world championship on December 5, with the event enjoying an evening start and taking place under the floodlights.

Designed by F1's resident architect Herman Tilke with significant input from the Formula 1 Motorsport team led by Ross Brawn, the track will use existing roads in Jeddah's Corniche area along the Red Sea but will enjoy a fast-flowing profile.

Comprised of 27 corners, the track will unfold over 6.175km, a length second only to Spa-Francorchamps, and include three DRS zones, with lap times expected to average approximately 250km/h. 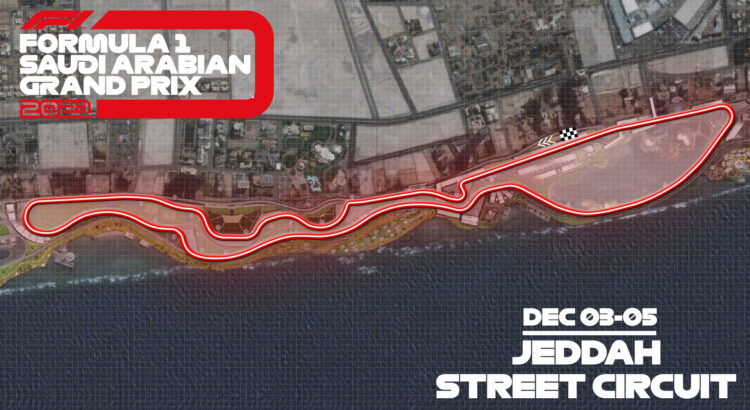 While predicted to be fast, an overview of the layout suggest that overtaking opportunities could be few and far between.

However, Brawn describes Jeddah's "incredible" street circuit as a venue that will "bring out the best of a modern street circuit".

"It’s always very exciting to release the details of a new circuit and the Jeddah Street Circuit is no exception," Brawn said.

"We have worked closely with the team at Tilke and with the promoter to ensure we have a track that provides exciting wheel to wheel racing for our fans and challenges all of the drivers.

"The design brings out the best of a modern street circuit but also has fast paced free flowing areas that will create fast speeds and overtaking opportunities.

"The setting is incredible, on the Red Sea, and we can’t wait to see the cars on track in December."

"We are looking forward to welcoming motorsport fans to Saudi Arabia. Next December will be a huge moment, when we host the biggest event in Motorsports (Formula 1).

"Even though this is the first time we will host a Formula 1 Grand Prix, delivering such important international events is further confirmation of the Kingdom’s ability to manage and organise these events to the highest standards for our fans and growing young population."