Mercedes' Lewis Hamilton held on to claim pole position for the 2021 Emilia Romagna Grand Prix after a close fought and highly entertaining qualifying session at Imola on Saturday afternoon.

Sergio Perez won the battle of the Red Bull team mates to take the shotgun spot alongside Hamilton on the front row, with Max Verstappen having to settle for third place on the grid alongside Ferrari's Charles Leclerc after an untidy final run.

Lando Norris looked set for his best qualifying yet, with second i his sights until his final lap time was deleted for running wide at turn 9. Valtteri Bottas had a disappointing final round and ended up in eighth, while AlphaTauri rookie Yuki Tsunoda had earlier triggered a red flag when he spun off in Q1 and will have start from the back of the grid.

Conditions in Imola were dry and bright, although a build up of cloud had taken away the sunshine that had been a feature of final practice two hours earlier. As a result, temperatures remained a cool 12C as the cars headed out on track for the first round of qualifying. 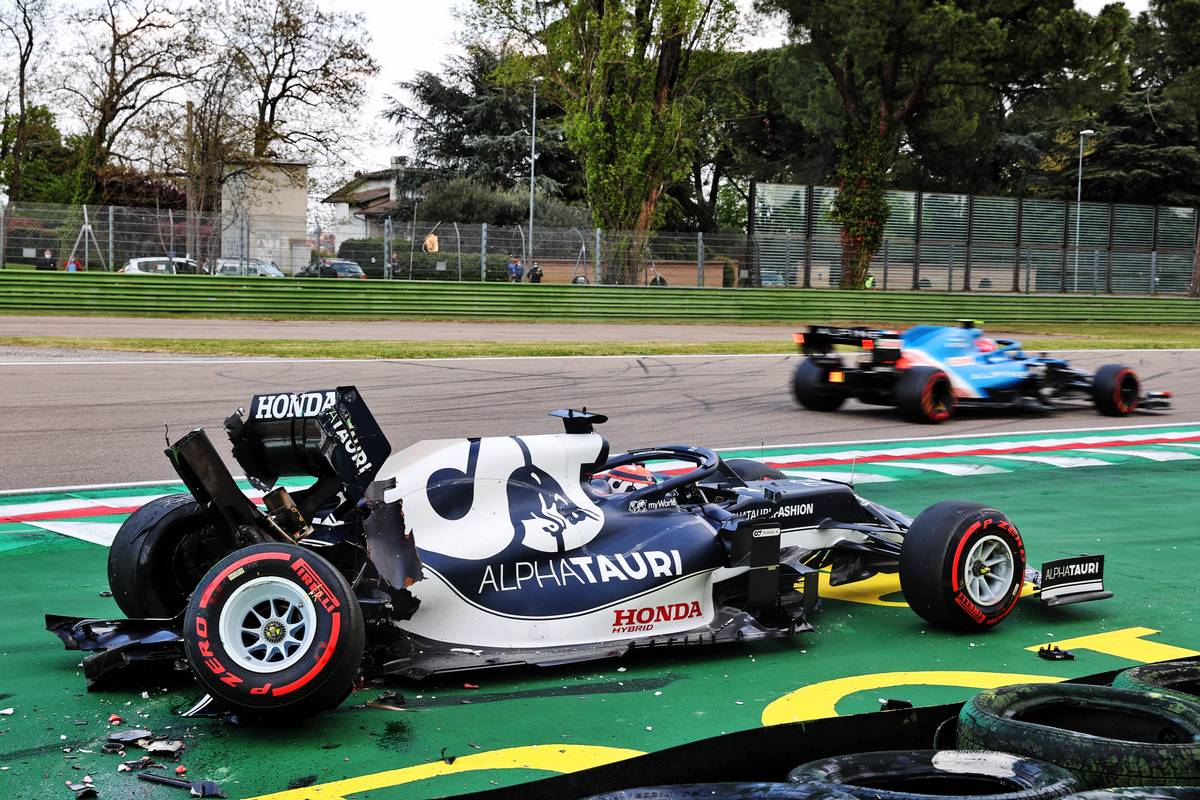 Q1: Mercedes fastest, Tsunoda crashes as Russell and Latifi make it through

Leading the way was Haas' new recruit Mick Schumacher who was first to emerge from pit lane and take to the track on soft tyres, followed by his team mate and fellow rookie Nikita Mazepin. Schumacher's initial time was 1:16.806s with Mazepin exactly a second slower. Once their times were on the board, the rest of the teams leapt into life and headed out for their own initial forays.

Lance Stroll soon went top for Aston Martin with a 1:16.082s, but his team mate Sebastian Vettel had to abort his own first flying lap after oversteering wide. Seconds later, the session was red flagged after Yuki Tsunoda swapped ends and went off into the barriers at Variante Alta, leaving his AlphaTauri with a severely crumpled backend.

Only five cars had completed laps by the time the session was suspended with 12 minutes left on the clock, meaning that the pressure was on the rest of the drivers when the track went green again. Sergio Perez was first out and briefly went top before his own lap was deleted and his place at the top taken by Charles Leclerc. But the Ferrari's time at the top proved equally brief before first Max Verstappen and then Valtteri Bottas went quickest, the latter with a time of 1:14.672s.

Lewis Hamilton couldn't match his team mate's effort and he slotted into third behind Verstappen, which then became fourth when McLaren's Lando Norris shot into second place. Hamilton's next run was quicker and successfully established a familiar Mercedes 1-2 at the front, while the latest run for Perez this time stayed within the white lines and duly enabled the Mexican to take up residence in fifth between Verstappen and Leclerc.

As the session took a brief mid-point pause in pit lane, the drop zone was provisionally packed with both Haas drivers and the two Williams cars of George Russell and Nicholas Latifi. Russell's next run was good enough to take him to 14th place and push Kimi Raikkonen into potential elimination in his stead, but it was his team mate Latifi who pulled off something really special to jump up to 12th.

Raikkonen improved slightly to nip in just ahead of Russell, but the Briton had one more run left and just managed to claw his way back to safety. That pushed Raikkonen into the bottom five where he was now joined by his Alfa Romeo team mate Antonio Giovinazzi who had not been able to start his final run in time. The man left on the bubble and lucky to squeeze through to Q2 was Alpine's Fernando Alonso. 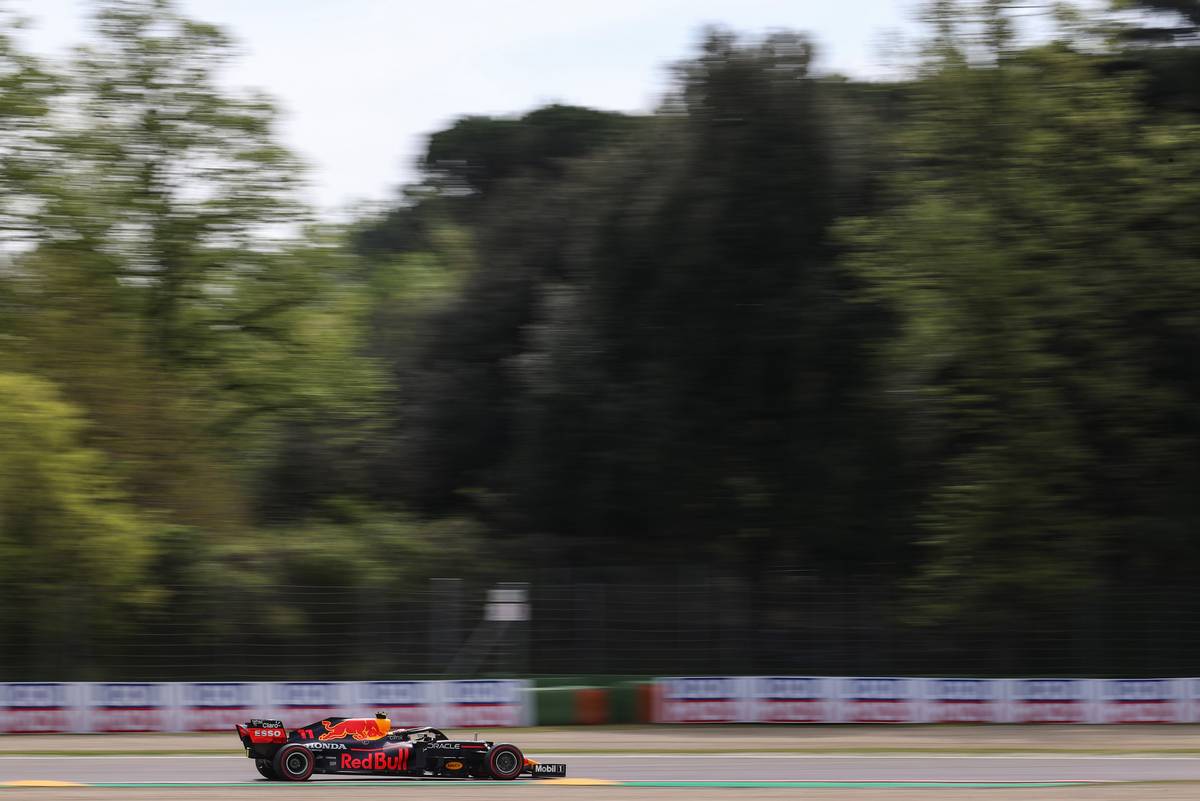 Q2: Perez quickest from Norris and Leclerc as Sainz and Alonso miss the cut

Buoyed by surviving the cut at the end of Q1, Latifi was first to head out for the second round accompanied by AlphaTauri's Pierre Gasly and by both the two Mercedes front runners. The latter pair were straight on the medium compound, as was Verstappen when he came out - although Perez had opted for the safety of the faster soft compound.

Hamilton came out top in the initial skirmish with a time of 1:14.817s putting him 0.067s ahead of Verstappen, and Bottas almost three tenths in arrears but still third ahead of Perez, Stroll, and Russell. Norris then made a splash by going a tenth clear of Hamilton at the top.

Meanwhile Leclerc was safely into fourth ahead of Bottas, and his Ferrari team mate Carlos Sainz tucked into eighth ahead of Gasly. That pushed Russell down to tenth but the Williams was still in with a shout of making the cut with the only driver yet to set a time being Vettel, whose initial lap had been voided for exceeding track limits. When he did finally post a time it was good enough for seventh ahead of Stroll, pushing Russell into the drop zone.

Most of the front runners didn't need to put in another push lap, although Perez did pull off a late effort to take the top spot from Norris with a time of 1:14.716s. At the other end, one final push from those at risk of elimination saw Daniel Ricciardo and Esteban Ocon among those to go safe, while Latifi successfully pushed ahead of Russell - but not by enough to break into the top ten.

Russell then had one last chance to improve his time and duly did so, by enough to put him back in front of both Vettel and Latifi - but not sufficiently to get him into Q3. However the shock elimination was Sainz who just missed the cut in 11th, while Alonso ended up slowest of the 15 cars taking part. 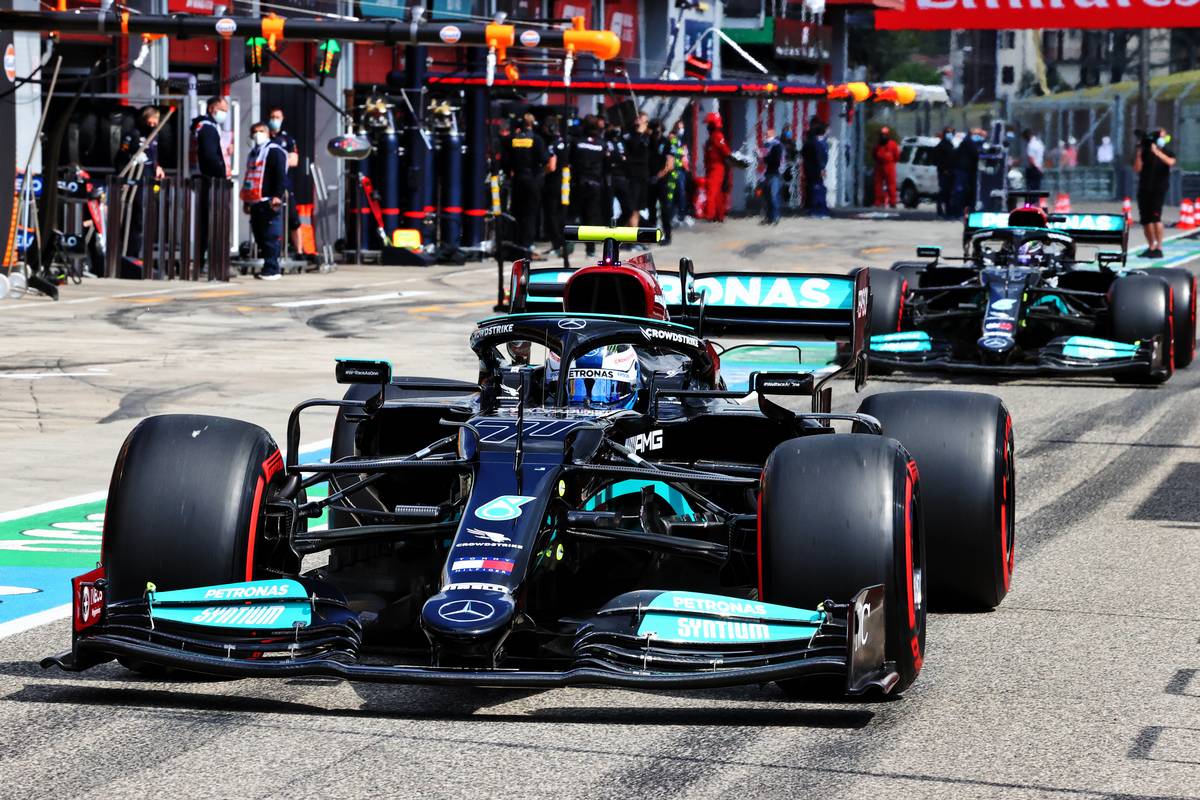 All ten drivers were swiftly out on track when the track went green for the final top ten pole shootout round.

Hamilton took first blood, posting a time of 1:14.411s to put him just under a tenth clear of Verstappen with Perez third followed by Norris and Leclerc, and Bottas a disappointing sixth (and six tenths slower than his team mate's provisional pole) ahead of Gasly, Ocon, Ricciardo and Stroll, whose time was then deleted for the inevitable track limits breach.

There was still time for all concerned to put in one last push, with Bottas first to take up the challenge. Unfortunately the Finn wasn't able to find the time needed to challenge for the top spot and he ultimately dropped back to eighth in the face of improvements from Gasly and Ricciardo. Hamilton was also not able to find any more improvements, but fortunately for the reigning world champion his existing time proved good enough to cling on for pole.

Norris briefly leapt up to second only to have his time deleted for going wide at turn 9, dropping him back to seventh. That opened the door for Perez to ambush Verstappen for second place, leaving Verstappen having to settle for the second row alongside Leclerc - making for an enticing prospect for the start of Sunday's race.