Red Bull's Max Verstappen came out on top after dominating a compelling wet race of thrills and spills at Imola to claim victory in the Emilia Romagna Grand Prix over Mercedes' Lewis Hamilton and McLaren's Lando Norris.

Hamilton had been forced to pull off a remarkable comeback effort: after losing the lead to Verstappen at the start, he slid off into the gravel from second place shortly after pitting for slick tyres on lap 31, which dropped him to ninth at mid-race distance.

A tough afternoon for Mercedes also saw Valtteri Bottas clash with Williams' George Russell, triggering a red flag for debris with both cars out of the race. Russell's team mate Nicholas Latifi had earlier retired after spinning off and making contact with Nikita Mazepin.

Expectations for an exciting second round of the 2021 world championship had already been sky-high after a close-fought qualifying saw Lewis Hamilton narrowly claim pole for Mercedes ahead of Red Bull pair Sergio Perez and Max Verstappen. But since then the cat had been well and truly thrown amongst the pigeons as a result of heavy rain showers. 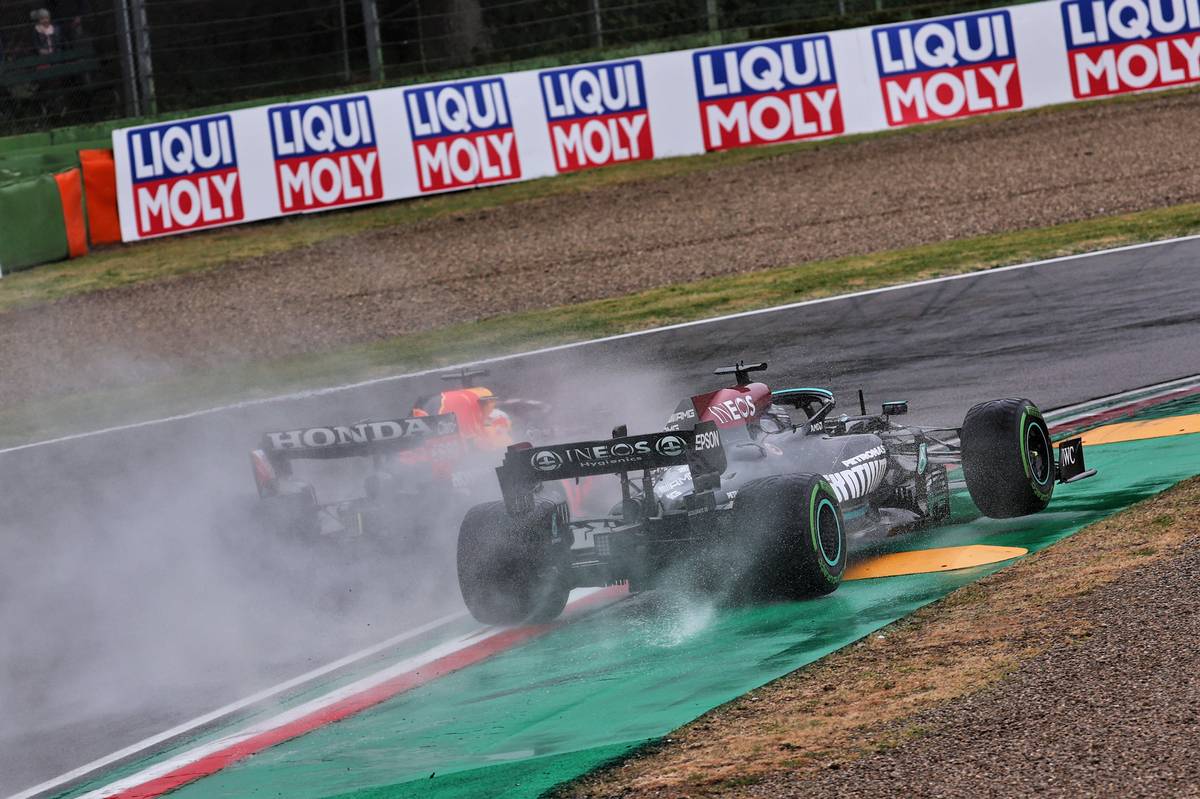 The circuit was left wet enough for Fernando Alonso to go off into the barriers on his way from pit lane to the grid, but fortunately the Alpine mechanics were able to repair the damaged front wing before the start of the race. The rain had more or less stopped by the time the cars lined up on the grid but there was little time for drivers to make their final selection of tyres. Aston Martin left it so late that Sebastian Vettel had to be wheeled away to start from pit lane.

Most teams opted for intermediates, but Pierre Gasly, Esteban Ocon and the two Haas cars were on full wets. Even on the formation lap there was more drama when Charles Leclerc briefly spun off into the gravel, but the he was able to keep his fourth place grid spot and the race started on schedule.

A poor getaway from Hamilton and an excellent one for Verstappen saw the cars go three-wide with Perez into the first corner. There was contact at Tamburello and Verstappen came out on top, barging Hamilton aside and leaving the Mercedes with front wing endplate damage. Hamilton then struggled to hold on to second over Perez, but the Mexican himself succumbed to a challenge from Leclerc before a safety car was scrambled after Nicholas Latifi spun off at Acque Minerali and made contact with Nikita Mazepin as he attempted to recover. 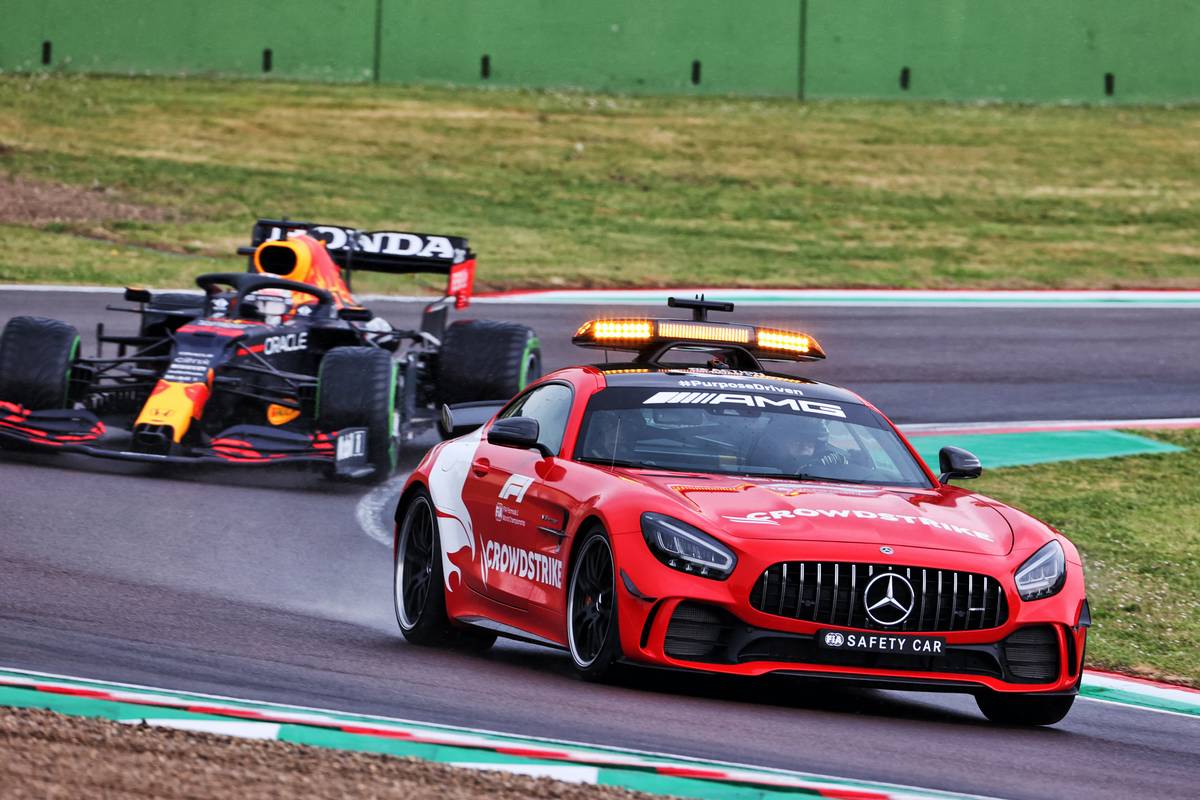 Even behind the safety car, conditions remained treacherous and Mick Schumacher was next to get caught out. Weaving to get heat into the tyres, the Haas went off and mashed its front wing in the barrier at turn 1 obliging him to head for pit lane - which was temporarily closed because of debris at pit exit from his own accident! At the same time Sergio Perez also went off-roading across the gravel at Piratella and was passed by Daniel Ricciardo and Pierre Gasly. The Red Bull then recovered and retook its fourth position but race control was not impressed and handed the Mexican a ten second penalty for overtaking behind the safety car.

After all this mayhem the race resumed on lap 7 with conditions still too wet to change to slicks. Hamilton had a good run on Verstappen but the Red Bull kept the lead and quickly blasted to safety, with Leclerc threatening in third place ahead of Perez, Ricciardo, Gasly, Lance Stroll, Carlos Sainz and Lando Norris, while Valtteri Bottas was down two places in tenth. Sainz was initially the man on the move and up to seventh only to be thwarted by Gasly as the AlphaTauri was on the full wets. That gave Norris the opportunity to pounce on them both and move up to sixth place, tucking in behind his McLaren team mate Ricciardo. Sainz soon followed Norris through for seventh place, demoting Gasly to eighth ahead of Stroll who briefly went off track as he lined up his own pass.

Sainz was proof of how slippery the track remained and survived two run-offs of his own without dropping a position. Gasly continued to fall back at a precipitous rate before finally pitting for inters on lap 16, briefly promoting George Russell into the top ten. Meanwhile at the front, Verstappen's advantage was up to five seconds although Hamilton had managed to stabilise his pace having come to grips with that front wing damage. 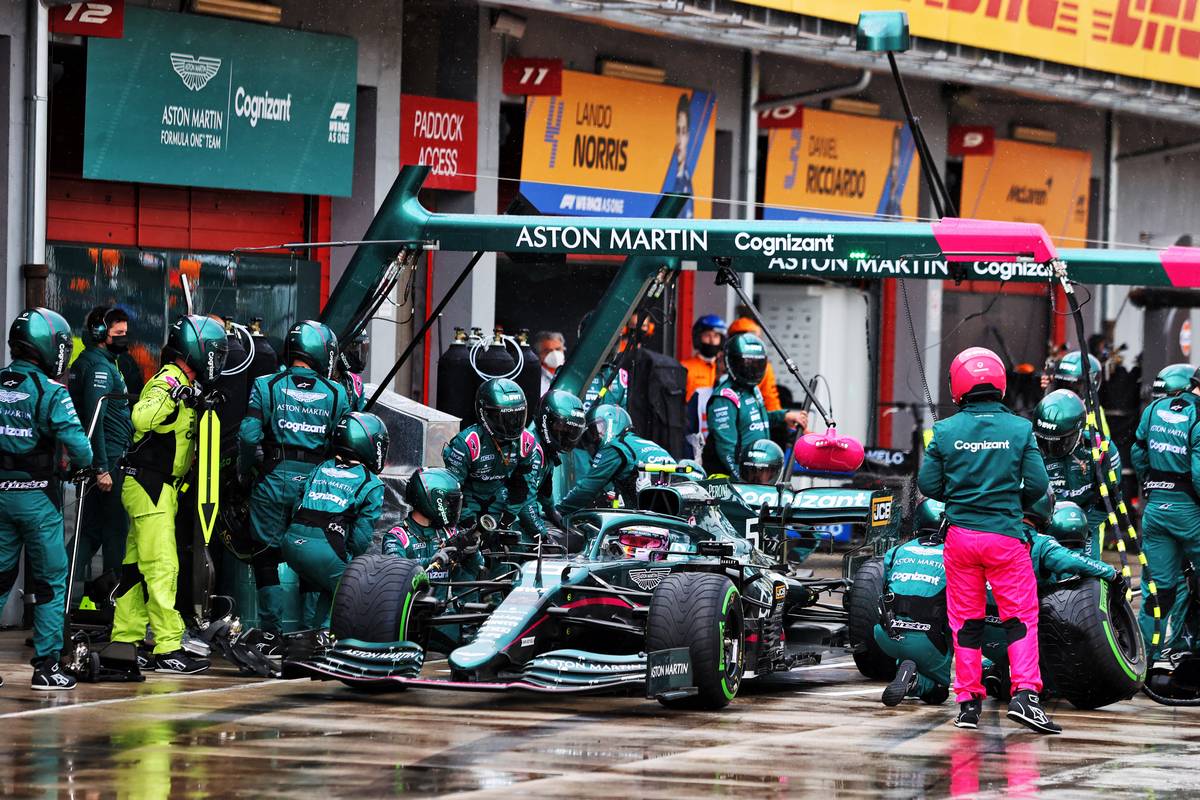 Further back, a fired-up Norris was feeling held up by Ricciardo and appealed to the McLaren pit wall to organise a swap. The Australian duly complied, and Norris emphatically proved the wisdom of the decision by quickly pulling out a five second gap as he gave chase to Perez, who was yet to serve his ten second penalty. Vettel had also been handed a stop-and-go penalty for not having his race tyres fitting in time before the start, and the four-time world champion became the first driver to switch to slicks on lap 22 for a new set of medium tyres - thereby becoming the canary in the coal mine for the other teams to watch intently for signs that it was time to make the change. Initially Vettel was merely a slow speed impediment to the leaders bearing down on him, which helped Hamilton eat into Verstappen's advantage.

However by lap 27 the situation was changing rapidly. Vettel now setting fastest laps meaning that the other drivers had to respond. Verstappen was the first of the leaders to pit leaving Hamilton putting his foot down in an attempt to pull off the overcut by coming in a lap later. However a slow right front change on the W12 meant that Verstappen easily held on to the lead over Hamilton, with Leclerc, Norris, Perez, Sainz and Ricciardo in pursuit. Bottas came in later than the others and soon found himself under heavy attack from Stroll who had DRS on his side.

Just as it appeared that Hamilton was about to launch his attack on Verstappen, the Mercedes slid off at Tosa and made contact with the barrier as he attempted to recover to the track. He haemorrhaged positions before finally reversing out of the gravel and limped back to pit lane for repairs. He was helped by a second safety car being scrambled, but this turned out to be even more bad news for Mercedes as it was caused by heavy contact between Bottas and Russell as the Williams tried to pull off a pass at Tamburello. Both cars were out of the race on the spot, bleeped recriminations from the drivers turning the team radio airwaves blue. 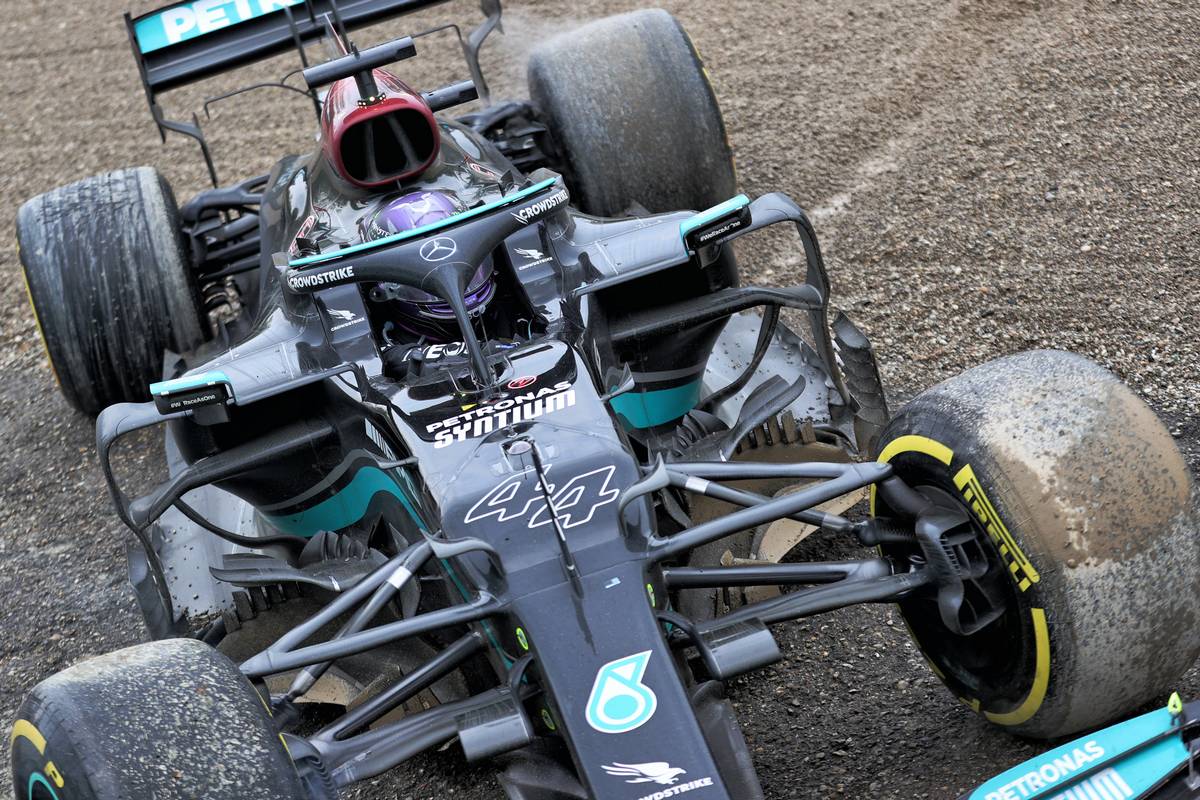 The accident had resulted in so much debris that race control was forced to convert the safety car to a red flag with 34 of 63 laps complete. When the cars lined up for a rolling restart, a drying line meant everyone was on slicks. Verstappen remained in front behind the safety car followed by Leclerc and Norris after Perez had served his penalty and dropped to fourth ahead of Sainz and Ricciardo. Everyone who had been lapped from Stroll down were able to unlap themselves, but Kimi Raikkonen promptly spun at Tamburello before the race resumed giving up eighth to Hamilton and promoting Yuki Tsunoda to ninth - before the AlphaTauri rookie also went for a spin in he country.

They weren't alone in struggling: the race leader also had a major scare at Rivazza, miraculously saving the car from a major accident and managing to retain the lead when the race resumed. Norris was immediately up to second, having opted to take on soft tyres during the intermission while the others stayed on mediums. As Verstappen proceeded to quickly build up what proved to be a 20s safety margin, there was drama for the second Red Bull. Perez oversteered backwards into the gravel at the Villeneuve Chicane, dropping him from fourth to 14th place where he would go on to engage in a fierce battle for position with Vettel.

Perez' misfortune was to Hamilton's gain. The world champion dispatched Stroll at Tamburello (admittedly helped by the Aston losing sync with engine shifts) and then made swift work of sweeping around the outside of Tamburello to dispatch Ricciardo two laps later. That put him behind the two Ferraris, and Hamilton took care of Sainz on lap 49 before lining up Leclerc for a successful overtake on lap 55 once the Ferrari dropped out of DRS activation range from Norris. After that it was just a matter of time before Hamilton completed his outstanding damage limitation exercise to reclaim second from Norris with four laps to go, and then putting his foot down to prevent Norris from even thinking of staging any comeback. Hamilton also picked up the bonus point for setting the fastest lap to keep hold of the lead in the drivers championship.

Behind Leclerc and Sainz, Ricciardo picked up sixth place ahead of Stroll, Gasly, Raikkonen and Ocon. Alonso finished just out of the points in 11th ahead of Perez, Tsunoda and Giovinazzi, with Vettel classified in 15th despite retiring with gearbox issues in the closing minutes. Haas pair Schumacher and Mazepin were the last cars still running at the chequered flag.