Lando Norris was delighted to finish on the podium in Sunday's Emilia Romagna Grand Prix in Imola, despite losing out on second place to Lewis Hamilton in the closing laps.

Norris had been upset with his qualifying performance 24 hours previously, where a small error on his fastest Q3 lap resulted in the time being deleted dropping him from a potential second place to seventh on the grid.

He said that he was disappointed and annoyed by his mistake: "On that one lap that I don’t need to make a mistake on, I effed it all up!"

He then had a poor start to the race, losing spots to Carlos Sainz and Lance Stroll before the safety car was scrambled for Nicholas Latifi's retirement.

But rather than giving up, Norris took inspiration from the setbacks and fired up the afterburners, immediately passing Stroll at the restart and then getting the jump on Sainz on the next lap.

"I am happy. A nice recovery after yesterday," Norris told F1 TV after the finish. "A long race, a tough one. I didn't start so well, but I came back, I had good pace."

It didn't end there. After dispatching Pierre Gasly, Norris then found himself stymied behind his team mate Daniel Ricciardo, and petitioned the team to persuade the Australian to let him get past.

Once he did, Norris quickly pulled away and after the red flag stoppage he was able to dispatch Charles Leclerc to take second place behind race leader Max Verstappen.

"It's nice to be fighting these guys, to be there on merit and there on pure pace. Hopefully we can have some more in the future. 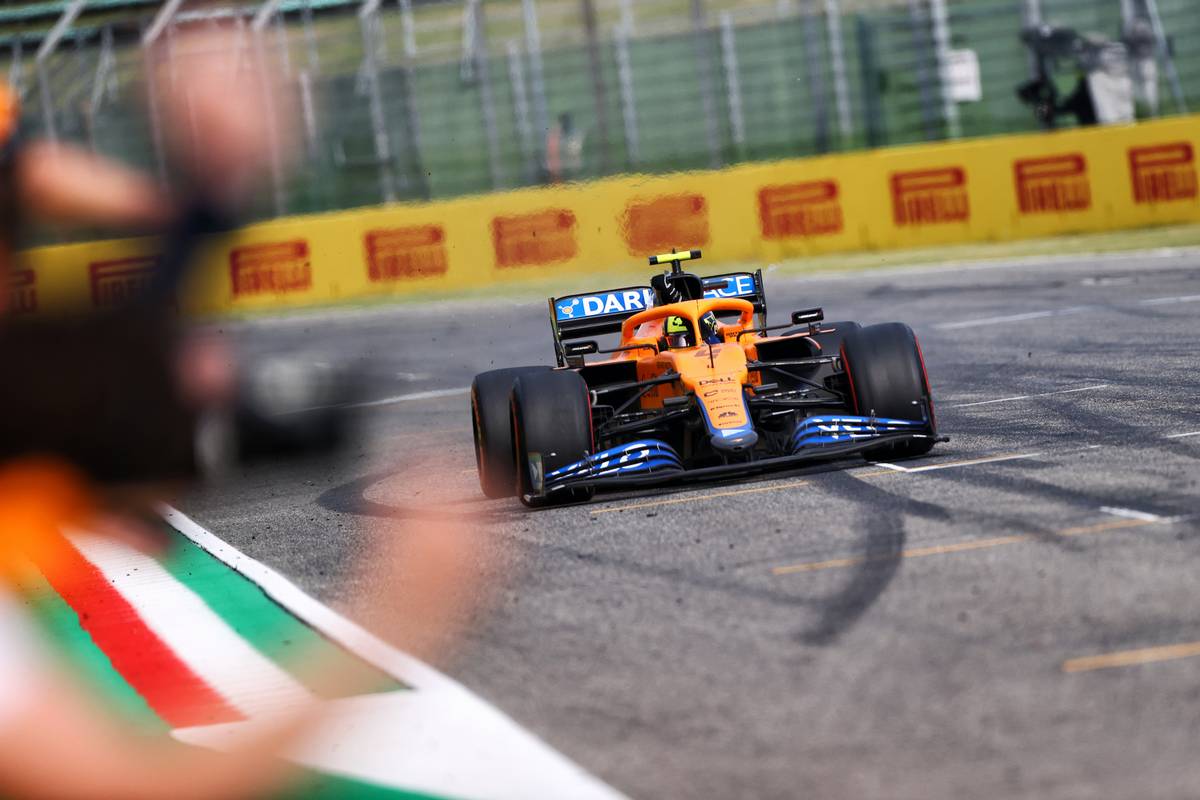 However he wasn't able to hold off Lewis Hamilton when the Mercedes came calling with four laps to go and had to settle for third place on the podium instead.

"We opted to go on the softs for the restart," Norris said. "I got a good launch, good restart and got ahead of [Leclerc].

"I had good pace for the first ten to 15 laps but I knew I was going to struggle at the end, especially with Lewis behind me. It was not going to be easy, but I tried.

"I was trying to save up as much as possible, but in the end I didn’t have enough rear tyre out of the last two corners and the chicane to hold him behind.

"Lewis was a bit too quick for me today," he conceded. "I held on for two or three laps but in the end I just couldn't hang on. But I'm happy than third, I'm not disappointed.

“On the whole I’m very pleased with myself, but [also] the team as well,” he said. “I think apart from Q3 it was a pretty perfect weekend.

“I was disappointed yesterday, so to come back to third today after a pretty eventful race for myself - and I’m sure the others as well - was rewarding for myself, but more importantly, the team.”

His performance meant that Norris won the fan vote for Driver of the Day by 32.3 per cent to 15.5 per cent for Verstappen and 13.9 per cent for Hamilton.

It's the first time that Norris has finished on the podium since his debut appearance in the top three at Austria, the first race of the 2020 season.

With both Hamilton and Norris in the top three on Sunday, it means there have been a total of 700 podium appearances for British drivers in the 71-year history of Formula 1.

The last time there were two British drivers on the podium was China in 2012 when Hamilton was joined by his then-McLaren team mate Jenson Button in a race won by Mercedes' Nico Rosberg.

Norris current team mate Daniel Ricciardo wasn't able to match the 21-year-old's pace on Sunday, and finished in sixth place after allowing Norris past on lap 17.