Mercedes boss Toto Wolff was "absolutely not amused" by the crash that involved Valtteri Bottas and George Russell in Sunday's Emilia Romagna GP, insisting the Williams driver - and Mercedes protégé - still has "lots to learn".

Bottas and Russell came together when the latter attempted to pass the former on the outside on the run down to Imola's Turn 2. But in the process, the Williams driver put a wheel on the wet grass and lost control, hitting Bottas with both drivers spinning out of control and making heavy contact with the barriers, spreading debris around the track which triggered a red flag.

Wolff stopped short of apportioning blame on either driver, commenting that there was "never such a situation in life where one is 100% to blame and the other zero".

But the Austrian did question Russell's ill-fated maneuver and the very specific context in which it was done. 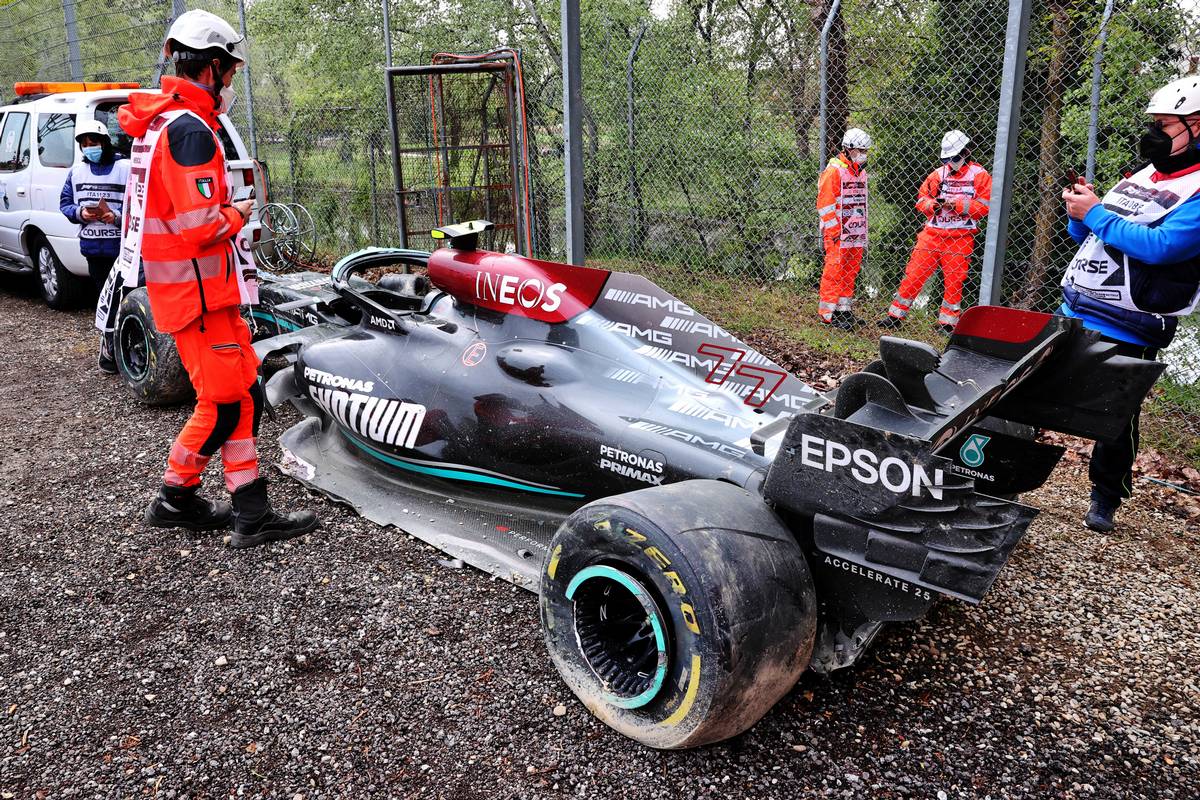 "The whole situation should have never happened," Wolff said. "Valtteri had a bad first 30 laps and shouldn’t have been there. But George should have never launched into this manoeuvre, considering that the track was drying up.

"It meant taking risks, and the other car is a Mercedes in front of him. In any driver’s development, for a young driver, you must never lose this global perspective.

"So yeah, lots to learn for him I guess."

Beyond the incident's particular circumstances, Wolff suggested that Russell should have weighed up the situation and risk in the context of racing a Mercedes driver.

"You need to see that there is a Mercedes and it is wet, it bears a certain risk to overtake," the Mercedes boss explained.

"And the odds are against him anyway when the track is drying up. Now I don’t want him to try to prove anything to us, because one thing I can say since knowing Valtteri for five years, he’s not trying to prove anything."

Speaking to the media after the race, Russell pointed the finger at Bottas and questioned the Finn's defensive move, saying he would have perhaps not have done it against another driver.

A remark that hinted at Russell's status as Bottas' potential successor at Mercedes for 2022.

But Wolff, when told about Russell's comment, said the Briton's claim was "bullshit".

"The whole situation is absolutely not amusing for us, to be honest," Wolff said.

"It’s quite a big shunt. Our car is almost a write-off in a cost-cap environment that is certainly what we needed, and probably it’s going to limit upgrades that we’re able to do.

"Simply the fact that we ended there by losing it in the wet, because there was no contact, losing it on the wet, and making both cars crash out is not what I expect to see."