Lewis Hamilton achieved his 97th Formula 1 win by claiming victory in the Portuguese Grand Prix at Portimão over Max Verstappen and Valtteri Bottas, despite having lost second place to Verstappen during an early restart.

Hamilton was able to mount an attack on Verstappen to retake his lost positon and then went on to pull off a tough but fair strike on his Mercedes team mate on lap 20 that set him on the way to victory.

Verstappen's Red Bull partner Sergio Perez just missed out on the podium despite leading much of the race having recovered from a poor start, with McLaren's Lando Norris finishing as 'best of the rest' in fifth from Ferrari's Charles Leclerc. 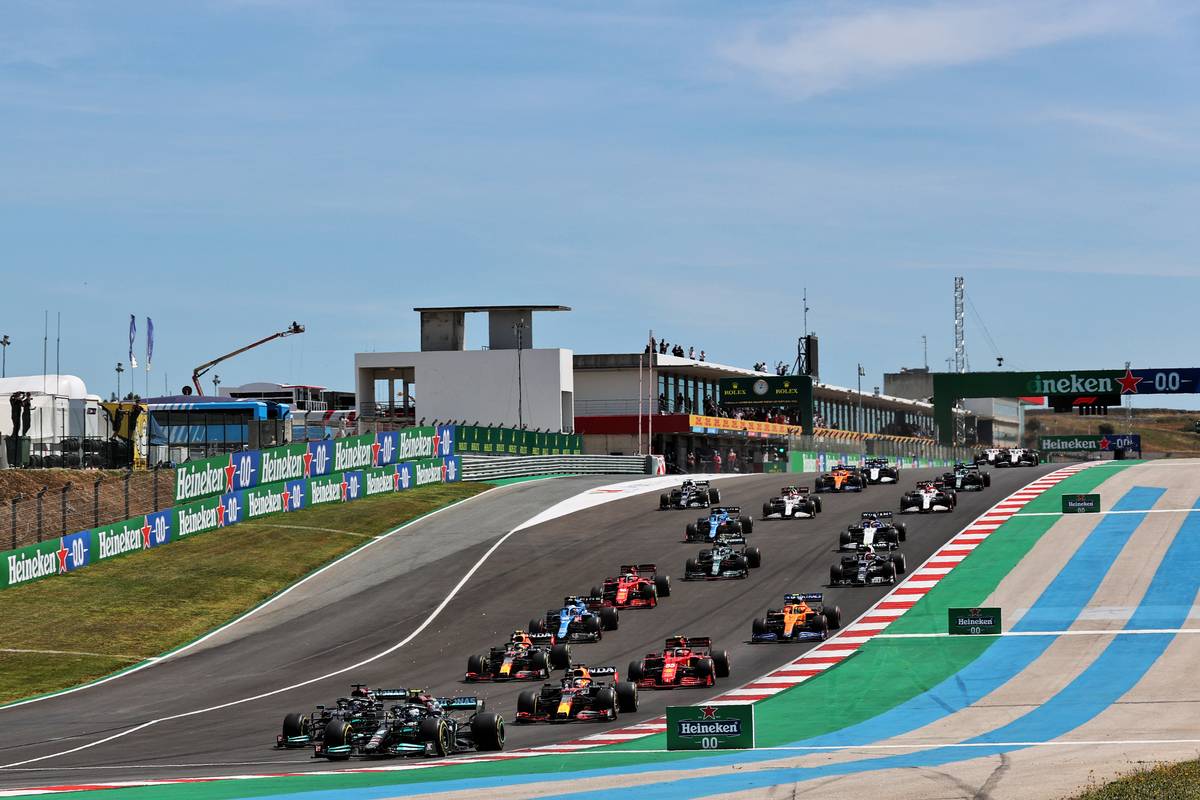 Bright, dry and pleasantly warm weather at the Autódromo Internacional do Algarve meant there was no prospect of a repeat of the mayhem caused by the tricky conditions experienced by the field last time out at Imola.

All 20 drivers duly took their place on the grid for the start of the race without incident, led by Mercedes pair Valtteri Bottas and Lewis Hamilton ahead of Red Bull pair Max Verstappen and Sergio Perez. All four were on the medium compound but the remainder of the top ten were sporting softs with the exception of Ferrari's Charles Leclerc in eighth. Meanwhile the second half of the grid were predominantly on mediums, except for Alfa Romeo's Kimi Raikkonen and Aston Martin's Lance Stroll in 15th and 17th respectively.

When the lights went out, Bottas and Hamilton got solid starts and maintained position into turn 1, both proving more than capable of fending off Verstappen. Behind them a poor launch by Perez left the Mexican vulnerable to attack by Ferrari's Carlos Sainz, while Lando Norris managed to pick off Esteban Ocon in the first of a series of position swaps as the McLaren and Alpine went about trading places over the first lap. However the race was neutralised by a safety car at the start of lap 2 after Raikkonen missed his braking point and ploughed into the back of his Alfa Romeo team mate Antonio Giovinazzi heading down the main straight. It sent the Finn into the gravel after losing his front wing and shedding debris over the track.

"Unfortunately it was my mistake," Raikkonen said on the Alfa Romeo social media channel later. "I got it wrong and drove into Antonio. The front wing got stuck under the car and I could only go straight in the gravel. The only upside was that Antonio did not get any damage." 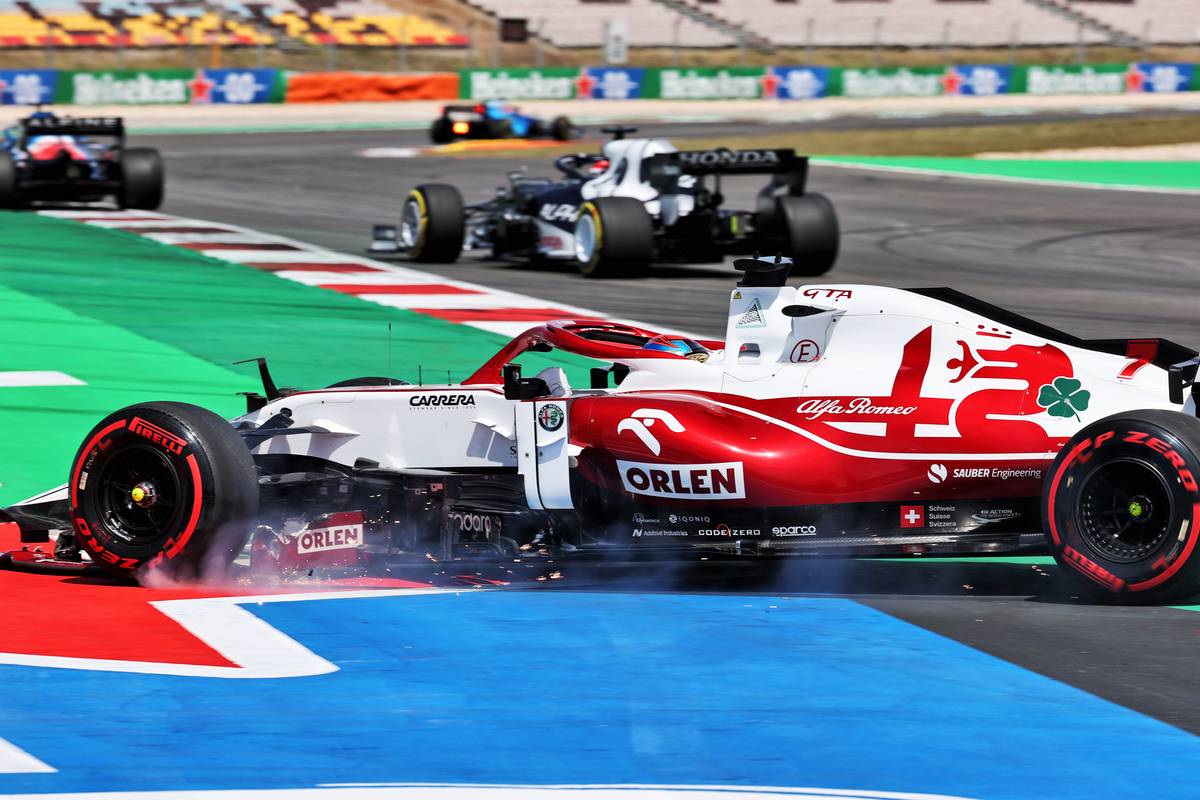 The safety car came in and the race resumed on lap 7 with Bottas leaving it late to put his foot down, allowing Verstappen to pick up the tow and line up a successful sweeping attack on Hamilton around the outside of turn 1. Perez had a better restart and regained the earlier dropped position from Sainz, but both lost out to a flying Norris who immediately shot up to fourth place on the soft tyres.

Bottas was doing everything he could to keep the lead, but the introduction of DRS on lap 10 meant Verstappen was soon pushing hard and lining up what seemed to be the inevitable pass. However when he was about to go in for the kill the Red Bull wobbled in turn 14 and lost ground, handing Hamilton the opportunity to catch and pass him to successfully reclaim second place. Crucially the two Mercedes were then able to pull out of DRS range to prevent a counter strike from Verstappen, who reported over the team radio that he was "just a sitting duck on the straights, unbelievable!"

Behind the top three there was happier news for Red Bull as Perez took back fourth with a pass on Norris whose soft tyres were starting to wane. The two Ferraris (Sainz and Leclerc) were flying in formation in sixth and seventh, with Ocon down to eighth ahead of AlphaTauri's Pierre Gasly and Aston Martin's Sebastian Vettel. Just out of the points, Daniel Riccardo was in 11th having started from 16th on the grid, followed by Giovinazzi whose car had indeed survived the early ramming from his team mate. The Aussie was able to maintain his progress with a pass on Vettel for tenth at the start of lap 18.

Hamilton continued to stalk the race leader and was looking faster than Bottas, but unable to find a way to pass safely and with no sign of team orders from the Mercedes pit wall. Finally the world champion sprang his trap, pulling off a remarkable sweep around the outside of turn 1 to take the lead of the race for this first time on lap 20, a move that relied on hard-but-fair-racing from the Finn to prevent it from ending in disaster for both men. However all that hard work had taken its toll on Hamilton's tyres, and Bottas himself was now falling into the clutches of Verstappen although the Red Bull driver was also now reporting problems engaging third gear. 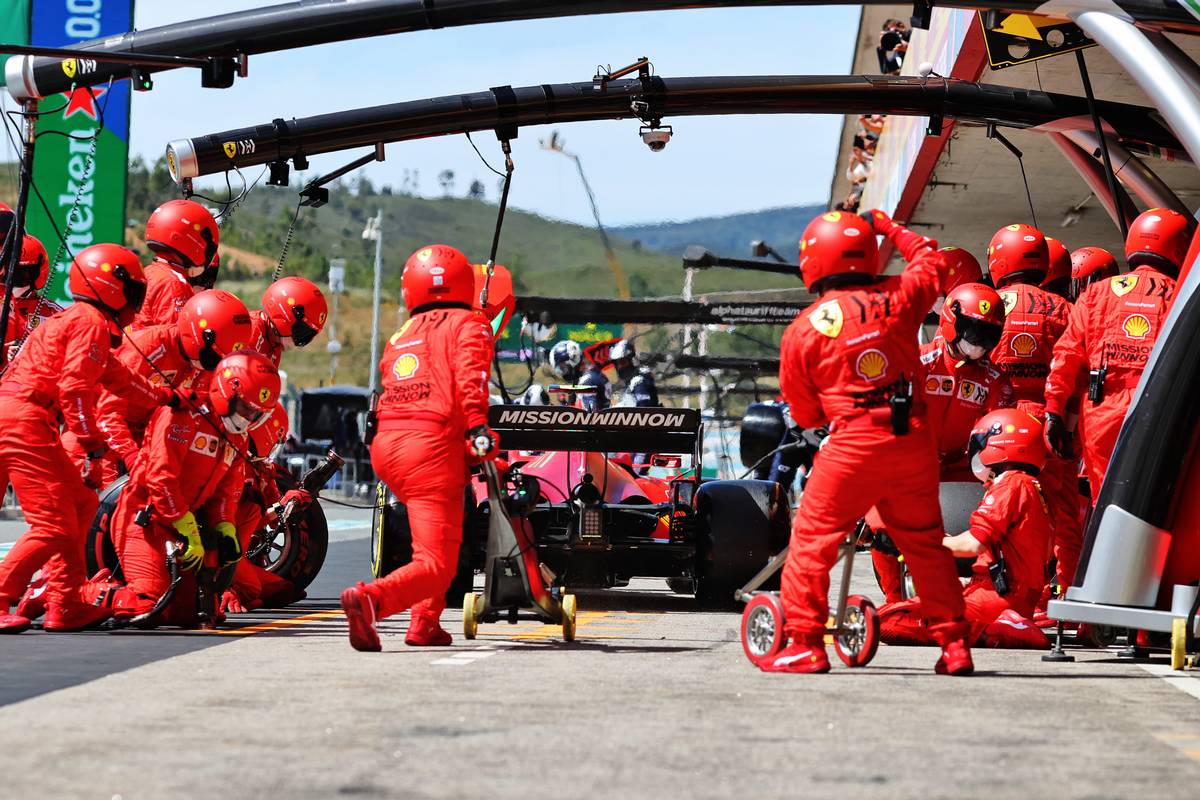 Sainz was the first of the leaders to pit on lap 22, changing his starting softs for mediums and Norris reacting immediately next time round to cover off the threat. Vettel and Gasly were also in for a change to the medium while Ocon, Tsunoda and Giovinazzi likewise pitted but opted for the hard compound. But all eyes were on the top six that had started on the medium tyres and were yet to pull the pin on their pit stop: it was Leclerc who blinked first on lap 27, and his choice was the white-walled hard compound.

Despite complaining about his worn mediums, Hamilton set about punching in a series of new fastest laps in preparation for his own pit stop, extending his margin over Bottas to three seconds. At the halfway point, the top seven - Hamilton, Bottas, Verstappen, Perez, Ricciardo, Alonso and Stroll - had yet to stop with Norris, Sainz and Leclerc in eighth, ninth and tenth respectively the highest placed of those that had, albeit now running almost a full minute behind the race leader.

Red Bull finally called Verstappen in for a set of hard tyres on lap 37 and Mercedes immediately responded by summoning Bottas in for his own service. That one lap difference allowed Verstappen to eliminate the gap and successfully challenge for position when Bottas slid wide at turn 3 while trying to warm up his new tyres. Hamilton was in next time by, ceding a temporary 12s race lead to Perez as Red Bull split its strategies by having the Mexican run a long first stint.

Stroll finally pitted after a remarkable 41 laps on the soft compound. Alonso was also in, with Ricciardo then pitting on lap 43 but suffering a slow service from the McLaren pit crew that dropped him back to tenth place. That left Perez as the last man still standing on his starting set of medium tyres, his lead now reduced to 8s over Hamilton, Verstappen and Bottas with Norris returned to fifth ahead of Leclerc, Ocon, Sainz, Gasly and Ricciardo. Perez' lead was further eroded when he narrowly survived a perilous near-miss while lapping Haas' Nikita Mazepin, who seemed oblivious to the blue flags aimed in his direction and who inevitably earned a five second penalty from the race stewards for his inattention. 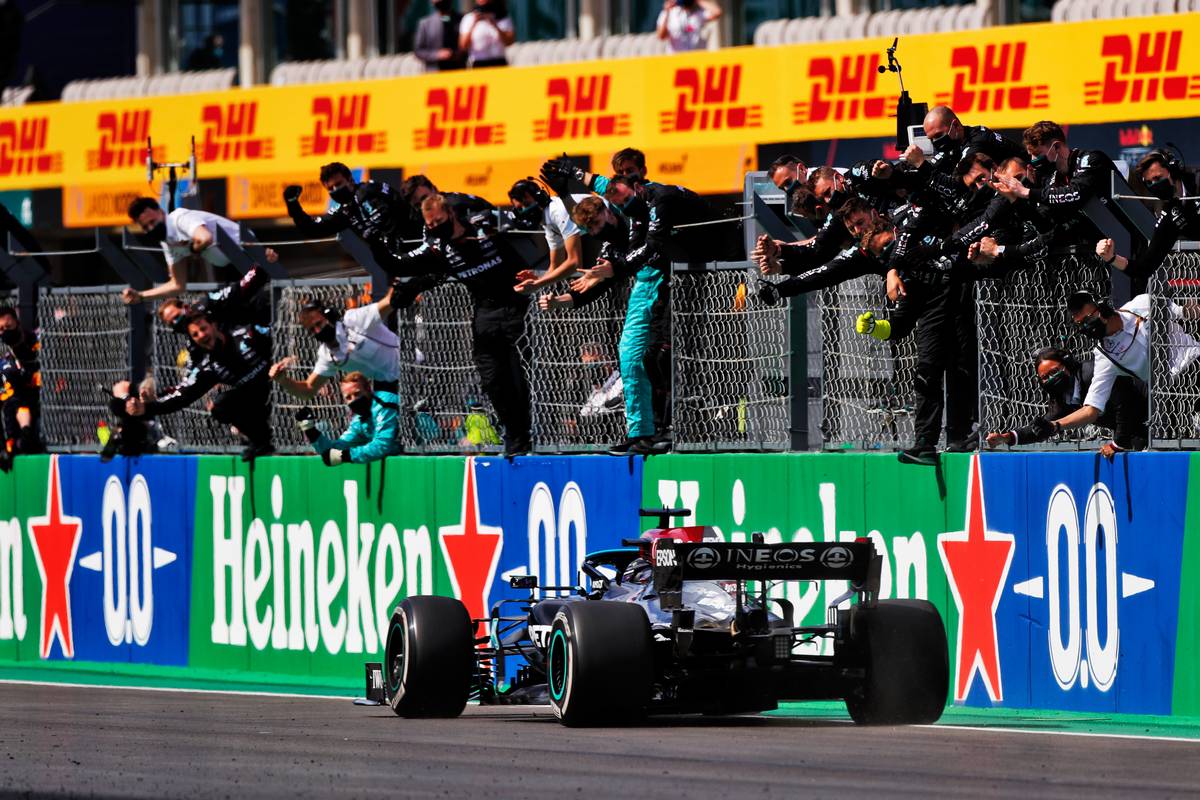 Having hunted down the leader, Hamilton then soon did the rest, catching and passing Perez with ease on lap 51 - apparently unaware that Perez had been technically leading the race all this time. Having done all he could to hold up Hamilton by making it difficult to pass, Perez pitted straight after. With just 15 laps to go in the race he was able to take on a set of soft tyres, with his eye now firmly on picking up the bonus point for fastest lap. However he lacked the requisite pace, and in the final laps the battle was joined by Bottas and Verstappen who both came in for a 'free' second stop and a switch to softs. The duel for the final point was eventually won by the Finn after Verstappen's better time was surprisingly deleted for exceeding track limits at turn 14.

All this handed Hamilton a half minute lead at the chequered flag over Verstappen and Bottas, who had earlier suffered a brief exhaust temperature sensor glitch that was rectified by the Mercedes pit wall. Having initially fallen a long way back as a result of his late final pit stop, Perez remained secure in fourth ahead of Norris, Leclerc and Ocon while Alonso pulled off an accomplished pass on Sainz to take eighth place on lap 59.

Sainz lost further pace and positions in the final minutes to fall out of the top ten, leaving Ricciardo crossing the line in ninth ahead of Gasly. Giovinazzi was 12th followed by Aston Martin team mates Vettel and Stroll, while Tsunoda eased to 15th ahead of Williams' George Russell. A surprisingly competitive Mick Schumacher got the better of Nicholas Latifi in the closing laps, while his team mate Mazepin was inevitably the last man on track after his penalty left him two laps off the lead by the finish.