Mercedes Lewis Hamilton took his third win of the 2021 world championship with victory in the Spanish Grand Prix, despite losing the lead of the race in the first corner.

Mercedes executed a perfect race strategy to cover off Max Verstappen's early advantage, allowing Hamilton to get back to the front with six laps to go and force the Red Bull to settle for second.

Valtteri Bottas secured third place ahead of Ferrari's Charles Leclerc. Sergio Perez was next, with McLaren's Daniel Ricciardo securing 'best of the rest' honours in sixth in a race with just one retirement after Yuki Tsunoda's engine cut out on lap 7. 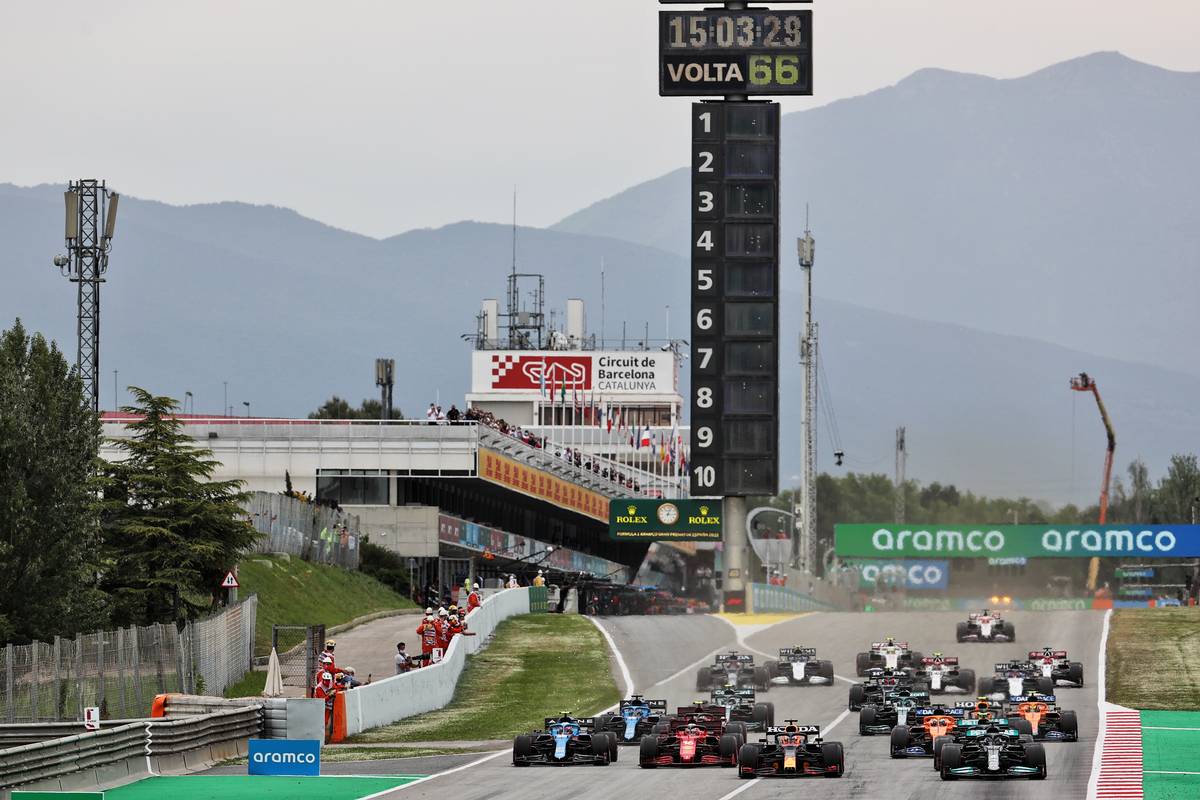 Just 24 hours earlier, the Circuit de Barcelona-Catalunya had been basking in scorching sunshine and blue skies, but overnight the clouds had rolled in leaving race day looking distinctly overcast with even a hint of rain in the air - although chances of any precipitation in the race were put at only 20 percent. Drivers were more concerned by the tailwind that was now blowing down the main straight, as polesitter Lewis Hamilton led Verstappen, Bottas and Leclerc to their allotted grid positions for the start of the race.

With the exception of Kimi Raikkonen in 17th, the entire field was starting the race on the soft option tyres. That meant it was a fair fight in the long 600m run down to the first corner when the race lights went out to get the action underway. Verstappen managed to tuck into the slipstream of the Mercedes and then made his move down the inside at turn 1 to seize the lead, forcing Hamilton to go wide to avoid a potentially race-ending collision.

Behind them, Bottas initially retained third but then found himself held up by Hamilton, allowing Leclerc to take the position at turn 3. Bottas was all over the back of the Ferrari but found no way to put his obvious speed advantage to good use, even with the help of the slipstream and DRS. Unable to regain the position, it also meant the two leaders began pulling away at the front.

Daniel Ricciardo had picked up two early positions to put the McLaren up to fifth ahead of Sergio Perez and Esteban Ocon, with Carlos Sainz having dropped to eighth ahead of Lando Norris and Fernando Alonso. The two Aston Martins were just outside the top ten with Lance Stroll and Sebastian Vettel in 11th and 12th respectively, while AlphaTauri's Pierre Gasly was placed under investigation for being out of position on the grid. It would eventually result in incurring a five second penalty at his subsequent pit stop, but for now he was still running in 13th. 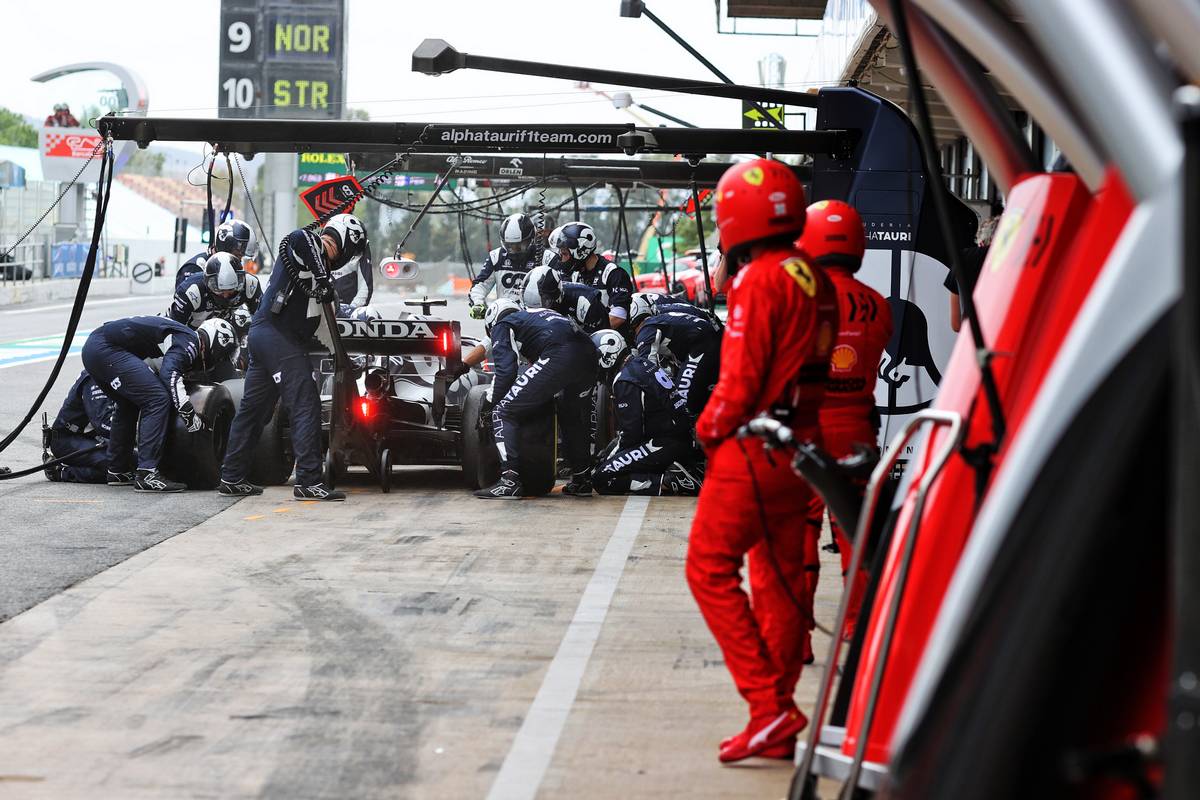 Gasly's team mate Yuki Tsunoda became the first retirement on lap 7 when his engine abruptly cut out leaving him parked at the outside of turn 10, necessitating a brief safety car while the marshals attended the scene. Antonio Giovinazzi took the opportunity to pit, but the Alfa Romeo team found that one of his new tyres had deflated meaning a lengthy delay while a complete new set was brought out. William's decision to double stack George Russell and Nicholas Latifi went much more smoothly by comparison.

The intermission had packed the field together. When the race resumed, Verstappen was safely away at the front while Hamilton had work to do to stay ahead of Leclerc. Further back, Stroll claimed the notable scalp of Alonso around the outside of turn 4 to put himself into the top ten. Russell and Latifi were similarly soon able to use their new medium tyres to dispense with Haas' pair Mick Schumacher and Nikita Mazepin, with Giovinazzi also starting to make progress from the back after his nightmare pitstop.

Tyre wear was proving to be lower than the teams had feared, and the safety car period also had an impact on team strategies. It wasn't until lap 23 when Sainz became the first of the top ten to pit for mediums, triggering several of those around him to respond with stops of their own. Bottas joined them on lap 24 in pursuit of the undercut on Leclerc, and then it was the turn of the leader to come in. But it was a slower stop than usual for Red Bull, with Verstappen stationary for 4.2s as the mechanics grappled with the late arrival of the left rear tyre. It meant he briefly dropped behind his team mate Perez when he returned to the track.

Mercedes kept Hamilton out until lap 29 before the instruction came from the pit wall to box, and he was followed on to pit lane by Leclerc. Hamilton's extra time out on track on the waning soft tyres meant that he was now six seconds in arrears of Verstappen, but there was better news for Mercedes after their bid to have Bottas undercut Leclerc for third paid off handsomely. Ricciardo was back up to fifth place ahead of Raikkonen, who was starting to struggle as he was yet to pit having started on the yellow-walled compound. As the halfway point loomed he lost positions to Perez and Sainz and was busy trying to fend off Ocon and Norris. 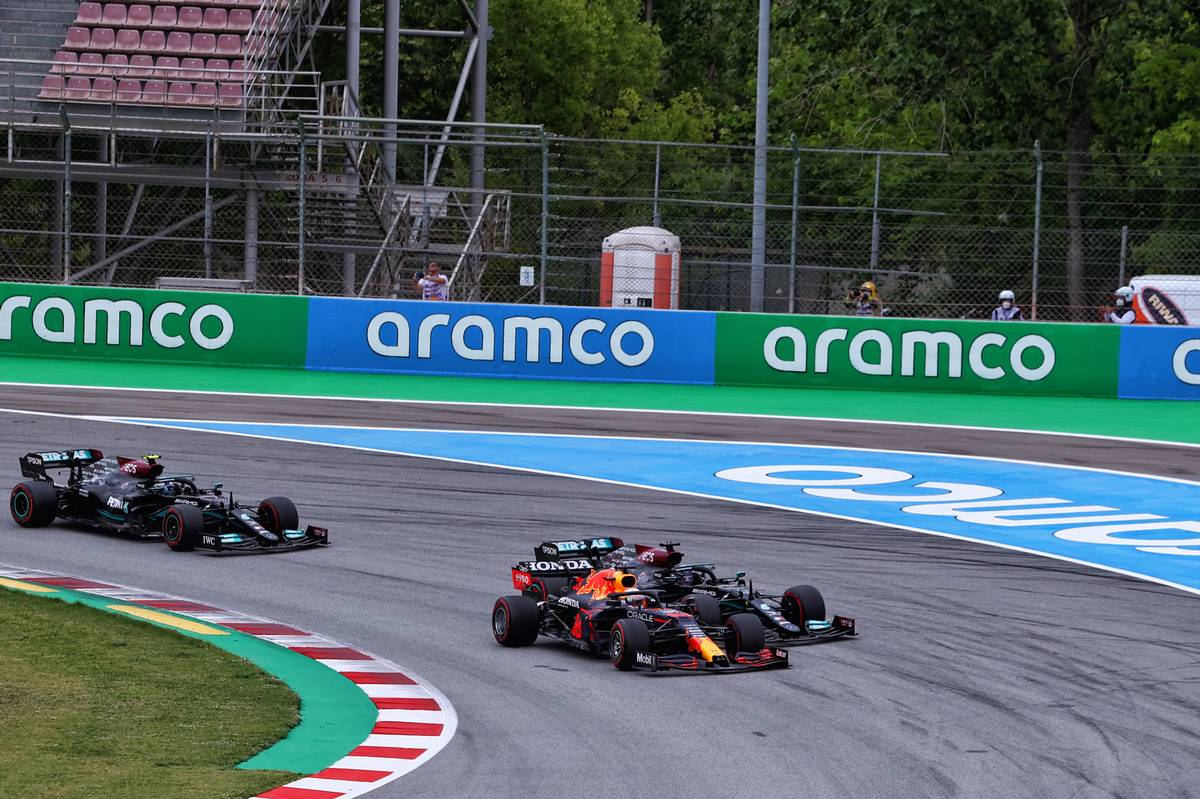 Hamilton set about using his fresher tyres to eat into Verstappen's lead, and by lap 34 he was hovering just within the one second DRS activation range of the Red Bull. Verstappen was able to respond and picked up the pace despite complaining of having less grip than the Mercedes, with Hamilton continuing to apply pressure in the hope of forcing a mistake from his rival.

Raikkonen finally pitted on lap 38 for a set of softs having fallen to tenth, and by this time some of those further back had already made a second stop. Williams chose to keep Russell and Latifi on the medium compound, while Stroll and Vettel both switched back to the soft. Even so, it was a surprise when Hamilton joined the two-stop club and came in for another set of lightly used mediums on lap 43, dropping him to third place behind Bottas (but comfortably ahead of Leclerc) and running 22s behind Verstappen.

It was a lot of time to make up. Could Verstappen make it to the finish on his current set of tyres? "I don't see how we can make it to the end," he told the Red Bull pit wall. If he did try, could Hamilton catch him in the remaining 22 laps? The Mercedes had already made enough progress to prevent his rival from making a stop of his own and still retain the lead. And how would Mercedes utilise Bottas in the closing laps?

Leclerc continued his quiet afternoon drive in the Spanish countryside in fourth place ahead of Perez, who had succeeded in passing Ricciardo around the outside of turn 1 for fifth on lap 46. The McLaren then stopped again and switched to softs at the same time as Sainz did the same, which briefly promoted Ocon and Norris to sixth and seventh respectively. Norris soon made way for Ricciardo on fresher tyres and then also succumbed to an attack from the likewise advantaged Sainz, with the pair then setting about hunting down and passing Ocon. 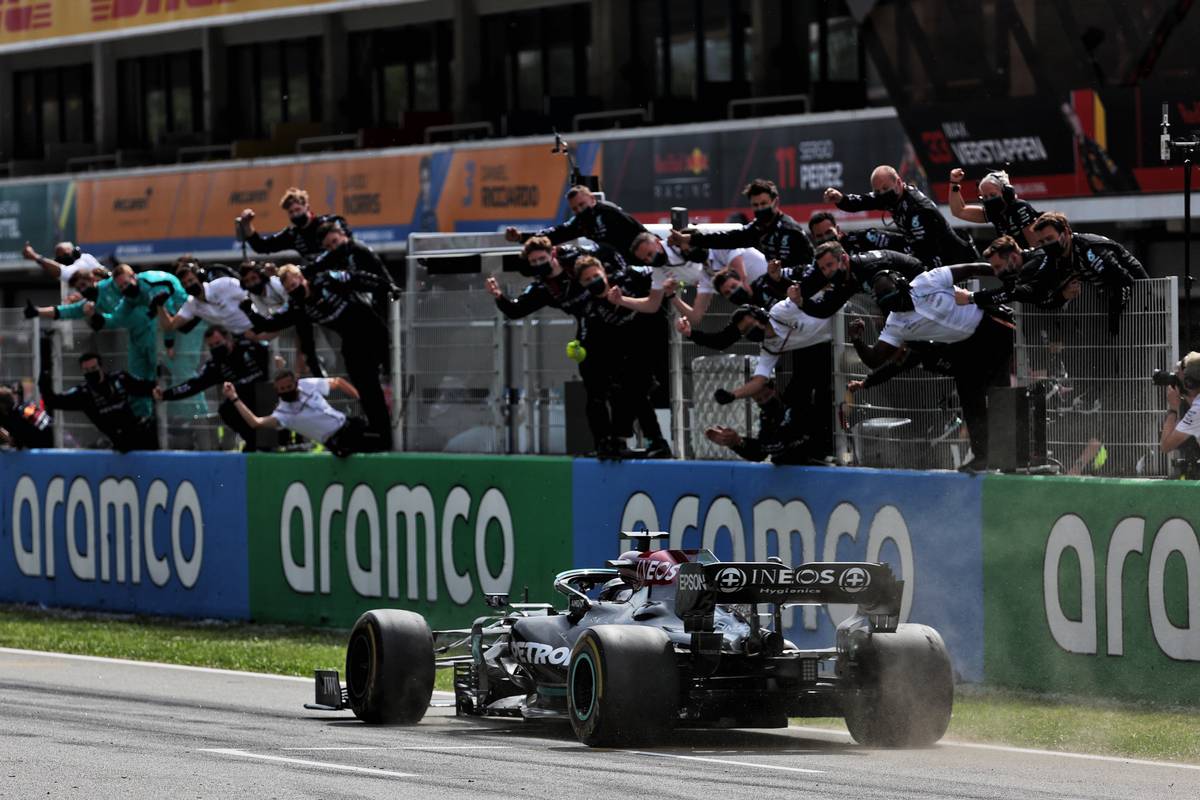 Hamilton passed Bottas for second on lap 52, but the Finn had been in no mood to hand the position over on a silver platter and it had cost Hamilton precious time he didn't have. Bottas then pitted and switched to soft tyres, briefly dropping him behind Leclerc as Hamilton sliced a further two seconds off Verstappen's lead. The two Mercedes were attempting to construct a trap on either side of the Red Bull that would leave Verstappen with no room to manoeuvre.

The trap was sprung on lap 60. With a sense of complete inevitability, Hamilton caught and swept past Verstappen to take the lead of the race. He was soon pulling away to safety and his 98th Grand Prix victory, leaving Verstappen to cover off Bottas for second place and join others including Leclerc and Perez in making a late extra pit stop and a final change to back soft tyres in what ultimately proved to be a successful pursuit of the bonus championship point for the fastest lap for Verstappen.

With the top five set, Ricciardo picked up sixth from Sainz and Norris, who finished ahead of a one-stopping Ocon. Gasly picked up the final point in tenth after successfully dispatching Stroll in the final laps, with Raikkonen 12th followed by Vettel, Russell, Giovinazzi, Latifi, Alonso and the two Haas cars at the rear and two laps down, with Tsunoda the only retirement of the day.