Although labeled a 'street circuit', Baku offers a variety of corners and sections, but also the longest straight on the F1 calendar.

However, the scenic 6-kilometer urban lay-out that flows through the Old City and meanders past its fortress walls requires, unlike Monaco, a subtle balance between aerodynamic efficiency and straight-line prowess.

Baku's speed trap is located on the main straight, just before the pits. But drivers reach maximum velocity a little further down the road.

However, we'll discard the latter as a reference as it indicates that Carlos Sainz was clocked at a whopping 344.8 km/h at the end of the straight, or almost 10 km/h faster than the second fastest car, Lewis Hamilton's Mercedes, which points to a possible discrepancy in the readings.

So, Aston Martin's Sebastian Vettel topped the speed trap readings in qualifying, with a velocity of 317.3 km/h, but the four-time world champion will only line up P11 on Sunday's grid.

Sainz's flyer in Q3 ended in the barriers at Turn 15 but the Ferrari driver, who qualified fifth, believed his effort could have challenged the pole time set by teammate Charles Leclerc's.

Both drivers' top speed and their inherent performance in Saturday's shootout attest to the handy efficiency and productive balance of their SF21 in Baku.

But can the Scuderia's chargers get it done this afternoon along the shores of the Caspian Sea?

Lewis Hamilton and championship leader Max Verstappen, whose Mercedes and Red Bull cars had quasi matching speeds through the speed trap, will be pulling out the stops this afternoon to make sure that doesn't happen.

But one knows that anything can happen in unpredictable Baku. 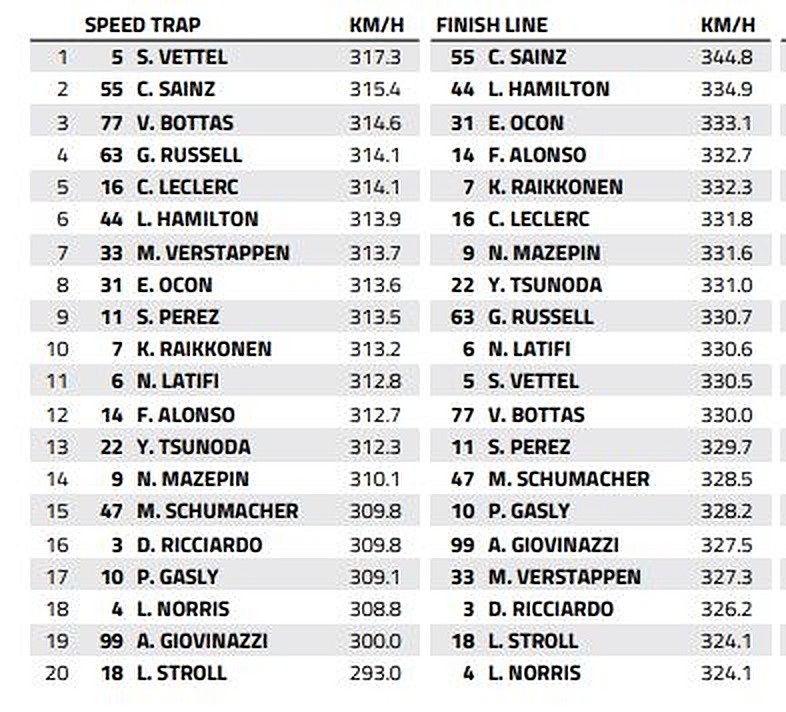