Max Verstappen secured a second successive win at the Red Bull Ring and his third race in a row in 2021, with a comprehensive victory over Mercedes' Valtteri Bottas and McLaren's Lando Norris in the Austrian Grand Prix in Spielberg.

The Red Bull demonstrated even greater dominance this week than last, while Lewis Hamilton suffered floor damage from running over the kerbs that forced him to hand track position to his Mercedes team mate in the closing laps.

Sergio Perez had been forced wide into the gravel during an early restart and was later hit by two penalties for similar moves of his own, dropping the Red Bull to sixth place behind Ferrari's Carlos Sainz at the finish. 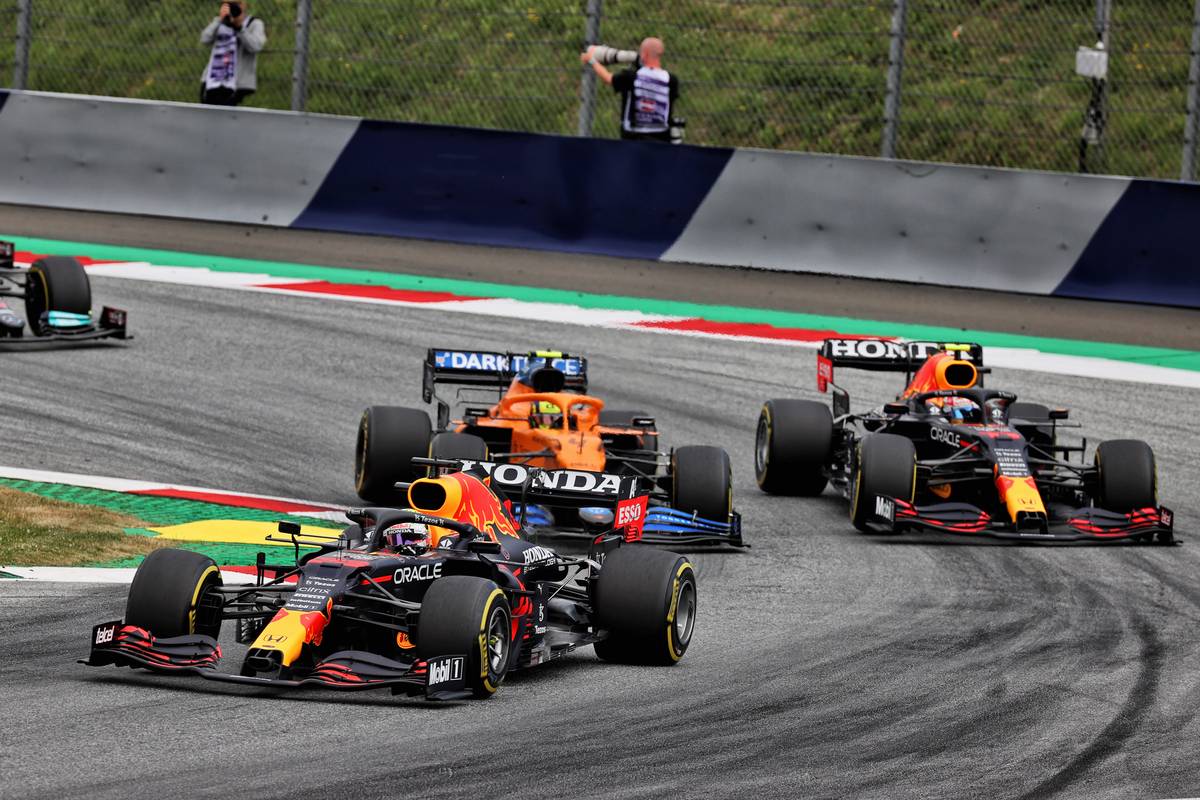 Vague forecasts of possible rain aside, the skies over the Red Bull Ring had cleared up nicely in time for a sunny start to Sunday afternoon's race in Spielberg. With the grandstands dominated by his passionate orange army of supporters, pole sitter Max Verstappen led McLaren's Lando Norris to the front of the grid with Sergio Perez immediately behind followed by Lewis Hamilton and Valtteri Bottas.

Once again it looked as though the best that Hamilton could hope for was to prioritise damage limitation to his world championship campaign. The top five were all starting on the medium tyres, but further back Ferrari had opted to put Carlos Sainz on the hard compound in tenth having already picked up an extra grid spot overnight due to Sebastian Vettel's penalty for baulking Fernando Alonso in qualifying.

Just as he had done last week, when the lights went out Verstappen cut across the front of Norris to ensure there was no chance of losing the lead into the first corner. Perez also got a good start, but came under increasing pressure from Hamilton until the race was neutralised by a safety car after Esteban Ocon got caught in a three-wide pincer move at the back between Antonio Giovinazzi and Mick Schumacher and suffered heavy damage to his front suspension, sending him into the gravel. 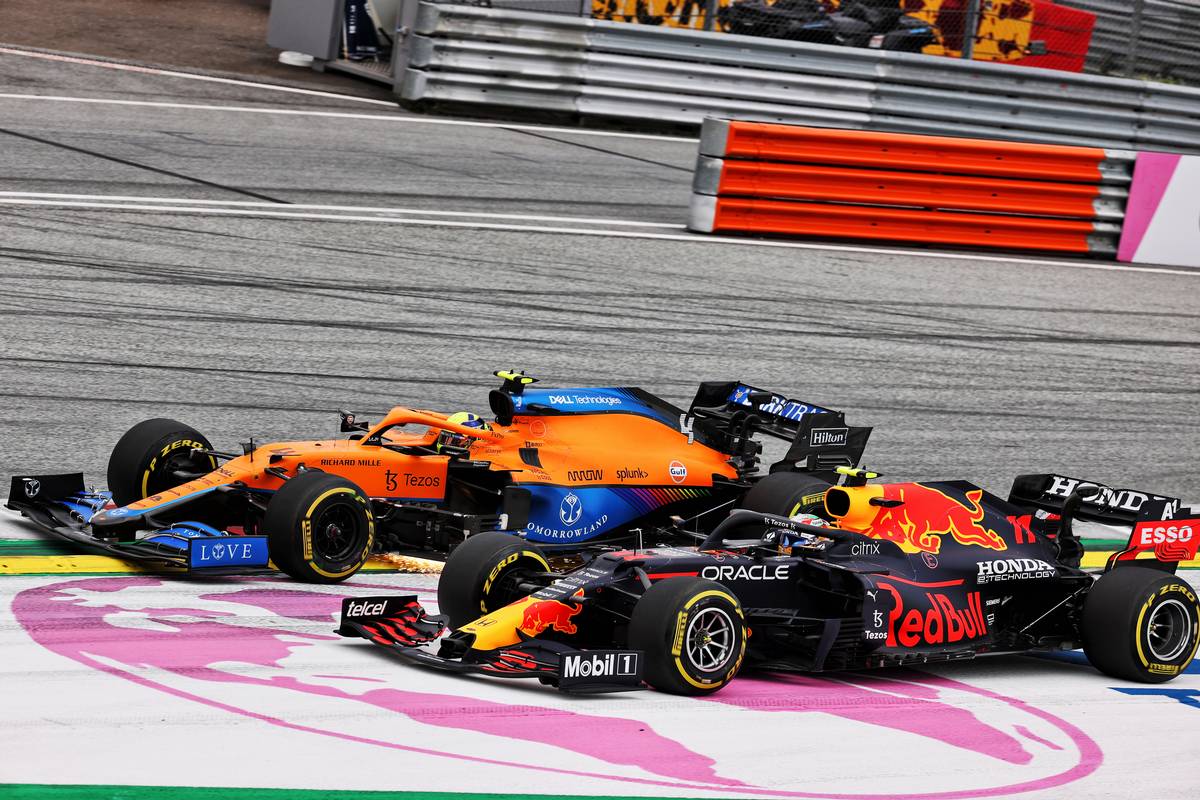 When the race restarted on lap 4, Verstappen backed the pack up which presented some perilous opportunities for those behind him. Hamilton ran right up to the back of Norris but couldn't get past, but it did allow Bottas to briefly pass his team mate. Meanwhile on the opposite site of the track Perez tried to go around the outside of the McLaren only to get pushed wide into the gravel at turn 4, serendipitously opening the door and providing space for Hamilton to counterattack Bottas and emerge in third place.

Outside the top four, the best of the rest were the two soft-shod AlphaTauris with Pierre Gasly in fifth ahead of Yuki Tsunoda, followed by the similarly attired Aston Martins of Lance Stroll and Sebastian Vettel. Daniel Ricciardo had made good progress on the medium tyres to bounce back from a disappointing qualifying, and he was up to ninth. After his brief excursion into the gravel at the restart, Perez rejoined in tenth ahead of Charles Leclerc and George Russell, the Williams having lost four places on the opening lap leaving him running in 12th ahead of Sainz, Kimi Raikkonen and Fernando Alonso in the sole surviving Alpine.

Tsunoda was the first driver to head into the pit lane for an early change from soft to hard tyres on lap 14, with Gasly in next time by and Stroll soon following suit, leaving Vettel as the only driver still running on the softest compound. It meant Ricciardo was now up to sixth with Leclerc seventh having dispatched a struggling Perez, who was now under pressure from Sainz in turn after the Spaniard had successfully overpowered Russell. Vettel finally came in on lap 18, and he returned dead last behind Stroll. 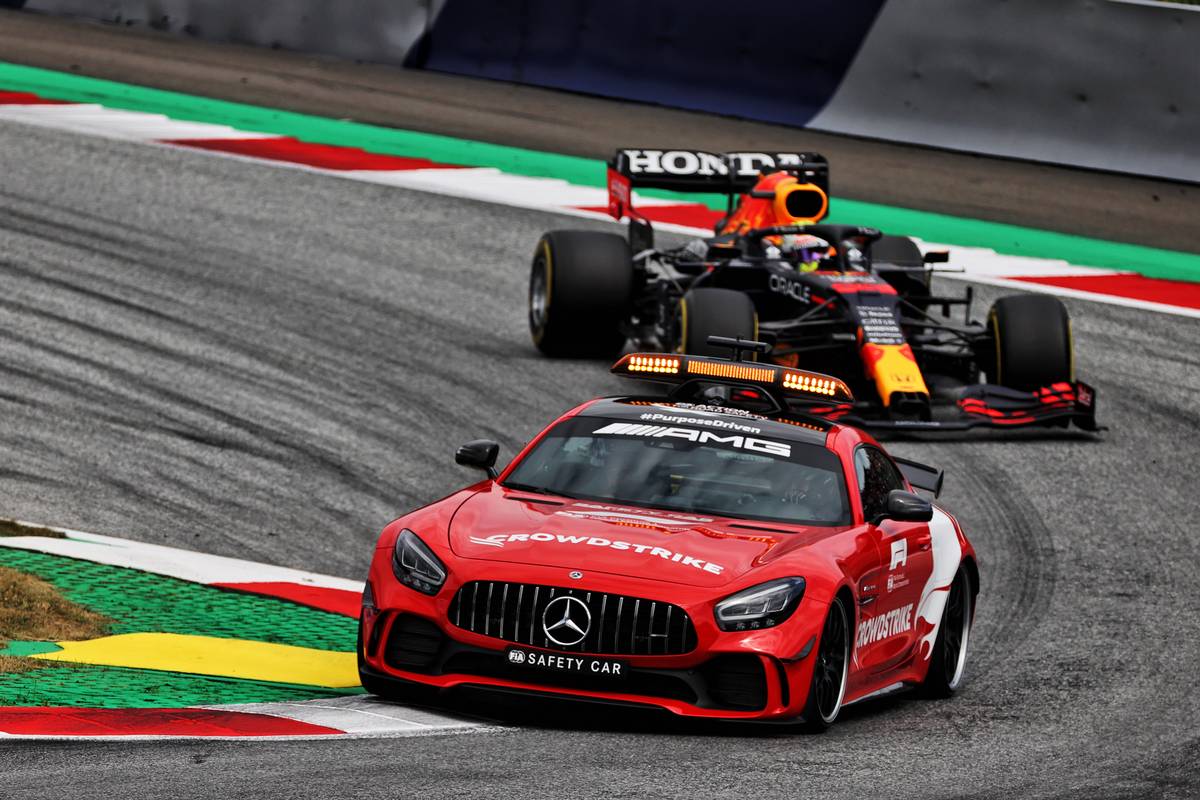 With Verstappen having pulled out a nine second lead at the front, Hamilton had been trying everything he could to force his way past Norris for second, which finally happened on lap 20 around the outside of turn 4. Norris' day took a further turn for the worse when the stewards announced a five second penalty for the way he had forced Perez off at the restart. Also on the naughty list was Tsunoda, who received the same penalty for crossing the blend line at pit entry; and Giovinazzi, who was sanctioned for overtaking behind the safety car.

The first of the drivers who had started the race on mediums to come in for service was Ricciardo, who took on a new set of the hard compound on lap 30. Norris was in on the next lap with Bottas behind him; the McLaren driver's penalty meant they came out on reverse order but crucially both were still ahead of Leclerc and Perez in fifth and sixth. Hamilton was next to pit and then Red Bull nonchalantly responded by summoning Verstappen in on lap 32. Perez was also in next time by for a slightly sluggish service although by no means as bad as his stop last week. Ferrari waited two laps longer before finally bringing Leclerc in, and he went back out in tenth to fall into line just behind Perez.

With 40 laps complete Hamilton had fallen 16s behind the race leader, having sustained significant damage to the W12's aerodynamic bodywork by running over the kerbs. Any thoughts of winning the race were gone, and now even retaining second place from Bottas who was closing in all the time looked like a tall order. Norris was now in fourth, ten seconds ahead of the still-to-stop Sainz, with Gasly back up to sixth followed by Ricciardo, Perez, Leclerc, Tsunoda, Vettel, Russell, Stroll, Alonso and Raikkonen. Nicholas Latifi, Antonio Giovinazzi, Mick Schumacher and Nikita Mazepin had all been lapped. 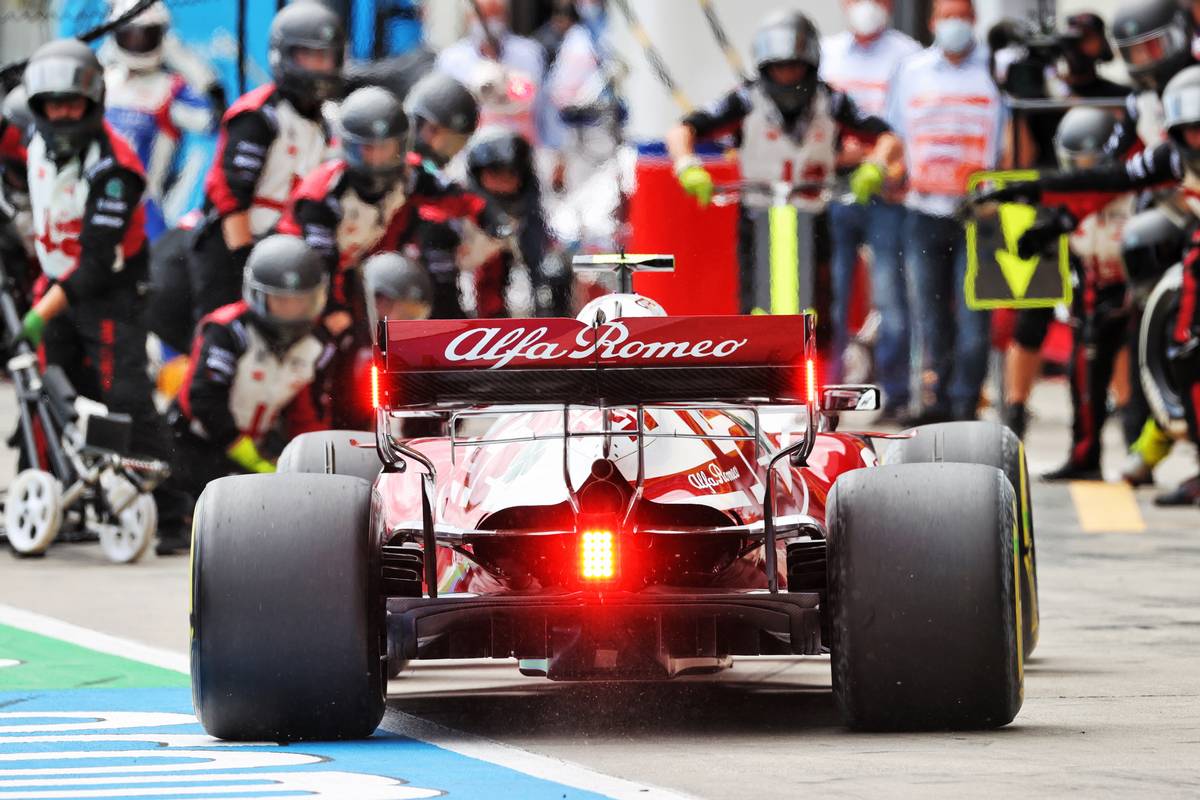 The biggest battle on track was between Perez and Leclerc, and the Red Bull forced the Ferrari wide at turn 4 in a carbon copy of his own fate at the hands of Norris at the restart. In the circumstances it was inevitable that the race stewards would jump on the incident, and sure enough a five second penalty for Perez duly showed up on the timing screens within minutes. A few minutes later and there was another incident between the pair with Leclerc going wheel to wheel with Perez through turn 6 only to once again be pushed wide, and Perez was again handed a penalty. Further sanctions followed for Stroll (speeding in pit lane) and Tsunoda (cutting the blend line again on his second pit stop).

Gasly made his own second pit stop on lap 47 while Sainz stayed out until lap 50 before pitting for the first time to trade his hard tyres for a set of mediums. At the front, Verstappen's Sunday afternoon cruise had produced a 22s lead over the ailing Hamilton, and McLaren were on the alert for a developing opportunity as Bottas was being clearly held up and steadily pushed into the clutches of the young Briton. The Mercedes pit wall then made the surprise decision to switch their cars around, releasing Bottas into second; Hamilton was now so slow that he was passed with contemptuous ease by Norris after which the world champion headed to pit lane in the hope that a new set of hard tyres might alleviate his symptoms. He came back out still in fourth, and with an outside chance of picking up the bonus point for setting the fastest lap of the race on the fresh rubber.

Penalty-magnet Perez had fought his way back up to fifth place and was straining to extend enough of a lead over Ricciardo to offset his ten second penalty. Leclerc was throwing everything he had into his bid to pass the McLaren, while Sainz was closing up rapidly on the pair with the advantage of fresher rubber. Gasly had been lapped in ninth, but he was able to get back on the lead lap when Verstappen pitted for a second time with ten laps to go. Russell was clinging on to tenth place and a precious maiden championship point for Williams, but he was under serious attack from Alonso who had suffered a dreadfully slow pit stop but now seemed all over the back of the FW43B until he ran wide at turn 1, delaying the inevitable pass for another lap. 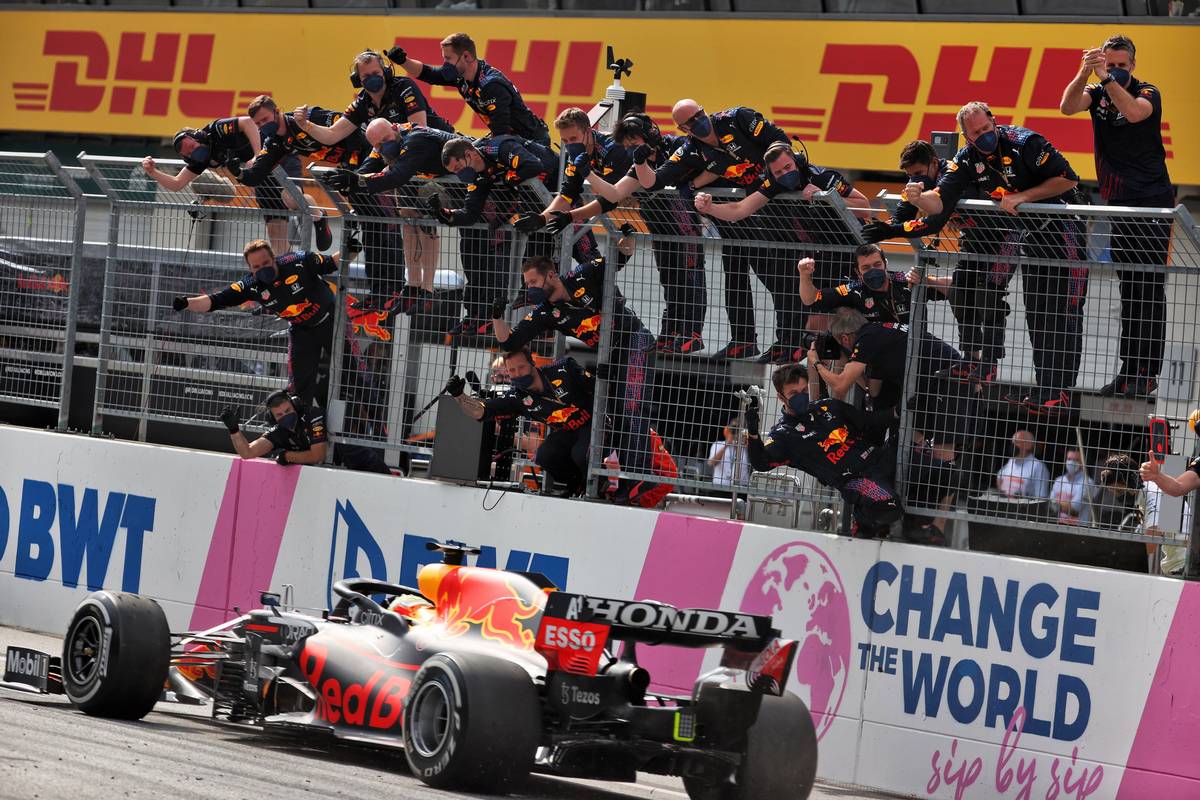 Unsurprisingly, fresh rubber meant that Verstappen immediately nailed down the bonus point for fastest lap. Bottas was unable to do anything to catch the Red Bull and finished second after fedning off a spirited late bid by Norris, while Hamilton held on to fourth place. Perez was fifth at the line but his penalty dropped him behind Sainz, after Ferrari opted to put swap Sainz and Leclerc in the final laps. Ricciardo finished in seventh followed by Leclerc, with Gasly in ninth and Alonso finally picking off Russell with four laps to go to steal the final points position.

A final lap incident between Raikkonen and Vettel handed 12th to Tsunoda followed by Stroll, Giovinazzi and Latifi, with Raikkonen dropping from 12th to be classified in 16th ahead of Vettel after both cars went into the gravel. The two Haas cars of Schumacher and Mazepin had gone two laps down, with Ocon the only retirement.