After the British Grand Prix and Verstappen's 51G crash, Honda sent the unit back to its Sakura base in Japan where several damaged external components were allowed to be replaced.

The engine was then installed in the Dutchman's car for this weekend's round of racing at the Hungaroring, with Honda giving the unit the all-clear after Friday's opening day of running.

However, after further checks were conducted on Saturday, Honda felt compelled to replace the engine for race day.

"During post-qualifying checks we noticed something on Max’s PU which might have developed over the course of the weekend, likely to be an after-effect of the Silverstone crash," Honda explained.

"We have therefore changed it for a new PU of the same specification. According to the regulations, Max is allowed to start from his third position on the grid with no penalty incurred."

Honda has thus introduced a third and final engine into Verstappen's pool of hardware which opens up the prospect of a grid penalty for the championship leader if ever a fourth unit is required at tome point down the road. 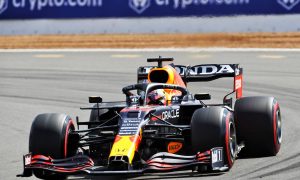 Honda to assess Verstappen engine in FP1 in Hungary