The outcome of Saturday's sprint qualifying race at the Autodromo Nazionale Monza could hardly have gone any better for Red Bull's Max Verstappen.

The Dutch driver was only third fastest in Friday's official qualifying session, with Mercedes drivers Valtteri Bottas and Lewis Hamilton locking up the top two spots.

But the sprint event has turned that upside down, with Verstappen now set to start the Italian Grand Prix from pole while Hamilton is relegated to fourth and Bottas having to get underway from the pit lane despite winning today's race.

That's because Mercedes opted to take on a load of new power unit components this weekend earning him a raft of penalties. As for Hamilton, a poor start in today's 18-lap race cost him three places on tomorrow's grid.

"We had the race better than expected," Verstappen told the media in parc ferme after the end of Saturday's sprint. "We had a good start, we got up to second and we scored some nice little little points.

"It was a good day for us, a good start and from there onwards I tried to follow Valtteri around even though in general we lacked a little bit of pace to really mount a challenge."

But Hamilton gets nothing for finishing outside the top three, meaning he's now five points behind Verstappen in the drivers championship. 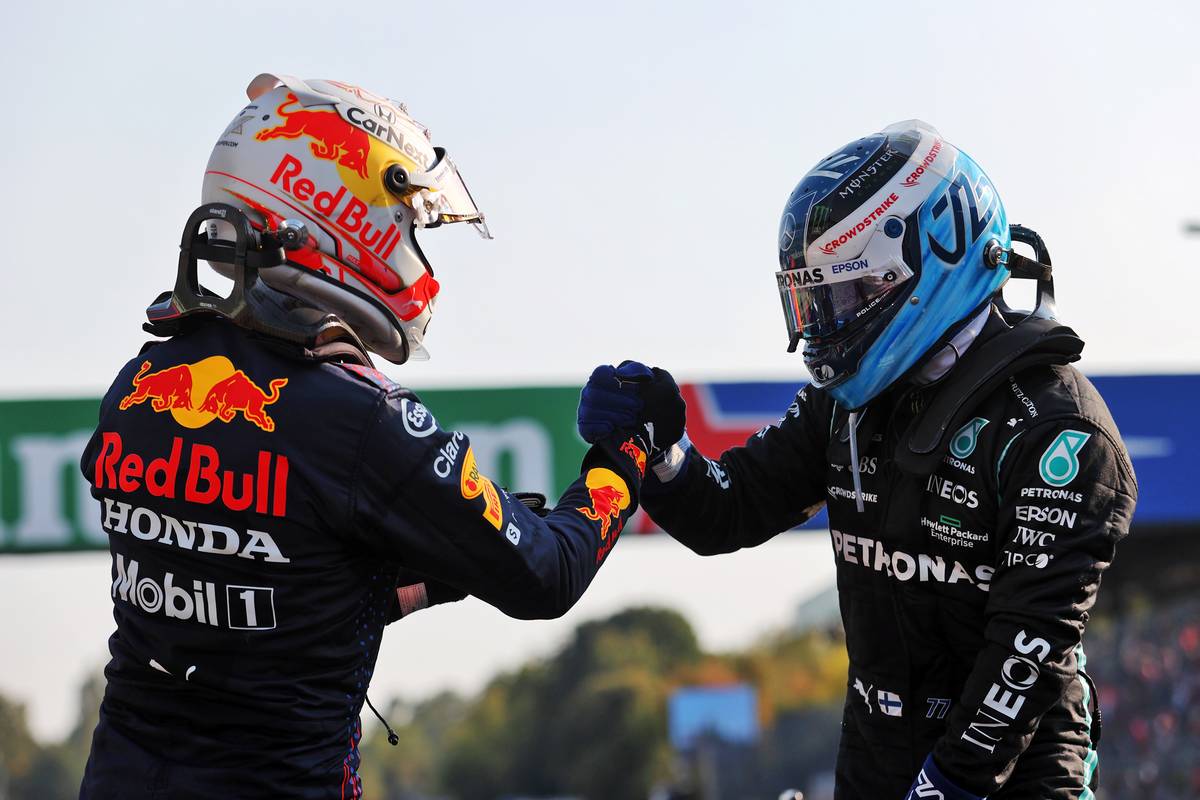 "And of course [we're] starting on pole tomorrow," added Verstappen, although he acknowledged that Mercedes still appeared to have the upper hand at the high speed Monza circuit.

"They still seem very quick but I was giving it all to try and stay close, so it's going to be an interesting battle tomorrow," he commented.

"We did trim our car to have decent top speeds, so I'm not too worried about our top speed in the race.

"But we also know that Mercedes, they have a very good pace also over the whole lap. But nevertheless, we're gonna try and have also a good race.

“I don’t expect it to be a straightforward and easy race, Valtteri coming from the back, Lewis P4 they have a lot of pace, so we’ll see what we can do against them.”

“If you get cleanly through Turn 1 and Turn 2 it’s very good,” he added. “It’s still a decent run to Turn 1 but if you have a good start it should be enough to defend, let’s see tomorrow.”

Verstappen's team mate Sergio Perez started the sprint race from ninth place but he lost out to Antonio Giovinazzi and Lance Stroll in the opening lap.

However the Mexican was able to re-pass Stroll during the race, and with Pierre Gasly retiring on the first lap he will be back in ninth for the start of Sunday's Grand Prix.