Valtteri Bottas was once again the pace setter in second practice for the 2021 Russian Grand Prix at Sochi, finishing just 0.044s ahead of his Mercedes team mate Lewis Hamilton.

Pierre Gasly was third quickest, but ended the session minus a front wing after clipping a particularly savage sausage kerb at the exit of turn 2. Even so, he was a quarter of a second quicker than McLaren's Lando Norris who had a similar edge over Alpine's Esteban Ocon.

Having confirmed his engine change and back-of-the-grid penalty for Saturday, Max Verstappen was a modest sixth quickest for Red Bull.

Alfa Romeo's Antonio Giovinazzi suffered a mid-session accident which triggered a brief red flag stoppage while the car was retrieved after hitting the barriers at turn 8.

Amid growing concern about Saturday's forecast weather causing potential disruption to the Formula 1 schedule, the teams had been conspicuously heads-down in Friday morning's first free practice which as a result was remarkably calm and incident-free save for Lando Norris' mishap after the chequered flag. It looked like being a similarly studious session after lunch, with teams already checking the rule book to see whether a Saturday washout would result in this weekend's grid being set by the outcome of FP2.

Aston Martin's Sebastian Vettel was first of pit lane, with everyone soon getting out with the initial exception of Daniel Ricciardo whose McLaren was just completing a power unit change. Charles Leclerc was out on the soft tyres and set the early benchmark time of 1:35.508s, the Ferrari a tenth quicker than medium-shod Mercedes pair Valtteri Bottas and Lewis Hamilton followed by Red Bull duo Sergio Perez and Max Verstappen. Norris was also quickly up to speed in seventh on the hard compound behind Carlos Sainz despite his end-of-session embarrassment in FP1.

The time quickly started to drop, with Leclerc lowering his time to 1:34.925s to stay 0.069s ahead of Alpine's Esteban Ocon also on the soft compound. His team mate Fernando Alonso endorse that strong run by going quicker and taking over at the top with a time of 1:34.762s. After their initial runs, other cars were heading back to pit lane including Hamilton who managed to overshoot his pit box and clip his front jack man and knocking him off his feet, although he was soon upright again and giving a thumbs-up as Hamilton radioed his apologies. 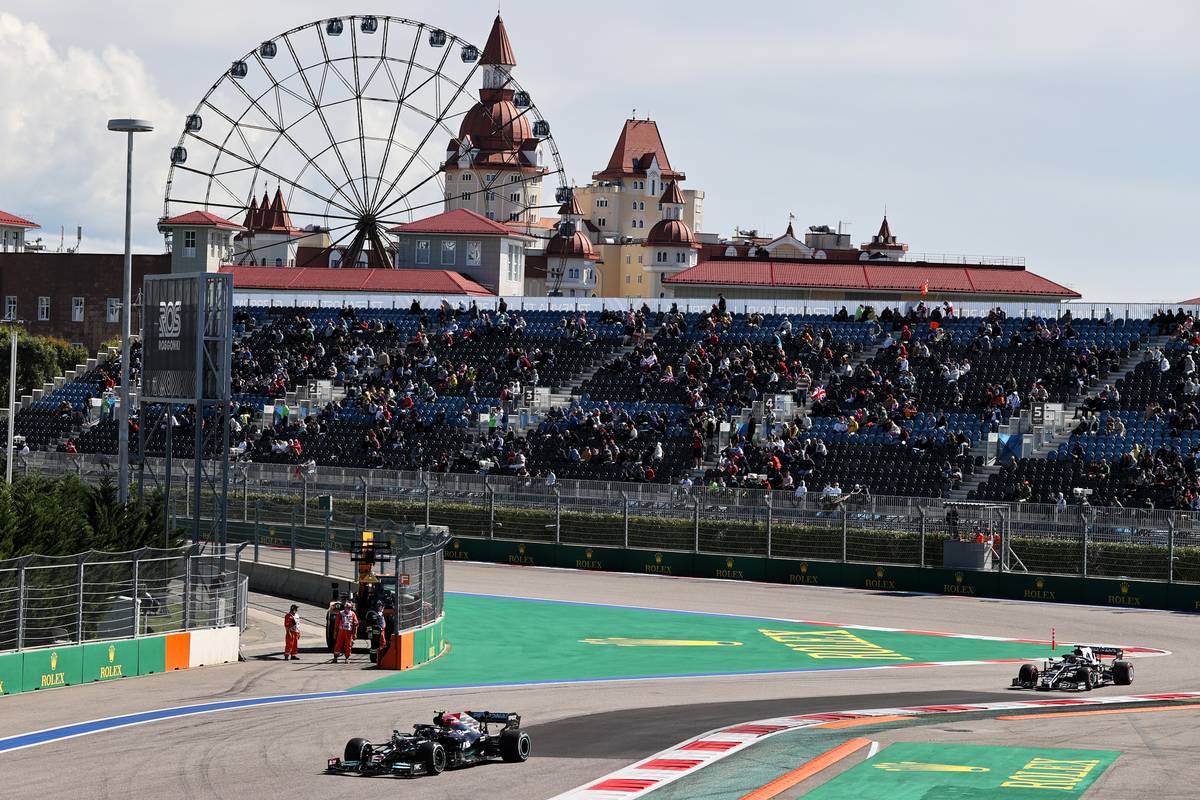 The early move to soft rubber allowed Bottas and Hamilton to move to the top of the timesheets a quarter of a second ahead of AlphaTauri's Pierre Gasly, followed by Norris, Ocon and Verstappen. Sainz was still in seventh ahead of Alonso, Vettel and Leclerc with Perez pushed out of the top ten, 1.345s behind Bottas' best.

Antonio Giovinazzi was down in 14th place as he sought to put in a performance good enough to convince Alfa Romeo to retain him for 2022. Unfortunately he ended up blotting his copybook instead by losing the back end of the car after clipping the kerb at the exit of turn 8, sending him to a hefty impact with the barrier that damaged the rear wing. He initially attempted to drive back to pit lane but was discarding too much carbon fibre in the process meaning that the team ordered him to park immediately.

The red flags came out for the clean-up and also to check the barrier for damage, with the session resuming after a ten minute delay with a littler over a quarter of an hour remaining on the clock. With so little time left, teams swapped to the medium or hard compound in order to focus on race pace meaning that the top times were unchanged.

However even at race pace, Gasly still managed to damage his car on the raised sausage kerbs at the exit of turn 2 which stripped the front wing off the car even as the chequered flag came out to call proceedings to a finish.