A late downpour assisted Lewis Hamilton to his 100th Formula 1 victory, with a hard-fought win in the 2021 Russian Grand Prix over Red Bull's Max Verstappen and Ferrari's Carlos Sainz in Sochi.

The Mercedes driver had suffered a poor start and dropped three positions on the opening lap, but he kept himself in contention for the rest of the afternoon so that by the time heavy rain returned with five laps remaining he was able to pit for inters and grasp the lead from longtime leader Lando Norris

Having started from pole position, Norris attempted to finish the race on slicks but aqua-planed out of the lead, meaning that he dropped to seventh despite having controlled 30 of the 53 laps of the race. 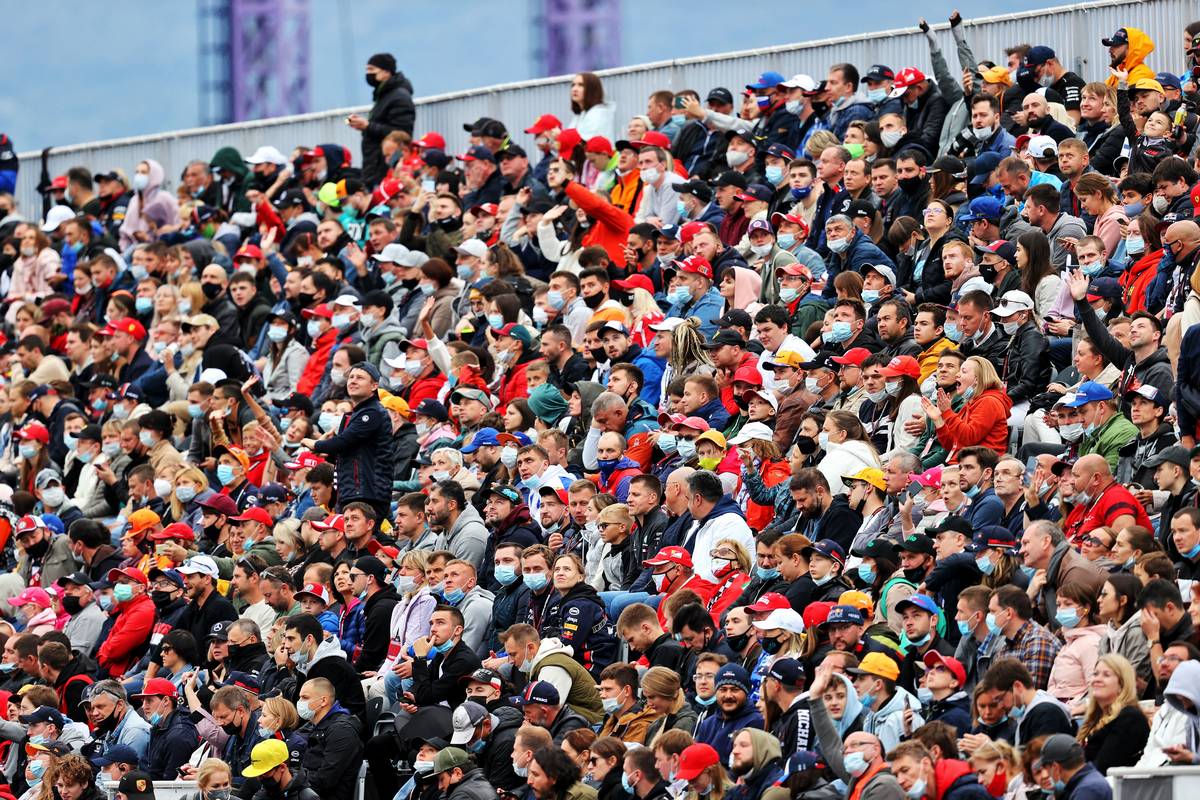 Saturday's rainfall had already ensured a dramatic next-gen look to the head of the grid in Sochi, with Norris on pole for McLaren for the first time in his F1 career. Former team mate Sainz was next to him for Ferrari, followed by an all-British second row in the form of Williams' George Russell alongside Hamilton, who'd had an uncharacteristically messy end to qualifying the day before. With a free choice of tyres, all had elected to start on the medium compound. Meanwhile Hamilton's team mate Valtteri Bottas had joined the growing pack of penalty-hit drivers starting on hard tyres near the back, a new power unit taken overnight having dropped him to 16th just ahead of Charles Leclerc and Max Verstappen on the last row.

After yesterday's inclement conditions, it had been a dry morning on Sunday. However concerns that rain may have some more to say about the proceedings were building with forecasts showing increased odds of showers moving in at some point during the race. For now though the drivers could head to the grid with just one thing on their minds: making it into turn 1, preferably in the lead but most importantly without any race-ending incidents.

Norris got a steady start only to succumbed to Sainz who took advantage of the slipstream into turn 2, while a poor start for Hamilton allowed Russell to assume third place ahead of Aston Martin's Lance Stroll. Alpine's Fernando Alonso also gained places initially but shot across the chicane in doing do, obliging him to hand fifth place back to McLaren's Daniel Ricciardo and slot back in ahead of the struggling Hamilton. The reigning champion was finally able to steady the ship, and then quickly dispatched Alonso into turn 4 on lap 2 to regain one of those lost positions. After that he put in the quickest lap of the race so far to keep him within DRS range of Ricciardo. 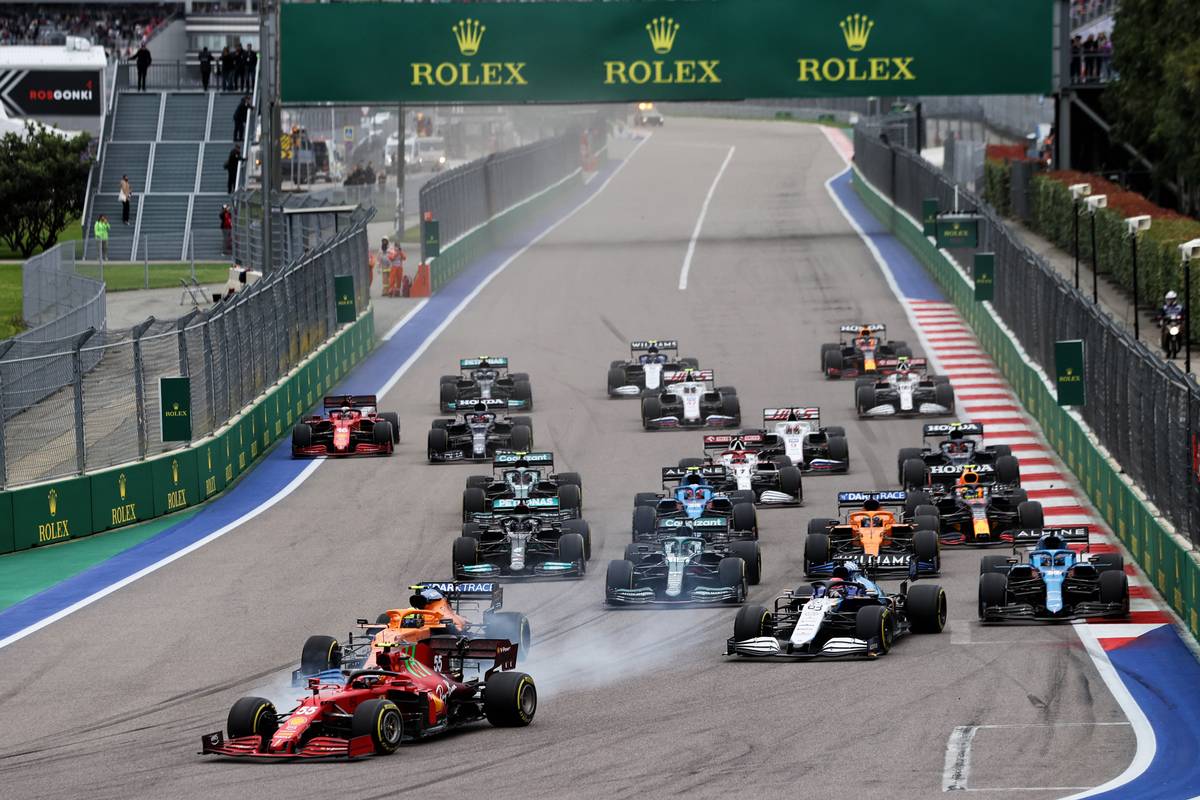 Further back, Leclerc had a flier from 19th and was already up to 12th. However by contrast Bottas only made up one place to 15th keeping him just ahead of Verstappen while AlphaTauri's Yuki Tsunoda had suffered the worst start and was at the back, leaving him trying to find a way back around Haas' Mick Schumacher.

Sainz soon pulled two seconds clear of Norris, and the pair had pulled out a big gap over Russell who was keeping Stroll, Ricciardo and Hamilton bottled up behind him. Having taken his turn passing Alonso, Sergio Perez (also on the hard tyres) was now running close to the back of Hamilton while Verstappen had found his way past Bottas down the inside of turn 13 on lap 7 meaning that he was already up to 14th, the Finn struggling to find any way of recovering the dropped position. Verstappen then put Pierre Gasly between him and the Mercedes to bolster his prospects and he set about bearing down on Leclerc.

Tyre wear was now beginning to be an issue for many of the drivers, with Sainz already noticeably slower which allowed Norris to slash the gap between them. It gave the McLaren the opportunity to make some probing strikes on the race leader, although it was still proving impossible to complete the pass. Further back Verstappen had been applying pressure on Leclerc, who in turn was busy trying to find a way past his former team mate Sebastian Vettel. The end result was the Ferrari being forced across the sausage kerbs, which broke his momentum and allowed the Red Bull to pick up 12th place. 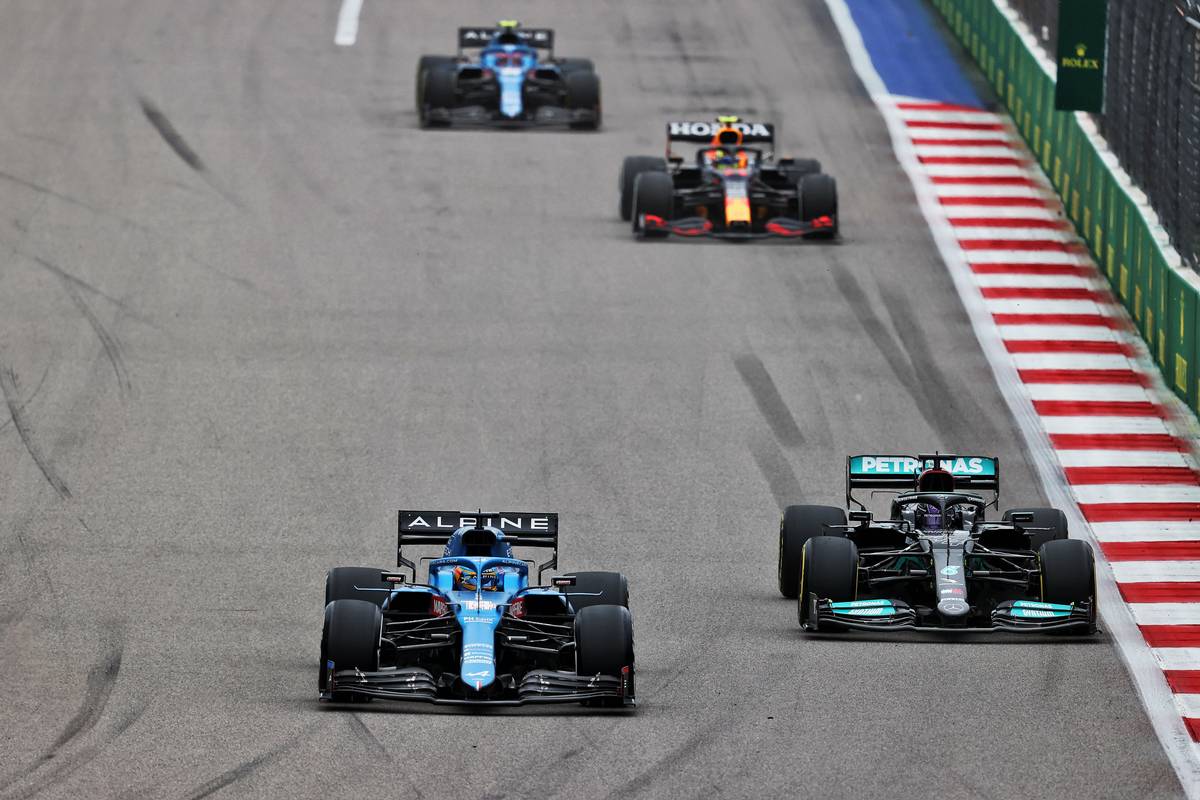 Stroll was the first of the leaders to pit on lap 13, coming back out behind Bottas on a new set of hard tyres. Despite having complained that "My front left is completely gone!", Norris used DRS and the slipstream to breeze past Sainz down the back straight on lap 14 to take the lead and pull out a three second lead. Ferrari then called their driver in for his first service which unfortunately wasn't the fastest, leaving him scrambling to get out ahead of Stroll who had already put in a new fastest lap on his fresh tyres.

Norris had stayed out with Ricciardo now up to second place followed by Hamilton, Perez, Alonso, Verstappen, Leclerc and Vettel, but all were yet to make their first stops, compared to Sainz who was in 13th followed by Stroll and Russell. Hamilton continued to labour to find a way past Ricciardo to no avail, allowing Norris to pull out a 12s lead at the front, while Hamilton found himself backed up into the clutches of Perez even as Verstappen materialised on Alonso's rear wing with Leclerc not far behind.

Ricciardo finally pitted on lap 23 and suffered a frustratingly slow stop. It meant that he came back out in 14th behind Ocon, Russell and Stroll, effectively no longer in contention for a podium. Hamilton stayed out in clear air and immediately put in a series of flying laps that took chunks out of Norris' lead every lap, with Perez doing well to stay with the Mercedes. As that played out ahead, Verstappen was finding Alonso a tough nut to crack and he was increasingly aware that the momentum was going in his rival's favour. And just when things were getting increasingly tense came reports of light drizzle on pit lane. 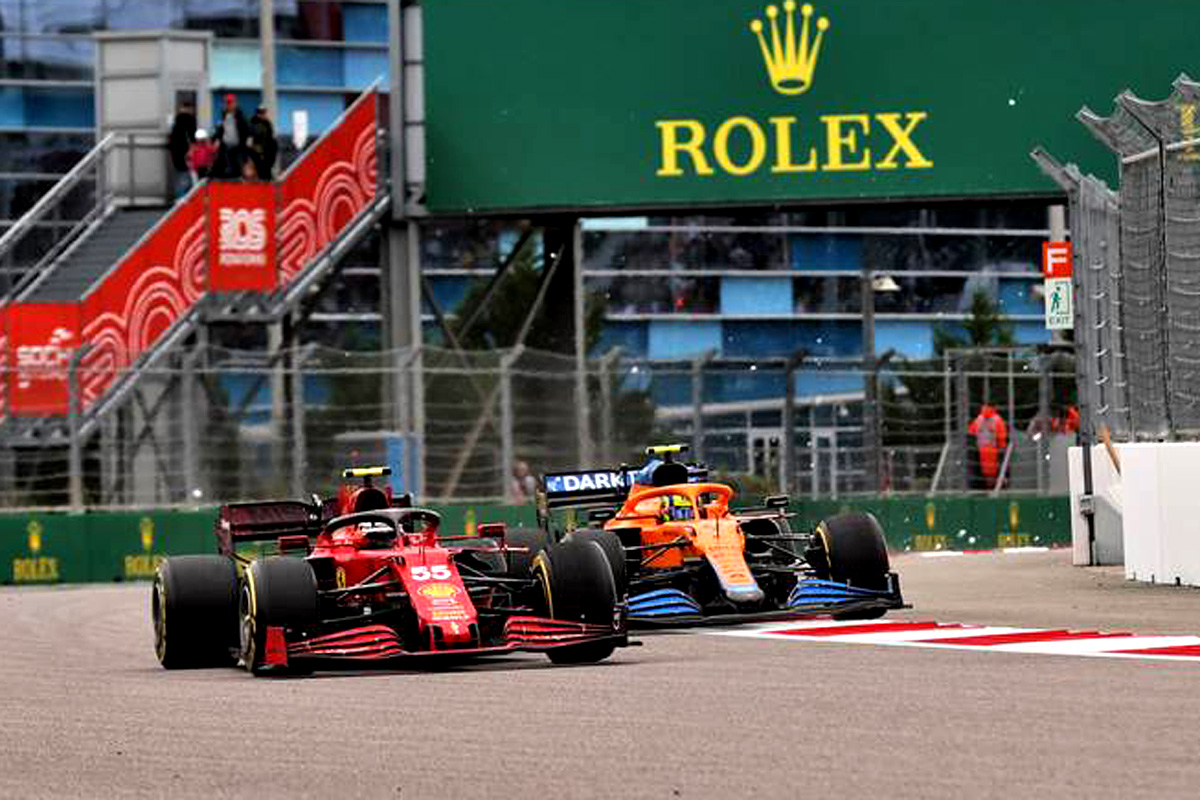 Hamilton opted to make his pit stop on lap 27 for a new set of hard tyres, while Verstappen followed him in for mediums. A tidy stop meant Hamilton returned to the track in ninth between Stroll and Ricciardo, with Verstappen back out in 12th ahead of Russell who was swiftly dispatched. Two laps later McLaren called in Norris, and he received a much better service than Ricciardo had a few minutes earlier to put him back out in fourth ahead of Sainz, temporarily handing the lead to Perez followed by Alonso and Leclerc.

Fresh tyres meant Hamilton had no trouble passing Stroll for P7, and he then pulled off a pass on Sainz at turn 2 on lap 30 prompting team boss Toto Wolff to materialise over the Mercedes radio to declare that Hamilton now had a strong chance of winning the race once all the pit strategies played out. Next lap around, Hamilton proved the point by claiming the scalp of Gasly to claim fifth, while a new fastest lap brought him within five seconds of Norris. Meanwhile Verstappen had also taken care of Stroll and was into the top ten, but with Ricciardo and then Sainz still to take care of ahead of him.

The race had completed 34 of 53 laps when it acquired its first retirement in the form of Mick Schumacher, who was told by the Haas pit wall that there was a worsening situation on the VF-21. "We can't resolve the issue," his race engineer lamented. Williams' Nicholas Latifi would also fail to last the difference, retiring with six laps remaining after getting caught out and clipping the barrier at turn 7, damaging the rear wing of the car.

Fresh tyres meant Norris and Hamilton quickly found their way past Leclerc, the Ferrari then pitting but suffering a slow stop after a delay fitting the left rear. Perez pitted from the lead on lap 37 but also suffered a nightmare delay on the rear right, an unusual occurrence for the normally inch-perfect Red Bull pit crew, dropping the Mexican to fifth ahead of Verstappen. Alonso stopped at the same time, came out behind Verstappen and then made an opportunistic lunge on the Red Bull that managed to pay off. 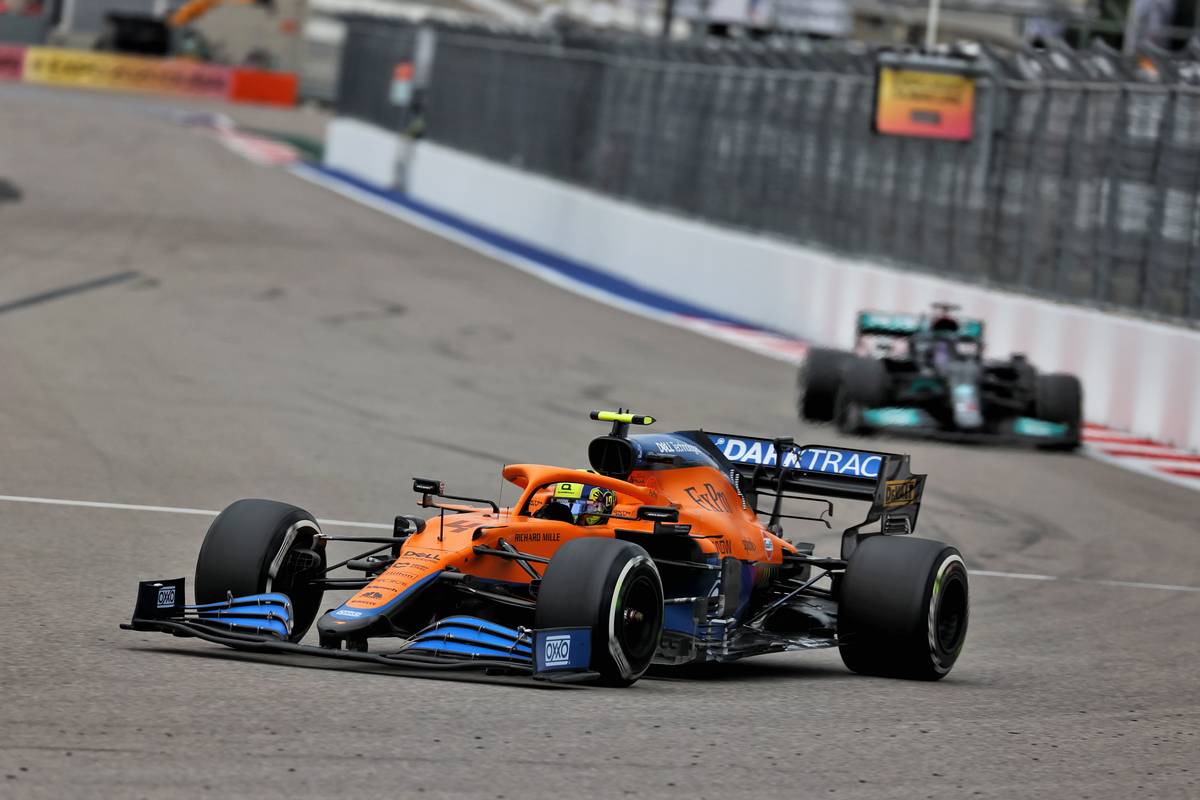 The final pit stops meant Norris was back into the lead, but his advantage over Hamilton was now under two seconds. Both were almost 25s ahead of Sainz, Riccardo and Perez, Alonso now in sixth from Verstappen, Stroll, Russell and Ocon. But just as the things looked to be settling down with 12 laps to do, the Ferrari pit radio declared: "Expecting light drops in around 10 laps!" even as Leclerc thundered past Kimi Raikkonen and Esteban Ocon in quick succession to return to the top ten, soon followed by a pass on Russell for ninth.

Drivers soon confirmed there were spots of rain appearing on their visors. And on lap 46 the dreaded sign of people in the grandstands starting to put up umbrellas meant that the forecast rain really had officially arrived. A lap later, Norris slid wide at turn 5 but Hamilton wasn't able to take advantage of the opportunity as everyone started to struggle in the affected areas. The McLaren skated off again on lap 48 and the rain was now clearly picking up in intensity. With parts of the track getting seriously drenched it was clearly time to consider moving to intermediate tyres.

While several drivers including Verstappen and Bottas bowed to the inevitable and pitted, Norris and Hamilton initially resisted. Hamilton reported that the rain was stopping only to be told by the Mercedes pit wall in no uncertain terms that more rain was on its way and ordering him to pit, with which he duly complied. Norris tried to tough it out but the conditions were now deteriorating fast, and the McLaren slid into the barrier on lap 51. While he was able to resume, his pace was now so slow that Verstappen was able to snatch second place and a belated visit to pit lane for inters was inevitable. Leclerc was in a similar situation, as he plummeted out of the points before finally switching to inters with two laps to go. 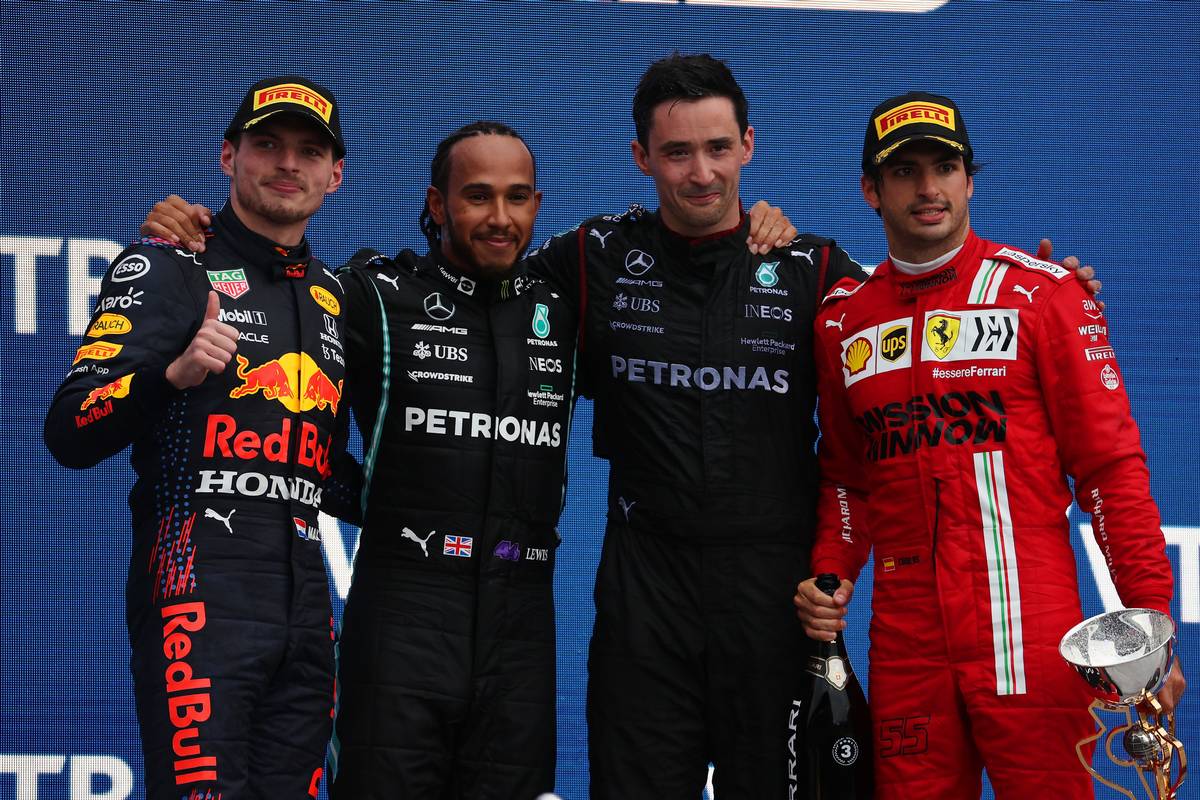 After all that mayhem, Hamilton emerged with his 100th Grand Prix victory by a whopping 53 second margin over Verstappen giving the Briton a two point lead in the drivers championship and extending Mercedes' lead over Red Bull in the constructors championship to 33 points. They were followed across the line by Sainz, Ricciardo, Bottas and Alonso. After returning to the fray, Norris was at least able to pass Raikkonen for seventh on the final lap, with Perez and Russell claiming the final points of the day.

Aston Martin pair Lance Stroll and Sebastian Vettel finished just outside the points after making contact in the fraught few final wet laps, followed by Gasly and Ocon. Leclerc finally splashed across the line in 15th ahead of Antonio Giovinazzi, Yuki Tsunoda and Nikita Mazepin, with Latifi and Schumacher the two non-finishers.