The battle between Mercedes and Red Bull involves many variables, but when it comes to straight-line speed the Brackley squad definitely has an edge.

In terms of car set-up, Turkey's Istanbul Park is considered a 'middle of the pack' circuit, because the layout's downforce and power sensitivity characteristics are pretty average.

Drivers don't spend as much time at full throttle around the track compared to other circuits, but they're nevertheless at full blast on the run between Turn 10 and Turn 12, the section at the end of which is located the speed trap.

Charles Leclerc gets bragging rights for clocking in with the highest velocity, the Ferrari driver reaching a top speed of 333.9 km/h.

But it's perhaps more relevant to focus on the straight-line speed momentum of Mercedes and Red Bull.

Valtteri Bottas and Lewis Hamilton, who set the pace in qualifying, displayed an almost equal level of high velocity. But the pair were over 5 km/h quicker than Max Verstappen.

Red Bull team boss Christian Horner admits to being puzzled by the top speed delta between the two outfits.

"Mercedes is extremely fast on the straights despite the downforce they are running," said Horner after qualifying. "We've been observing that since Silverstone now. There is something strange about it."

The Red Bull team boss didn't elaborate on his comment, but he'll perhaps be thinking that Mercedes' straight-line speed advantage could be the crucial edge it needs for Hamilton to prevail against Max. 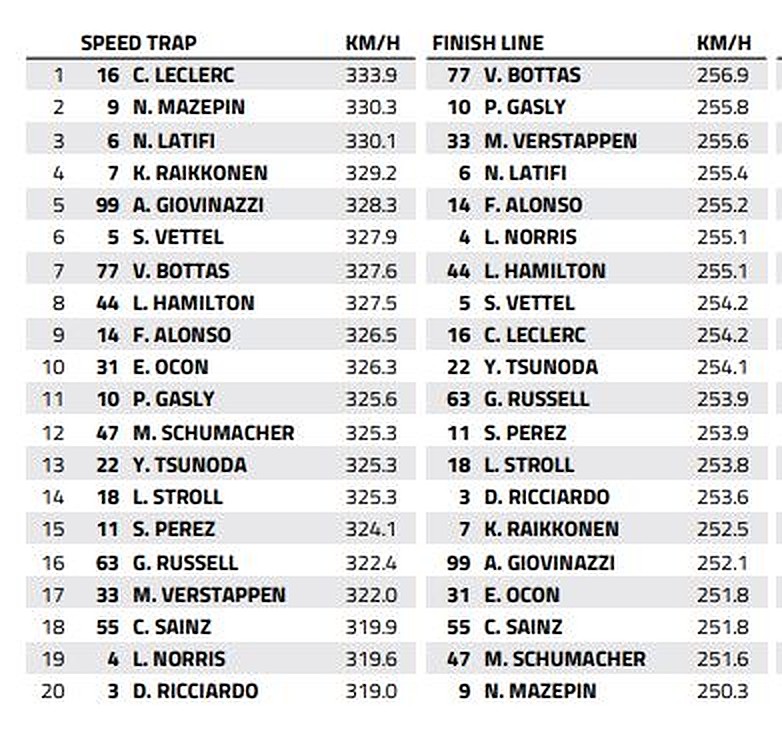 Sainz: Plan to knock out rival in Q1 'perfectly executed'

Ricciardo to start Turkish GP from back of the grid!