The FIA has published a record 23-race draft calendar for F1 that will unfold in 2022 and which includes Imola, with the Italian venue replacing China.

The draft schedule was published on Friday following a meeting of the FIA's World Motor Sport Council.

Grand Prix racing's 2022 campaign is set to kick off in Bahrain on March 20 and conclude in Abu Dhabi on November 20, which implies that 23 events will compressed into an eight-month period.

Although China was initially expected to be reinstated next season, Shanghai was discarded once again due to the Covid pandemic. However, the Emilia Romagna Grand Prix at Imola will be back on April 24 subject to confirmation of its contract with FOM.

The highlight of next year's agenda will be F1 performing in Miami on May 8, while Barcelona is set to kick off in earnest the sport's European season.

The main reason for F1's compressed schedule is the need to conclude the season before the start of the 2022 World Cup in Qatar. But the constricted calendar has inevitably led to two triple-header legs.

"The impressive 2022 FIA Formula 1 Championship calendar is the result of the great work made by Formula 1, led by Stefano Domenicali and his team, in strong synergy with the FIA," commented FIA president Jean Todt upon the release of F1's 2022 schedule.

"Over the past two years, F1 has shown remarkable resilience. This is clearly demonstrated by the continued growth of the sport despite the important challenges of the pandemic.

"The 23 Grands Prix in 2022 will be an exciting showcase for the all-new cars and I am looking forward to it." 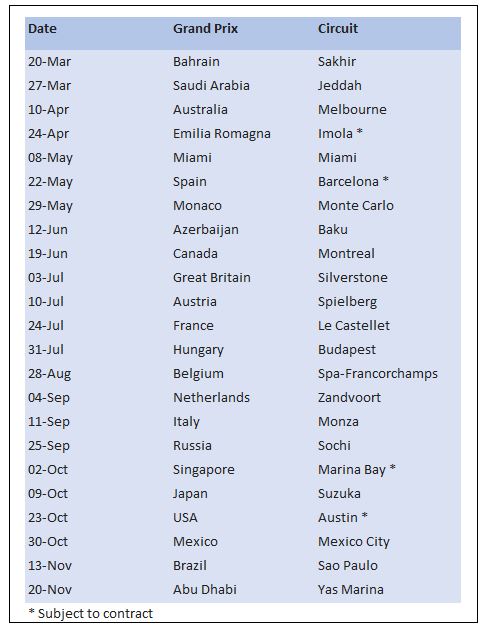